What am I listening to? 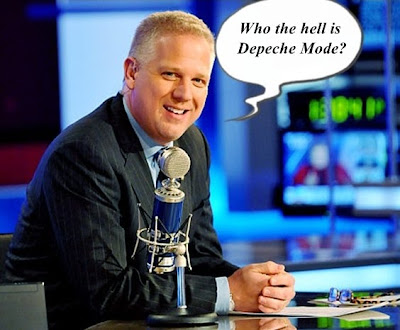 It's no secret that I despise commercial Top-40 radio. I make that point known every few weeks or so when I review the latest offerings of pop radio, and generally shred them.

In the car I usually listen to talk radio, for three reasons. Firstly, I'm by myself in the car most of the time & can listen to talk without fear of annoying a passenger. Secondly, it educates me and stimulates my cerebrum. It keeps me on top of the fluid situations of the day. And lastly, it keeps me awake. Remember, I get up at 0230AM for work and leave at 3AM. If I just listened to music, it's way too easy to just mentally tune it out and nod off into highway hypnosis, a sure way to end up in a ditch or wrapped around a tree. With talk radio, I have to pay attention to the discussion and keep alert, wrapping my mind around what the host is saying and formulating my own thoughts on the matters.

Now, at 3AM, one would think I'm listening to that mainstay of night-time talk, the tinfoil hat conspiracies and ghosts and aliens and what not talked about on Coast to Coast AM. You know, the Area 51 stuff first made popular by Art Bell and then taken over by George Noory. I listen occasionally but a lot of what they discuss there is what I consider kook-fringe stuff like alien abduction, remote viewings, and ghosts. Instead, I've started listening to the Midnight Trucking Radio Network, a really great conservative show hosted by Eric Harley & Gary McNamara out of Dallas & syndicated nationwide. I found them by accident about 4 months ago on, of all things, AM-760 WJR out of Detroit. Yes, Detroit; I'm picking it up from almost 700 miles away.
Once I get into Charleston I usually lose the feed, though not always, and switch over to All Night With Jason Smith on ESPN. Sure, the only sport I truly follow is hockey, but I like to stay up on things so that I don't sound like a dolt in a sports-related conversation. I find 99% of all sports talk to be excruciatingly dull but Smith delivers a fun, offbeat, laid back show without coming across as a pompous know-it-all.

During work hours (4AM to whenever) my radio time is limited. Occasionally I work alone and blessedly my MP3 player has an FM receiver built-in, so I'll often listen to my local FM talk station's morning show for news updates & stuff. I'm friends with the hosts on Facebook so it's not like I'm listening to strangers but rather spending the morning with folks I know. (Big shout out to Kelly Golden & Kyle Mercier at 94.3 WSC!)

At 9AM, it's Glenn Beck when I can. I know, it's kinda cliche and I'm anything but cliche. Beck is polarizing and the Left despises him. I think he's funny as hell most mornings, and very engaging. He's sincere, almost to a fault. His crying jags are melodramatic and he's a bit religious-preachy for me at times. But I really enjoy his show and actually prefer it to Rush Limbaugh.

Speaking of Rush.....I've always had a love-hate relationship with Rush. I started listening in the mid-90's and found his whole "America Held Hostage: Day (whatever )" intro to the show during the Clinton years was melodramatic, and his blatant ass-kissing of Newt Gingrich got old fast., always referring to him as "Mister Gingrich" in a smarmy hero-worship tone. At times he sounded like the Joseph Goebbells of the GOP, a mouthpiece for the Republican Party who would blindly agree with anything with an "R" after their name. However.......

Since Obama was coronated, I've buried my hatchet with Limbaugh. He's a lot funnier now, and I think the humor is what's warmed me up to him again. It's not so much that he's toned down his rhetoric, but that it's no longer just rhetoric to me. He declared war on a hostile adminsitration hell-bent on destroying the nation, and he's spot-on with his observations. We've got a lot more common ground now, and I listen to him on my way home, especially since he's up against Ryan Seacrest's sugar-coated crapfest on pop radio. My only real beef with Rush's show now is one that I've always had: his callers. Oh my GAWD what a sycophantic bunch of ass-kissing idol-worshipping goobers. The first 30 seconds of every call is a verbal fellatio session full of plattitudes and ball-fondling. Then he feigns humility, humbly thanks them, and then they drone on with some obvious point or other. I listen to the monologues and such and then flip the station when he takes calls.

After Rush, the fun continues. There's a brilliant show syndicated out of Tampa that you should check out. The Schnitt Show, hosted by Todd Schnitt, is funny, irreverent, insightful, and well worth the listen. If he's not carried locally for you, he's also on XM/Sirius on the Extreme Talk channel.

I don't listen to Hannity, mostly because no one locally carries it and because I can only listen to so much "serious" political talk in a day. I can't get past Michael Savage's voice; sorry. Likewise, I trouble listening to Mark Levin. I know most of you love the guy but his voice grated on me the few times I've been able to catch his show. Dude's a genius, and I liked what he had to say, but my local stations don't carry him and, well, the voice thing.....

solsbury hill is peter gabriel's greatest song. funny, i used to listen to coast to coast when i worked 3rd years ago. because i worked over tonite i turned it on after reading this. seems their changing the format to a cooking show called toast to toast, or some bullshit. what the hell. i always got a good chuckle out of the "mork from ork took me and sexed me up" callers.
and i could also listen to the wings games on 760 at nite, on their west coast swings, before satellite radio and them switching to a different am station for their play by play.

I listen to Schnitt over the internet. Didn't know anyone else who listened until now.

I love the guy! Our local FM talker (yeah, an FM talk station!) carries him live.

Dude, you have one helluva early start!

I used to listen to Beck, but here lately it seems like it's the end of the world for three hours a day every day. I can only take him in bits.

I like Rush well enough; he does seem a lot funnier than he used to.

I LOVE Savage, but my work schedule keeps me from hearing him often, and unfortunately he doesn't have a podcast.

A couple of the podcasts I listen to is the "Make it So" Star Trek podcast, and of course, AOW's show, the Gathering Storm.

I am also listening radio, and i like mostly daily news and songs program.
but i am impressed, as you described your routine.