A differing viewpoint on women in combat (from Guest Blogger Jim) 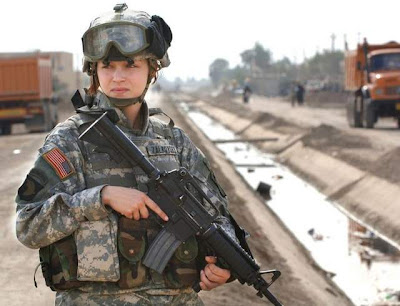 Half the fun of being a grown up is that you can be the best of friends with people and have different opinions on things and it doesn't alter your friendship, and often times you can reach a middle ground quite easily.

My old Army buddy and fellow MP Jim from over at the Oh, Bama Files wrote this piece about the same time as I was writing mine about women in combat, and Jim brings about the very valid point that if women are to serve in the traditional combat arms fields in the military, by which we mean Infantry, Armor, Special Forces, and the jobs in Artillery and Engineers that heretofore had been closed to women, then they need to perform to the EXACT SAME STANDARDS as their male counterparts.  More on that after his piece.


Well, I wanted to put something up sooner and got side tracked; now it appears that I am jumping on the band wagon.  So be it.

I do not want to see women serve in the combat arms branches of the armed forces.  Sorry, call me old fashioned, but i just do not believe that women are capable of taking the day to day grind of sustained field operations that occur in the direct-action units which comprise combat arms.


In looking at an old APFT (Army Physical Fitness Test) card I refreshed my memory to the fact that women in the 17 to 21 year age range could do 24 fewer push ups than men of the same age, and receive a score of 100 in that category. Guys who completed the same amount would only receive 76 points. In the timed 2-mile run, women would get 100 points for a time of 14 minutes and 54 seconds; second class citizens (men) would get a 70 for the same time in the same event. Assuming our male and female test subject did the same 90 sit ups, our male would get a 244 on his APFT, good for 21 promotion points; the female soldier a perfect 300 score, good for a whopping 50 promotion points. What does that mean?  Simple: she does half the work and reaps more than twice the benefits of her male peer.

Now, I think a legitimate reason to put women into these units would be if we could not fill the spots determined by the budget with men. This is not, and has never been, the case.  Have you heard of, or can you recall any stories of the Army or Marines being incapable of filling their infantry slots?  No, you can not.  And one the reasons for this is while you may come into the Army to be in the Intelligence branch, all it takes to send you to the grunts is failing some test, or being a fuck-up, or the loss of your security clearance. It's called the needs of the army.  The primary reason this also is not a problem is because young guys WANT to do these things. It's cool and macho. How cool are you if they let girls do it? 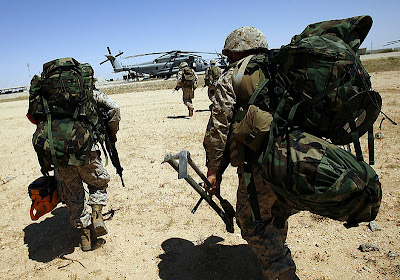 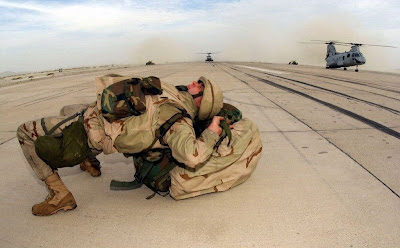 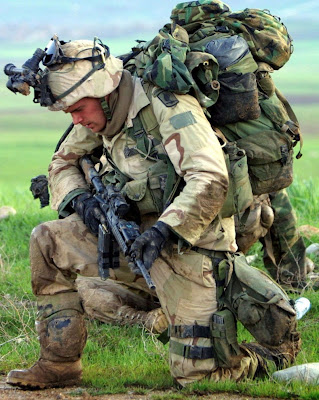 Over at IT DON'T MAKE SENSE, they posted a letter by a female Marine officer. While it may not be indicative of all all women in combat experiences, it certainly offers insight. My good buddy Steve, over at GLOBAL DOMINATION, seems to think that the time has arrived to allow women into the field units. Steve makes a STRONG case for this and while I disagree, I respect his view as we served together.  He has forgotten though the things that kept female soldiers limping along on field problem all those years ago.

In our units the new "men" got to carry the Pig or Hog; the M-60, a 26-pound belt fed machine gun. It was a rite of passage.  Go to the field and guess who was on the bleed, unable to "hump the pig" due to cramps?  Let's say you are getting ready to deploy to a hot spot as a company commander of an infantry company made up of 30% women, and half report they are pregnant?  Guess who just lost 15% of their combat effectiveness without a shot even being fired?

We need to stop trying to be all things to all people, and remember as leaders we CAN NOT (nor should we try to) make everyone happy all the time. I still respect and honor your service, ladies, but unless you WILL be judged by the same tough standards of your male counterparts, you should stick to the combat support units.

And fear not, you will still get plenty of opportunities to prove your valor and dedication.


I see Jim's points. The way the Army is set up, women perform to a different set of physical fitness standards based upon the physical difference between men & women. They can get the maximum 300 score on their PT tests by doing fewer pushups, fewer situps, and by running slower than men. And when you're competing to make Sergeant or Staff Sergeant every promotion point counts, and using Jim's example above the same numbers/times gave the female soldier a 29-point advantage. Another consideration for promotion to Sergeant and Staff Sergeant is the promotion points accumulated by passing PLDC, the Primary Leadership Development Course, and BNCOC, the Basic Non-Commissioned Officer's Course. Both of these schools also include a PT Test, where the female soldiers enjoy that same advantage towards passing that course.

If you want to do the exact same combat job, you should have to meet the exact same standards. Otherwise, folks could get killed and folks may not have a lot of faith in the person leading them or backing them up. It's bad enough to have these situations in combat support units but direct-action units could crumble quickly this way.

My wife made the valid point of how crappy she feels during That Time Of The Month and how for those few days she sure as hell wouldn't feel up to running two miles or climbing walls or anything else, and when you get a group of women together they all end up cycling together pretty much, so is your female infantry unit going to be combat ineffective for 5 days a month?

How about a female Ranger infiltrating enemy territory on a recon, crossing through a chest-deep swamp as her pad gets soaked through and bacteria-laden swamp water swishes through her tender lady parts? Would the menses attract gators? It sounds like an absurd and misogynistic question but I think these are valid points to consider.

As I said in my own article, this is a seriously complex issue and there are no easy answers. It will be interesting to see what the politically-correct asshats on Capitol Hill come up with.
Posted by Steve: The Lightning Man at 2/03/2013 09:39:00 PM

very nice, thanks for reposting.