Clifford Pittman was born June 8th, 1942 in Port St. Joe, Florida. Orphaned at an early age, he was adopted at the age of 13 by James & Irene Sims and took their surname. After graduating high school in Jacksonville, he joined the Army and later that year married his high school sweetheart, Mary.

In the summer of 1967, Sims was assigned to Delta Company, 2d Battalion, 501st Parachute Infantry Regiment, part of the 101st Airborne Division at Fort Campbell, Kentucky and deployed to Vietnam with the company. On February 21, 1968 Staff Sergeant Sims found himself engaged with enemy forces near Hue City when someone triggered a booby trap. Sims threw himself onto the device, absorbing the blast with his body and saving his squad in the process.

An eyewitness account of the action stated that, "Before the squad reached their destination they encountered a bunker, and SSG Sims took it upon himself to see if it was empty. As he moved forward a booby trap went off and everybody froze. But SSG Sims shouted a warning then dove on it, fatally wounding him. However he had covered the blast with his own body, and thus saved the lives of those in the area..."

Another account stated, "[Sims] also saved his squad by moving them quickly out of the way of a house filled with ammunition which was burning. Just as he got his men away the house blew up. Then on moving toward a bunker a booby trap was set off, and Sgt Sims yelled for everybody to get back, but before they could he threw himself on the device taking the entire blast to save his squad from complete disaster. In so doing he gave up his own life. Each and every man of the 2nd Squad owes his very life to this man.."

Clifford Sims was just 25 when he gave his life in defense of his country and his fellow soldiers. For his bravery under fire, he was posthumously awarded the Medal of Honor. The citation for his medal reads as follows:

For conspicuous gallantry and intrepidity in action at the risk of his life above and beyond the call of duty. S/Sgt. Sims distinguished himself while serving as a squad leader with Company D. Company D was assaulting a heavily fortified enemy position concealed within a dense wooded area when it encountered strong enemy defensive fire. Once within the woodline, S/Sgt. Sims led his squad in a furious attack against an enemy force which had pinned down the 1st Platoon and threatened to overrun it. His skillful leadership provided the platoon with freedom of movement and enabled it to regain the initiative. S/Sgt. Sims was then ordered to move his squad to a position where he could provide covering fire for the company command group and to link up with the 3rd Platoon, which was under heavy enemy pressure. After moving no more than 30 meters S/Sgt. Sims noticed that a brick structure in which ammunition was stocked was on fire. Realizing the danger, S/Sgt. Sims took immediate action to move his squad from this position. Though in the process of leaving the area 2 members of his squad were injured by the subsequent explosion of the ammunition, S/Sgt. Sims' prompt actions undoubtedly prevented more serious casualties from occurring. While continuing through the dense woods amidst heavy enemy fire, S/Sgt. Sims and his squad were approaching a bunker when they heard the unmistakable noise of a concealed booby trap being triggered immediately to their front. S/Sgt. Sims warned his comrades of the danger and unhesitatingly hurled himself upon the device as it exploded, taking the full impact of the blast. In so protecting his fellow soldiers, he willingly sacrificed his life. S/Sgt. Sims' extraordinary heroism at the cost of his life is in keeping with the highest traditions of the military service and reflects great credit upon himself and the U.S. Army. 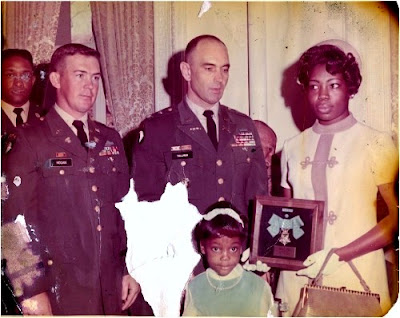 and yet the media only has time for the modern day django, chris dorner during black history month.