Today a warrior was honored 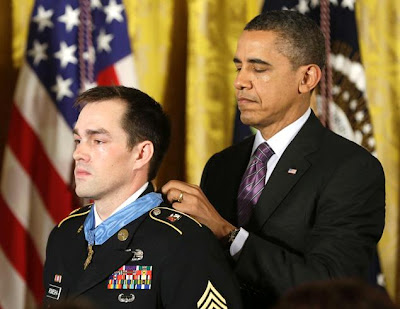 Earlier today, a humble family man and former soldier who now works for an oil company in Minot, ND was awarded the nation's highest award for valor under fire.

Clint Romesha, 31, left the Army in April of 2011, about a year and a half after the battle at Combat Outpost Keating in Afghanistan in October 2009 that earned him the Medal of Honor. Today he donned his dress blues one more time to receive the award at the White House.

Romesha is the fourth living Medal of Honor recipient from the Iraq and Afghanistan wars, and the eleventh overall.


For conspicuous gallantry and intrepidity at the risk of his life above and beyond the call of duty:

Staff Sergeant Clinton L. Romesha distinguished himself by acts of gallantry and intrepidity at the risk of his life above and beyond the call of duty while serving as a Section Leader with Bravo Troop, 3d Squadron, 61st Cavalry Regiment, 4th Brigade Combat Team, 4th Infantry Division, during combat operations against an armed enemy at Combat Outpost Keating, Kamdesh District, Nuristan Province, Afghanistan on October 3, 2009. On that morning, Staff Sergeant Romesha and his comrades awakened to an attack by an estimated 300 enemy fighters occupying the high ground on all four sides of the complex, employing concentrated fire from recoilless rifles, rocket propelled grenades, anti-aircraft machine guns, mortars and small arms fire. Staff Sergeant Romesha moved uncovered under intense enemy fire to conduct a reconnaissance of the battlefield and seek reinforcements from the barracks before returning to action with the support of an assistant gunner. Staff Sergeant Romesha took out an enemy machine gun team and, while engaging a second, the generator he was using for cover was struck by a rocket-propelled grenade, inflicting him with shrapnel wounds. Undeterred by his injuries, Staff Sergeant Romesha continued to fight and upon the arrival of another soldier to aid him and the assistant gunner, he again rushed through the exposed avenue to assemble additional soldiers. Staff Sergeant Romesha then mobilized a five-man team and returned to the fight equipped with a sniper rifle. With complete disregard for his own safety, Staff Sergeant Romesha continually exposed himself to heavy enemy fire, as he moved confidently about the battlefield engaging and destroying multiple enemy targets, including three Taliban fighters who had breached the combat outpost’s perimeter. While orchestrating a successful plan to secure and reinforce key points of the battlefield, Staff Sergeant Romesha maintained radio communication with the tactical operations center. As the enemy forces attacked with even greater ferocity, unleashing a barrage of rocket-propelled grenades and recoilless rifle rounds, Staff Sergeant Romesha identified the point of attack and directed air support to destroy over 30 enemy fighters. After receiving reports that seriously injured Soldiers were at a distant battle position, Staff Sergeant Romesha and his team provided covering fire to allow the injured Soldiers to safely reach the aid station. Upon receipt of orders to proceed to the next objective, his team pushed forward 100 meters under overwhelming enemy fire to recover and prevent the enemy fighters from taking the bodies of their fallen comrades. Staff Sergeant Romesha’s heroic actions throughout the day-long battle were critical in suppressing an enemy that had far greater numbers. His extraordinary efforts gave Bravo Troop the opportunity to regroup, reorganize and prepare for the counterattack that allowed the Troop to account for its personnel and secure Combat Outpost Keating. Staff Sergeant Romesha’s discipline and extraordinary heroism above and beyond the call of duty reflect great credit upon himself, Bravo Troop, 3d Squadron, 61st Cavalry Regiment, 4th Brigade Combat Team, 4th Infantry Division and the United States Army.

i'm surprised obama was willing to touch the man, seeing how he works in the evil oil business.

He earned it doing his job. But he looked more scared on that stage than anytime during the firefight. But he also had a gut-wrenching expression on his face when Obie put the ribbon around his neck. He was humble till the end.

Then to top off his coolness, he turned down Michelle's dinner invitation at the White House, opting to stay with his family and buddies.