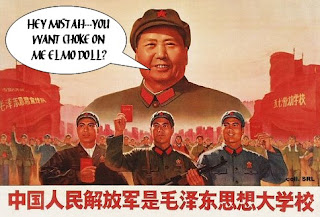 Sooner or later, China is gonna kill us all. Maybe not militarily or overtly, but kill us they will, covertly and through cheap-assed consumer products.

Earlier this year, there was the Pet Food Crisis, where a plastics-byproduct poison, melamine, was found in contaminated wheat germ from China.

Then there was tainted toothpaste made in China, sold to luxury hotels. Nothing like diethylene glycol engine coolant to brighten the smile, no?

And let’s not forget the 450,000 tires made in China recalled at the end of June because of a pesky little problem of…hmmm…the rubber tread separating from the rest of the tire?

Now we have about 9 million toys being recalled for such things as little magnets that fall out that ca be a choking hazard or can be ingested and block a child’s intestines, and the lead-based paint that the USA outlawed in the early 70’s. This follows a previous recent recall of over a million toys for the same lead problem in the paint.

And how do the Chinese deliver their weapons of masses-destruction? Through greedy-assed American businesses like Wal-Mart and all those Dollar Store/Dollar General/Deals for a Dollar/Dollar Days type stores, who buy cheap-assed Chinese goods in bulk for mere pennies and pawn them off on the American public at exorbitant profits. American companies don’t bother to inspect or baby-sit their suppliers overseas so long as they get paid.

In fifty years, America will be devoid of life. After we all die from tainted products, or eat ourselves to death with HFCS and other sugary crap, China will walk in and colonize the cities to deal with their population problems. Then again, they may keep a few of us alive as slaves to work the toy factories….
Posted by Steve: The Lightning Man at 8/14/2007 07:19:00 PM