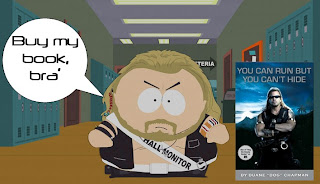 Once again, dear readers, as I do every couple few months or so, I need to ask why…

Why is it the city council of San Francisco is looking to stifle the First Amendment rights to free speech for a private citizen, namely talk-radio host Michael Savage? When illegal aliens in San Francisco said they were going to fast in a hunger strike until they got special treatment, Savage said that they could go ahead & starve. So now all the liberal assclowns on the Left Coast are calling for the government to censor the free speech of a private citizen that they don’t agree with, calling it Hate Speech.

Why are any government officials even paying attention to these aforementioned illegals and granting them rights and privileges reserved for CITIZENS instead of declaring them persona non grata and deporting them?

Why is it a hate crime for the College Republicans at San Francisco State University to stomp on paper copies of flags from terrorist organizations but any asshole can burn an actual American flag and be protected under free speech & freedom of expression? At a small anti-terrorism rally in October 2006, several members of the College Republicans stomped on pieces of paper they had painted to look like flags of the radical Islamic organizations Hezbollah and Hamas (both known terrorism sponsors), copying the designs from images on the Internet. They weren’t even REAL flags. A few days later, a Muslim student filed a complaint, on the grounds that the Arabic script on the Hezbollah and Hamas flags contained the word “Allah.” The university pressed charges, accusing the "blasphemers" of “incivility” and creating “a hostile environment.” Perhaps Muslims ought to have a beef with terrorists who put Allah’s name on their flags, not with people who stomp on paper copies of those flags.

Why is it that my buddy and “adopted” little brother Steve is on his third combat tour in Iraq in 5 years when we seem no closer to resolving that fucking goat rope than we were a couple thousand casualties ago? The ‘war” in Iraq has now lasted longer than our involvement in World War Two; enough is enough.

Why do we venerate Al Gore as the official spokes-doofus for the environment when he’s not even a fucking climatologist? He’s not even a meteorologist, nor even a geologist. His degree from Harvard was in GOVERNMENT, and he dropped out of law school (and divinity school) at Vanderbilt before becoming a career politician. Real climatologists and geologists have been saying for years that Gore’s Global Warming Apocalyptic Armageddon Psychobabble is a crock of shit full of more flaws than the Titanic, but people like Oprah think he’s gonna drive us all to a greener tomorrow in the back seat of a Prius Hybrid. Eat me.

Why is it that suicide rates in the Army are at the highest rate in 26 years? Why are America’s best & brightest & bravest taking their own lives in combat zones and back at home after returning from these combat zones, and why is PTSD swept under the rug like some dirty little secret? A country that forgets its veterans will itself be forgotten.

Why are all the touchy-feely types claiming that America’s government separated a mother & child after the illegal alien mother was sent back to Mexico and left her American-born child here in the States? No one forced her to leave him behind. That was HER choice, amigos. She could just as easily have taken her kid back with her to Tijuana. This, after she holed up in a church for the past year claiming religious sanctuary. Elvira Arellano, 32, arrived in Washington state illegally in 1997. She was deported to Mexico shortly afterward, but returned and moved to Illinois in 2000, taking a job cleaning planes at O’Hare International Airport. She was arrested in 2002 at O’Hare and convicted of working under a false Social Security number. She was to surrender to authorities last August but instead sought refuge at the church on Aug. 15, 2006. So……WHY are background checks at one of America’s biggest & busiest airports so lax that an illegal immigrant had a job cleaning airplanes there?

And why, when I can’t seem to drum up more than a mere handful of people who actually read what I write, is Dog The Bounty Hunter on top of the New York Times best-seller list? I have nothing against Duane Chapman; he seems like a decent fellow. But #1, and I can't get more than 15 readers? That’s just wrong.
Posted by Steve: The Lightning Man at 8/21/2007 08:39:00 PM

Yes, we're sort of crazy out here in California, aren't we? The sort of issues we deal with are quickly becoming the issues all of America has to deal with.

And that suicide rate for soldiers is awful. We should all be ashamed.