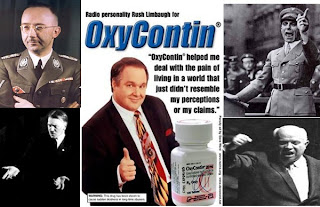 As I’ve said before, I’m convinced that no human being alive today is quite so enamored of the sound of his own voice than the self-proclaimed “America’s Anchorman”, Rush Hudson Limbaugh III. Not since the bombastic orations of Nikita Khrushchev and Adolf Hitler has so much politically-charged hot air been expelled upon the masses.

Don’t get me wrong; I’m sure as hell no Liberal, and I’m not a Democrat, either. I tend to lean conservatively in my views. But Rush is so far to the right that he borders on fanaticism. Shoe-banging, gesticulating fanaticism…

I listen to his show on occasion, and while I agree with many of the things he says, a lot of his rhetoric is 100% pure anti-Democrat propaganda, as if the Republicans can do no wrong whatsoever. During the Clinton years, he’d open his show with “Under Siege: America Held Hostage Day XXX “, and referred to House Speaker Newt Gingrich (R-GA) exaltedly as “Mister Gingrich”, like he was royalty for being a Republican. Current Speaker Nancy Pelosi (D-CA) is just called, you guessed it, Nancy Pelosi,or just Pelosi, with no honorific. Hey, didn’t ol’ Newton Leroy Gingrich have an ethics censure, and wasn’t he involved in numerous adulterous affairs on his 3 ex-wives? Then again, Rush had a very public drug problem… But don’t act like Republicans are above moral and ethical reproach, pal.

As far as he’s concerned, all Dems are evil and all Republicans walk on water. Typical partisan-politics bullshit, which is why the Federal Government (I mean, Feral Gummint) can’t get a fucking thing accomplished, but that’s a blog for another day, yet to be written.

Each Friday he has what he calls, “Open Line Friday” which sounds like a great idea on paper. He pontificates about how Monday thru Thursday the show goes his way, with callers and discussions being solely on topics of his choosing, but on Fridays he “takes the huge risk” of letting us, the audience, the ignorant rubes, “control” the show by taking calls on whatever the listeners want to talk about.

His call screeners have tighter assholes than Himmler’s SS stormtroopers. All week long they spoon-feed him an adoring public who kiss his ass like it was the Pope’s ring and then make some pro-Republican propaganda statement, after which Rush patronizes them and then makes as if to ask the opinion of his producer/Goebbels figure, a Mr. Snerdly. While I’ve never heard this Snerdly fellow on the air, I imagine he’d sound like other noted sycophant sidekicks like Ed McMahon and Paul Schaeffer.

Rest assured, dear readers, that his phone Gestapo rigidly controls Open Line Friday. If I were to call (and by some miracle actually get through) and tell the call screener that I wanted to tell His Conservativeness about Dubya being the Second Coming of The Messiah and that Hillary & Obama are the spawn of Satan, I’d be patched through post-haste.

But if on Open Line Friday I called and said I wanted to discuss the lack of decent TV coverage for hockey, I’d spend the next 3 hours on hold and then get disconnected. Oops!

It’s Open Line Friday so long as you toe the party line. Otherwise, you languish and get dropped.