An hour of my life that I'll never get back... 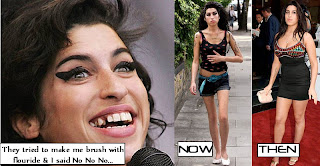 People often ask me why I listen to the music that I do. I don’t really listen to a lot of new bands, and by “new” I mean bands who have surfaced in say the past 5 years, such as Coldplay or Snow Patrol. I mostly listen to music from bands I’ve listened to for 20+ years who are still producing excellent music. Bands like Depeche Mode, Erasure, and The Cure. Trust me when I say when given the choice between listening to 99% of today’s Top-40 gobshite and say, the 1982 Depeche Mode song “The Sun & The Rainfall”, I’ll gladly take a trip 25 years down memory lane. The classic Smiths’ song “What Difference Does It Make?” still sounds better-crafted and more relevant than today’s pre-programmed, polished & shiny dreck, and it was released 23 years ago.

So, every so often, I donate an hour of my life to Purgatory and listen to Top-40 radio just to remind myself why I generally listen to talk radio instead. Some people waste life-span by smoking crack, some waste it in strip clubs… and me, I waste it listening to pointless crap in hopes of finding something that’s pretty good. Sometimes I even succeed.

So…here’s the results from another hour of my life that I’ll never get back.

1.Bubbly, by Colbie Caillat. This sounds to me like the perfect chick-song accompaniment to that overplayed “You Had a Bad Day” , by Daniel Powter, that was plastered all over American Idol’s loser send-offs. Sugary to the point of insulin shock. My teeth hurt when I hear her whisper-croon about crinkling her nose, etc.

2.Thnks fr th mmrs, by Fall Out Boy. We’re so cool that we can leave out the vowels in our song titles. Less emo than previous outings, and still by far less pretentious than those dickheads from Panic! At The Disco.

3.Bartender, by T-Pain. Sounds way too much like his other song, “Buy You a Drank”, with vocal processing stolen from Cher’s “Believe”. Sounds like he spends too much time in bars. How can you argue with brilliance in lyrics like “She made us drinks to drink, we drunk ‘em, got drunk.”? I mean, that’s fucking poetry, man.

4.Rehab, by Amy Winehouse. The Brits think this chick walks on water. Me, I think she merely floats because she doesn’t weigh enough to sink. I saw an old picture of her & she was well-fed & had a nice frame & face. Now she’s loaded down with very big tattoos, this giant beehive on her head, and she has that scrawny emaciated heroin-addict look . It’s like watching Mariah Carey morph into Nicole Ritchie overnight. How fitting that the song is about rehab. The jazzy 60’s Motown backing music is great, but American audiences aren’t used to hearing something without a hip-hop beat anymore, so the new radio-remix has some guy tossing a hastily-recorded rap over the top of the bridge that adds NOTHING to the song other than dumbing it down to pander to American ears. Click the picture above for a better view.....

5.Beautiful Girls, by Sean Kingston. This song is unescapable. It’s everywhere, from car radios to public toilets. The production, much like Winehouse’s song, is great, stealing its backing music from Ben E. King’s “Stand by Me”. Without the slick production, neither song would be worth a damn on their own. I find it hard to not laugh when he sings the line “It was back in ’99, watching movies all the time, when I went away for doing my first crime…” Hey, boyo, you’re barely 18. So, they sent you away at age 10? Fut the whuck?

6.Party Like a Rockstar, by Shop Boys. Aside from the annoyingly repetitive chorus, I really can’t understand 90% of anything these fucks are saying. Possibly the most repetitive thing I’ve heard since that Laffy Taffy crap from last summer. Totally, dude.

7.Potential Breakup Song, by Aly & AJ. More catchy than a case of crabs off a truck-stop toilet seat, this song has decently produced music mixed with some of the most bubblegum-simple lyrics since Avril Lavigne’s “Skater Boi”. They have nice voices, but something tells me their Hello Kitty shit wears thin by song 4 on a full cd.

8.When You’re Gone, by Avril Lavigne. Speaking of Avril, here she is with another ballad that sounds just like her other ballads. Oddly enough, her fast songs all sound about the same too. Instead of the faux cheerleader bop of “Girlfriend”, now it’s a somber and sad ballad from the all grown-up and newly-married Avril. Nice song, but ditch the raccoon eye makeup. It’s hard to take you seriously with that much eyeliner on.

9.4 In The Morning, by Gwen Stefani. I love her to death. She could use a couple pounds on her, but I still love her to death. I like her stuff more so without her No Doubt bandmates as of late. She’s got great pop sensibility and a great voice to boot. Not exactly manly-man music, but we’re all allowed an occasional guilty pleasure.

10.A Bay Bay, by Hurricane Chris. Okay, I take back what I said earlier; THIS is the most repetitive pile of goat shit I’ve heard since Laffy Taffy. By the end of the first 30 seconds I wanted to slit my elbows.

11. I Don’t Wanna Be In Love (Dance Floor Anthem), by Good Charlotte. These guys keep surprising me by re-inventing themselves each time they get played out. This is a great song. A good mix of rock swagger and synth riffs that gives me hope for Top 40 music to not suck so much. Poppy punk with a safe feel.

So, an hour of my life gone, and like I figured, most of it wasn’t worth the listening. I think I’ll go and listen to some Erasure or Depeche Mode now to soothe the pain in my soul. I urge you to do the same.
Posted by Steve: The Lightning Man at 8/19/2007 10:17:00 PM

LOL about T-Pain! He's just asking to be a has-been with his style and choice of topics. I think alot of these new "artists" aren't thinking about art, longevity or quality of music. They're thinking about money and fame. I don't think they could even begin to understand a group like Depeche Mode.