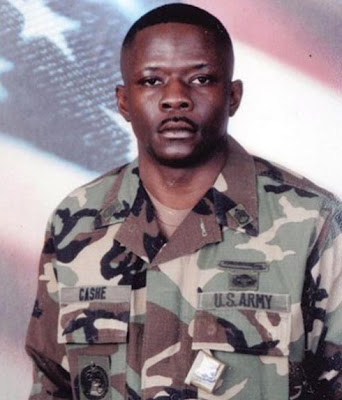 The story of Sergeant First Class Alwyn Cashe is a hero's tale, and a tale that is far from over despite his passing in 2005. There is an ongoing fight for Cashe to be awarded a posthumous Medal of Honor for his actions instead of the Silver Star that was presented to his family.

Alwyn Crendall Cashe was born July 13, 1970 in Oviedo, Florida. He joined the Army after graduating high school in 1988, and was a veteran of the First Gulf War in 1990/91. On his second tour of duty in Iraq, the Bradley vehicle he was in was hit by a roadside IED. Not initially hurt in the blast, he was however drenched in fuel, and that proved to be his undoing when he went back inside the ruined track to rescue his men. Burned badly, Cashe was transported to the burn center at Brooke Army Medical Center at Ft. Sam Houston in San Antonio, TX, where he succumbed to his wounds and died three weeks later.

As three Bradley fighting vehicles were rolling out the gate, Cashe’s broke down. Major Jimmy Hathaway, who as a Captain was the Company Commander, says  Cashe could have by all rights not gone on the mission due to that. Instead the sergeant went to another Bradley and told its gunner to take the bad one back to the base.

Trouble was about to erupt.

Half an hour after leaving the base, darkness and a sand storm obscured a  pressure-switch improvised explosive device in the Cashe Bradley’s path. The  ensuing blast resulted in fuel spewing everywhere as the vehicle erupted in  flames. Then the group came under fire from terrorists.

Cashe, injured and drenched in fuel, pulled himself out of the gunner’s hatch  and crawled down the Bradley to help the burned driver escape.

Still, the armored personnel carrier/tank killer was burning with six  soldiers and a translator inside.

With no concern about his own safety, Cashe rushed to the back of the vehicle  and tried to open the troop hatch door. He couldn’t, and it got worse; his  gas-soaked uniform went up in flames.

Inside the Bradley, Staff Sgt. Douglas Dodge popped the troop hatch door open  and stumbled outside, burned and dazed from a concussion. There he saw Cashe,  his uniform gone, his skin burned everywhere except where his helmet, body armor  and boots were.

“Cashe said, ‘Where are the rest of the boys? We’ve got to get them out.’  Without even thinking, Cashe just went in there,” said Dodge, who followed  him.

Despite the horror scene, Cashe kept going, retrieving one injured and burned  soldier after another with Dodge’s help.

While the door had been opened by Dodge, the soldiers inside were too  battered to realize that. Cashe and Dodge battled flames and smoke and got all  six soldiers and the interpreter out. By the time a crew from a trailing Bradley  arrived to assist, Cashe had suffered burns over most of his body.

The Cashe-Dodge action helped save those six soldiers, three of whom would  die from complications resulting from their burns in the next few weeks. One  more died later indirectly from his injuries.

So did Cashe, in November 2005. He left behind a wife and three children ranging in ages from 6 to 12.

The three men who perished from their burns at Brooke were Staff Sergeant George Alexander Jr., 34, of Killeen Texas; Sergeant Michael Robertson, 28, of Houston; and Specialist Darren Howe, 21, of Beatrice, Nebraska.

To read the narrative of the Silver Star awarded to Cashe posthumously, it reads like the citation that accompanies a Medal of Honor. 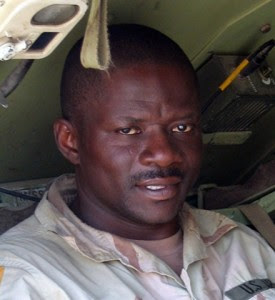 
On 17 October 2005 , SFC Alwyn Cashe's heroic actions saved the lives of six of his fellow soldiers. At approximately 1915 hrs, his platoon departed the forward operating base along Route Jaime to conduct a route clearance operation along a supply route that ran through the town of Duliaya; a town adjacent to the FOB.


After traveling about 4-5 kilometers, the lead Bradley fighting vehicle, of which SFC Cashe was in the gunner's hatch, struck a vehicle detonated IED emplaced across the route at grid MC 25377243. The blast ignited the fuel cell causing fuel to spew throughout the vehicle, igniting a fire and causing the vehicle to roll to a stop. Also, from the forward left flank of the blast site, the platoon received enemy small-arms fire.

Soaked with fuel himself, SFC Cashe managed to dismount from the vehicle and assist the driver, SPC Howe, whose uniform was on fire. SFC Cashe extinguished the flames on SPC Howe.


Six soldiers and an interpreter were in the troop compartment of the burning vehicle. Flames had engulfed the vehicle and were darting from the weapons ports. One of the soldiers in the back of the vehicle attempted to open the hatch door in an attempt to help the soldiers escape. The flames intensified and everyone inside was aflame. Without regard for his personal safety, SFC Cashe rushed to the back of the vehicle, managed to help open the door and began to pull the soldiers out, one at a time. In doing this, the flames totally gripped his fueled soaked uniform causing severe, painful burns. Despite this pain, he bravely continued to pull his troops out of the vehicle and feverishly worked to put their flames out. As the chaos continued, SFC Cashe noticed that the platoon medic was still inside. He rushed back to the vehicle, reached through the flames and pulled out the medic. All this despite being on fire himself.
Within moments, a trail vehicle arrived and assisted with the CASEVAC. Although severely burned, SFC Cashe bravely continued to take control of the situation as best he could. Shortly thereafter, the company first sergeant, 1SG Chris Mackenzie, accompanied by medics and other soldiers from the company arrived and began to evacuate the severely burned soldiers, the worst of which was SFC Cashe. The FOB helipad served as the LZ/PZ for the air evacuation. Badly burned, all six soldiers were alive when they were air evacuated. The interpreter did not survive the blast and was immediately transported to the battalion morgue.
Throughout the nightmarish ordeal, ten soldiers were injured. Six of the ten were treated at the Balad Hospital. Five of those six, including SFC Cashe were later evacuated through Landstuhl to the burn center in San Antonio, Texas. Sadly, over the next few weeks, four of the six died of wounds.


Despite being the most severely injured with 2nd and 3rd degree burns over 72% of his body, SFC Alwyn Cashe endured while his soldiers were alive. He suffered through painful surgeries, infections, organ failure and loss of body parts as he continued to be the consummate Platoon Sergeant to his soldiers. SFC Alwyn Cashe died of his wounds on 8 November 2005. He was the last of those so severely injured that terrible night to die.


SFC Cashe's selfless and gallant actions allowed the loved ones of these brave soldiers to spend precious time by their sides before each succumbed to their dreadful injuries.


Although he is no longer with us, SFC Alwyn C. Cashe is the type of hero that historians will write about.


His actions are in keeping with the finest traditions of military heroism and reflect greatly upon himself and the US Army.


Al Cashe was initially put in for the Silver Star after the action, and the award came through three days after he passed, but at the time of the award, those higher up the chain were unaware that the incident occured while under direct small arms fire from the enemy as well, which is why it was a Silver Star that was awarded.  Several generals and an Army historian are spearheading a continuing effort to get the award upgraded to the Medal of Honor. Stay tuned for updates. 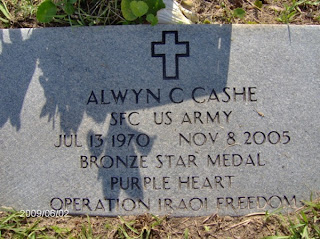 Wow he joined the same time we did. Joel

we have spoke about this topic before and you know i am against awards being up graded by POLITICIANS, but in this instances as the military is pushing it forward i am in favor. this was without a doubt conspicuous gallantry, at risk of life, beyond the call of duty.