The coolest tattoo in the first grade! 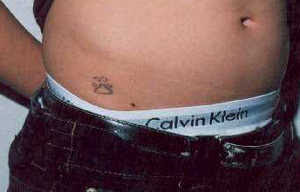 
Just when I think I’ve seen everything, some new & improved imbecile comes to light.

At last report police in the Fresno, California area were looking for a man accused of holding down his 7-year-old son while another man tattooed the child's belly with a gang sign.

Police say the father, 26-year-old Enrique Gonzalez, faces six charges including mayhem, child abuse, false imprisonment, battery, participating in a criminal street gang and committing a crime for the benefit of a gang. That’s in addition to just plain being a complete & utter dick.

Police did arrest a man they say was the tattoo artist. Travis Gorman, 20, of Fresno, faces similar charges. I balk at saying “tattoo artist” because no self-respecting legal tattoo artist that I know would do such a thing. This guy gives tattooists a bad name. 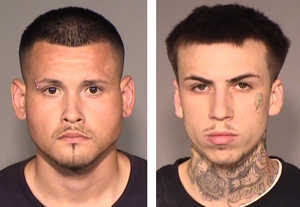 Enrique Gonzales and Travis Gorman, who conveniently had mug shots before this latest episode.


The dog paw insignia tattooed on the boy represents the Bulldogs, Fresno's largest street gang. The gang seems pretty popular with young Latin kids; go do a Google image search and see all the shit that pops up. The gang took its name from the mascot of Fresno State University. It’s as close to college as these little hood-rats will ever be unless they take some classes in between shower-rapes at Lompoc Prison. 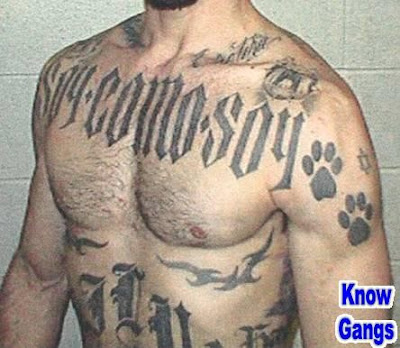 Bulldog paw tats on a Fresno gang member. If it were orange I'd say he was a Clemson fan.

Detective Jesse Ruelas with the Fresno County's multiagency gang task force said he has seen 14-year-olds with gang tattoos, "but never this young." And it is illegal in California for a child younger than 18 to get a tattoo, said David Luchini of the Fresno County Department of Public Health.

The boy's parents are separated, and the boy was staying with his father during the Easter break, said police spokesman Jeff Cardinale.

Ruelas, who said the boy is "traumatized," gave the following account:

The boy and Gonzalez were at Gorman's house, where Gonzalez was getting a tattoo. Gonzalez asked his son whether he wanted to get a tattoo. The boy said "no," but his father held him down around his rib cage and waist while Gorman inked on the tattoo.

The boy's mother, who has not been identified, reported the incident to police the following Monday.

Cardinale said the mother noticed her son was upset when he returned to her home after Easter break. "When Mom drew him a bath, he tried to hide that part of his body," Cardinale said.

The boy also asked to be left alone while bathing and later while dressing, which his mother said is unusual. The mother walked in on him while he was dressing and saw the tattoo. The boy started crying, Cardinale said, and told his mother, "My dad made me get it. He forced me down and tattooed this on me."
Gorman, who also was arrested on a parole violation, is not a licensed tattoo artist, but does tattoos for Bulldog gang members, Ruelas said.

Again, I reiterate, this gives tattoos and tattoo artists a bad name. I’m a tattoo advocate and fan of getting inked, in moderation. I have six tattoos and am getting a seventh in two weeks. This new one will be my first that will be visible in a short-sleeved shirt. The rest are on my upper arms. You want tattoo advice? E-mail me.

Getting a tat is a serious and sometimes life-changing decision, not to be entered into lightly. I’m okay with younger people doing it, and I’m okay with dropping the minimum age to 18, with the caveat that kids really think hard about the design and the fact that it’s permanent. I got my first one at age 36; it took me awhile to find a design I could live with.

However, this little boy in Fresno wasn’t given a choice, and now carries a reminder around of how incredibly shitty his father is. He’s either stuck with it, or he can get it covered with another tat later on, or undergo painful laser removal procedures. Of course, with a crap-quality back-room ink job (or what I call a Ghetto-Assed Prison Tat), it’s likely of inferior quality so that the use of Wrecking Balm might break it up and fade it out.

When Enrique gets to prison, maybe some rival gang will hold him down and forcibly do things to him… 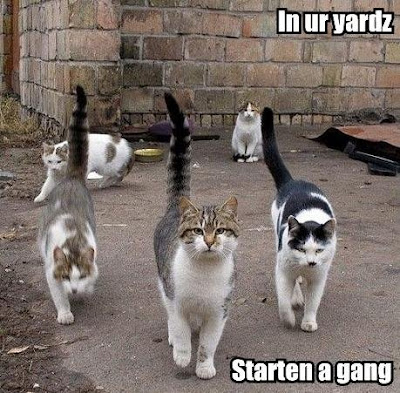