I feel a tad insulted today.

In what could be the best slice of irony that I’ve seen in a long time, Wednesday night’s American Idol episode featured a performance by judge/punching bag/Vicodin-munching rambler Paula Abdul, debuting her new single “I’m Just Here For The Music”.

For a show that’s ostensibly all about singing and vocal performance, isn’t it a slap in the face of every contestant and an insult to our intelligence for Paula to have the audacity to lip-sync her performance? It was painfully obvious that she was phoning it in, despite the lightning-fast camera-angle changes every 3 seconds.

Then again, there are currently thousands of people paying hundreds of dollars to watch Britney Spears basically grind up on a stripper pole miming a medley of her songs so the American public is just stupid enough to accept this chicanery.

Later in the same episode, Gwen Stefani sang live with her band No Doubt, and you knew it was live. Later still, Idol alumnus Chris Daughtry and his band debuted their new single, and they were also live.

It was a little over a year ago that Abdul last attempted to be relevant to pop music again with “Dance Like There’s No Tomorrow”, lip-syncing it on the Super Bowl while fellow Idol judge Randy Jackson mimed playing the bass like it was 1986 and he was still in Journey, minus the giant 80’s mullet-perm flat top.

At least Paula was sober during the show; a few of this year’s episodes made me wonder. She went off on these rambling semi-coherent rants, all glassy-eyed like she’d been chewing Vicodins like TicTacs. 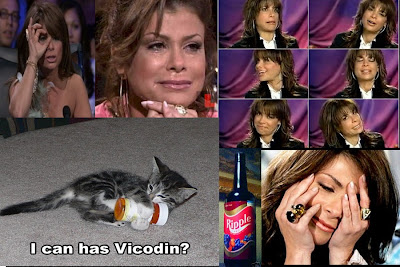 Last night also saw a grave mistake by America by voting off Allison Iraheta, the high-schooler with the giant voice and even bigger potential and star appeal. I hope she fares better than another Idol contestant with similar cherry Kool-Aid colored hair. Nikki McKibbin was the hottest little sexy thing this side of buttered toast, and last year she was on Celebrity Rehab with Drew Pinsky. She was third overall on season one; Iraheta finishes fourth this year.

America instead has all guys as a final three.

By all rights, after butchering Aerosmith’s “Dream On”, Danny Gokey should have been sent packing. I like Danny and was sucked in by his heart-wrenching story of competing shortly after the death of his wife, but while I initially loved his voice I’m now finding that all his performances sound the same: pretty one-dimensional and limited by his gravelly voice. He can always sing jingles for Lens Crafters if he doesn’t win. I shit you not, there’s a website where you can buy Gokey’s myriad assortment of eyeglass frames, as well as other Gokey-related trinkets, with 10% of the sales going to the Sophia’s Heart Foundation, named after Gokey’s deceased wife. The site claims no affiliation to Gokey or the foundation. www.dannygokeygear.com 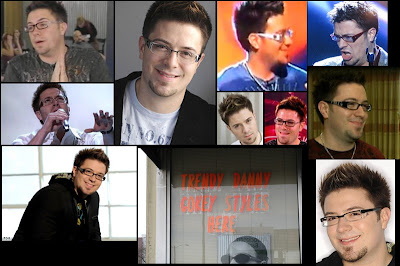 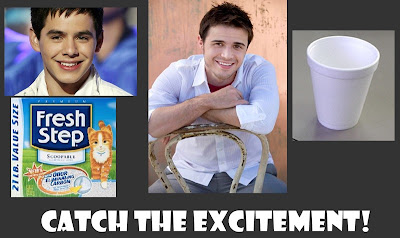 And then there’s the judge’s little darling, Adam Lambert. He’s pretty to the point of being effeminate, and while he’s super-talented, that caterwauling falsetto wail of his is like nails on my mental chalkboard. An unstoppable juggernaut, he’ll soon be overplayed on every Top-40 station in America. Get your eyeliner ready.

In my humble, yet correct, opinion, Idol jumps the shark every year and then reinvents itself. They caught shit for all the bashing they did to people in the audition shows, so they cut back on the bad auditions and tantrums, which was honestly the best part of the season really. They kept bringing on these musical guest judges and mentors who were completely and utterly irrelevant to today’s pop music, like Tony Bennett and Barry Manilow; great artists in their day but so far removed from the pop landscape that they stand out like whores in church…whores with extensive facelifts and fake tans.

This year they’ve been a bit better about their “mentors”, even bringing in guitar guru Slash this past week, and they’ve made attempts to boost ratings by bringing in various contemporary music artists to perform current singles during the shows. They’d never allow an aspiring rapper to be a finalist on Idol, yet they brought in Kanye West, and it was amusing that they let Jamie Foxx sing “Blame It On The Alcohol” to all the little kids watching. And of course they have to bring out any and all Idol alums who are releasing albums during the season, like Kelly Clarkson and the aforementioned Daughtry, and they brought in Carrie Underwood to spice up Country Night since mentor Randy Travis had the charisma of a lump of coal that week.

Honestly, I’ve been so bored this season that Paula’s drunken ramblings and her lipping of her new and instantly forgotten single were the true highlights. I wonder how much more exciting it would have been had they included Crying Emo Sissy Nathanial Marshall, Melodramatic Crying Nonstop Talker Tatiana Del Toro, and Wannabe Comedian Who Refused To Take This Shit Seriously And Blew It Nick “Norman Gentle” Mitchell? 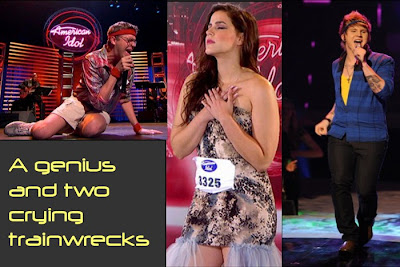