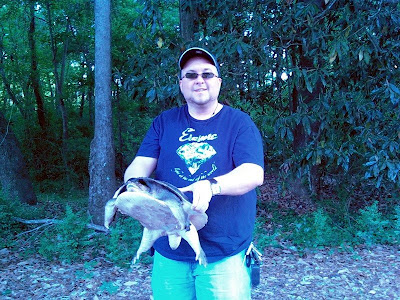 On today’s episode of Animal Cops Walterboro, instead of rescuing a wee orange kitty like we did last time (see my October 2007 archives), we get a little less domesticated and a little more wild in our speed bump rescue efforts.

The last thing I expected to see in the middle of a busy Highway 17-A on a Friday night was a large black lump that started walking. Granted, he wasn’t walking very fast, because the speed bump in question was a pretty good-sized snapping turtle.

The u-turn this time was at least legal, but no less speedy since at 7PM on a Friday night, 17-A is pretty busy and how this dude managed to get to the very middle of the road was a testament to this little fella’s fortitude and luck.

I scooped him up and got him to the side of the road, where two other cars had also stopped to see if he’d make it. I snap-decided to run him to a more turtle-friendly environment, and so into the empty trunk of the car he went. He had air, and since the trip was only three miles in duration, he was only going to be in the dark for a few minutes. 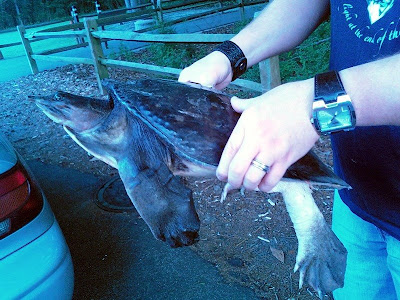 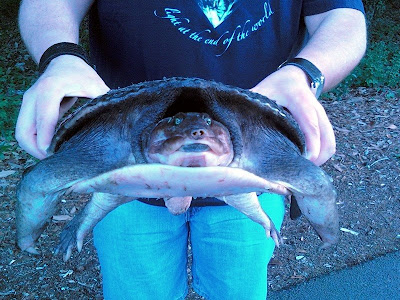 He was heavier than I expected him to be, about 15-20 pounds, and holding him out in front of me so that if he peed it wouldn’t get on my t-shirt made for a very long hundred-yard walk from the parking area to where we released him. He lay there in the grass, very still, for a few minutes until we walked away, and just as we were almost beyond visual range I saw him walk towards the water and safety.

Cletus the Turtle is now residing in the main swamp pond of the Great Swamp Sanctuary in Walterboro. 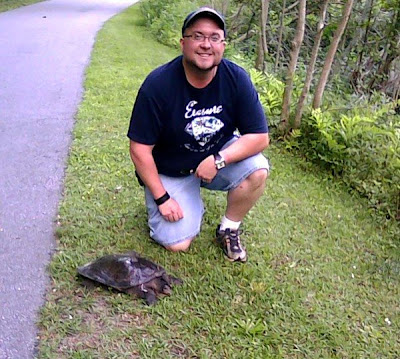 what exactly are you doing in pic #3, and why do you look so happy in pic #4? i stop for turtles also. funny how we're still so alike. except for pic #3 that is.

No, dude, I remember you stopping for wild turkeys and getting chased around the car by one!

In pic three I was just holding it out for a face shot pic; I'm not buggering it! And I'm smiling as I let it free because I'd done a good deed.....

I wonder, can you get Turtle Flu?

that's exactly what j woman said, but if you remember, i thought it was a pea cock. good deeds or not it still looks lascivious.