The First Annual State of the Blog Address 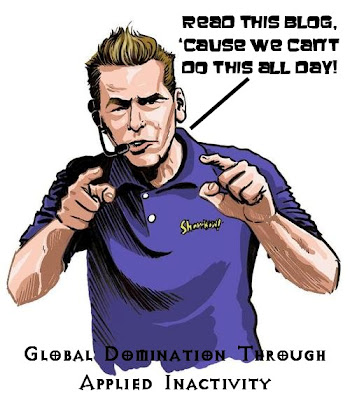 Well, this should be fun. I get to toot my own horn a bit I guess and let everyone know what’s been going on with this blog.

Why do I even do this? Why do I write?

Because I’m an opinionated loudmouth, I suppose. I see and hear things all day that I just have to vent about. It’s way cheaper than therapy. I love to write; always have ever since I was a kid. I'm too lazy to be a standup comic. It exercises my mind a little and I really do hope that the people who stop by my little corner of the Interwebz decide to come back and visit again, having left a little more informed, or at least amused and entertained.

And speaking of my readers, I really do want to thank all of you who come here to see what shenanigans my deviant little mind comes up with next. I’m exceptionally grateful to my subscribers both on Blogspot and on MySpace. A special shout-out goes to Randy Barnett, who was one of my first regular readers/commenters from outside my usual suspects and continues to read me regularly.

I used to wonder if anyone outside my immediate circle of friends and family ever read my labors of love, and then I installed a feed widget (Feedjit, actually) that has been a total godsend. And then I installed a counter, too. Turns out that I get between 500 and a thousand hits a week! I’d say better than 2/3 of my traffic is from people coming to look at the insane pictures I create and/or caption to go along with my blogs. Every day I’m fascinated by the various locales that my site has been visited from.

To date, I’ve been visited from every state (except I think New Hampshire, dunno why) and every part of Canada except Newfoundland/Labrador and the Yukon Territory. A very heartfelt thank you to the visitor from Kuglugtuk, a town of 1,300 on the Arctic Ocean in the province of Nunavut. It was very cool to see a visit from there.

I always smile when I get a visit from a Muslim country, since many of my posts are critical of radical Islam, and I’m surprised when I get a hit from a country known for oppression, like Vietnam, China, Venezuela, and Iran. I hope you enjoy the freedom of speech that I employ. I’ve managed to get most of the former Yugoslavia to visit, too. They might not agree on a common religion or borders, but Serbia, Slovenia, Croatia, Bosnia, and Macedonia all agree that “GDTAI” is the most happening spot on the web. We just need to convince Kosovo and Montenegro next. And it was really neat to get a hit from Reunion Island, a small nation and French territory off the eastern coast of Africa, past Madagascar and Mauritius in the Indian Ocean.

Recently, I had a couple posts picked up by Topix and Buzztracker, a couple of websites that act as aggregators for global news, and I was surprised to find myself listed on the Technorati website too. And back at the beginning of the year I wrote a roundup of the best music I’d found in 2008, and as my song of the year I picked “Nostalgia”, by Mirror. Can you imagine my shock at finding that the man behind the music, Thomas Anselmi, had read my blog post and had even mentioned it along with a link on the band’s website? That was very validating and really made my day.

I recently started partnering with some of my old Army buddies who blog occasionally but don’t have their own sites. It’s a bit different to be acting as editor as well as a writer, but having additional material on the site only makes it stronger. Plus, it’s great to collaborate with guys I’ve known for 20 years, and it gives me a chance to play with even more of my insane pictures.

My blog was never intended to become quite as political as it has. Actually, it was just supposed to be looks at everyday life and the things that made my head explode. However, with the country the way it is, I find myself writing more about the absurdity of Washington. Bear with me; I have every intention of continuing my non-political works! I’ll soon be writing about music, TV, and books again, I promise.

A big shout-out too goes to Crys, who patiently gives me time to write, even when she'd rather have me over on the love seat watching TV with her.

Thanks for reading. I’d probably still write even if no one read it, but knowing that you’re all out there makes it all worthwhile. Global Domination Through Applied Inactivity: taking the world by storm, eventually, when we get around to it. 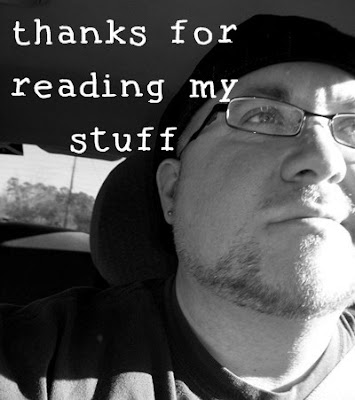 The author deep in thought in Charleston traffic, thinking up another blog post.
Posted by Steve: The Lightning Man at 4/05/2009 08:40:00 PM

It's a pleasure to read your stuff.

Nice of you to give the Shamwow guy a job. I hear he's going to be needing work. Heh.