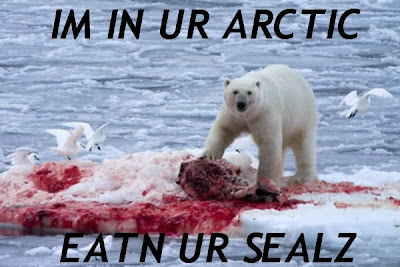 Why are people so damned stupid?

There’s a reason why animals in zoos are kept in special enclosures. That’s because many of Mother Nature’s wild animals are born with the innate instinct to kill things placed in front of them. Whether it kills to eat or to defend their territory or to establish dominance, not everything in the zoo is all warm & fuzzy. This is also why non-domesticated animals, by which I refer to anything that isn’t a doggie, kitty, goldfish, or parakeet, make piss-poor pets.

Hanging out with tigers and chimps and bears often gets pet owners killed. Jumping into an enclosure in a zoo with angry baboons or Komodo Dragons or what have you often gets you killed. Swimming with seals off the California coast wearing a wetsuit & flippers makes you look like a seal and often gets you a face to face with a Great White. 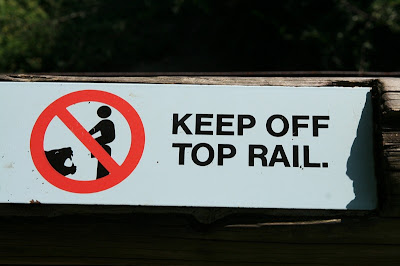 Y'know, these warnings are there for a reason...

And yet, you idiots persist in doing it, and then when the little beasties gnaw your limbs off you say it’s not the animal’s fault….

Well, you’re right; it’s not the fault of the animal because the animal is doing what animals do. It’s YOUR fault, you silly simple shits, for not respecting the fact that while it may look cute, it will KILL YOU.

To whit, I bring you the priceless picture of some asstard in Germany who jumped a fence, a line of prickly hedges, and a wall in order to swim towards the pretty polar bears in the Berlin Zoo this weekend. 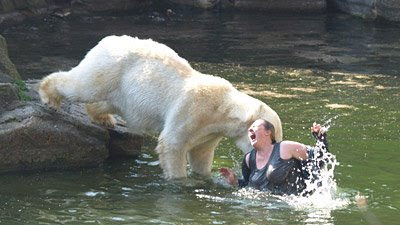 Email ThisBlogThis!Share to TwitterShare to FacebookShare to Pinterest
Labels: mauled by polar bear

i think she is just confused.... she thought he was the head judge at the wet t-shirt contest, and approached him trying to influence his vote.