Have they issued a Fatwa against me yet? 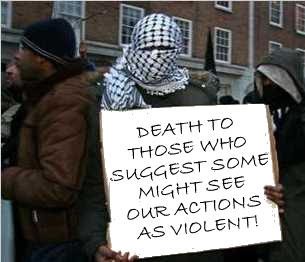 No sooner do I point out how Afghanistan is one of the most ass-backwards places on Earth than they go and verily prove my case for me yet again. I mean, how bad of a shit-hole do you have to be living in to try to escape into Iran?

Officials said yesterday that Taliban gunmen used a firing squad to kill a young couple in a lawless, militant-controlled section of southern Afghanistan for trying to elope, shooting them with rifles in front of a crowd, for trying to elope. I'm serious.

The woman, 19, and the man, 21, were accused by the militants of immoral acts, and a council of conservative clerics decided that the two should be killed. Oh, yes, the Religion of Peace strikes again.

The two had fled their homes and hoped to travel to Iran, that bastion of freedom, but their parents sent other villagers to bring them home. Details were sketchy, but reports say that once back home, the pair was either turned over to the Taliban by their parents or the militants came and took them by force. Either way, they were soon shot by some dudes with AK’s. 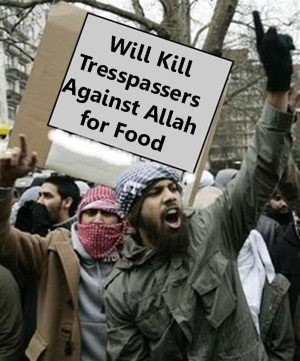 The Afghan government has no access to the remote region where the two were shot, said Jabar Pardeli, the provincial police chief of Nimroz Province. Yeah, Nimroz; I’m not making this up. The province has a police chief though, so supposedly some sort of government trickles down that way.

Not to be outdone, though, Saudi Arabia takes absurdity to an even sicker level.

On Saturday, for the second time since December, a court in the Saudi town of Unaiza upheld the marriage of an 8-year old Saudi girl to a much older man, on the condition that he does not have sex with her until she reaches puberty.

Please, chew that morsel a minute before you choke on it. It leaves a rather foul aftertaste, no?

You see, financial problems prompt some Saudi families to marry off their underage daughters to much older men, a practice the kingdom's chief cleric Grand Mufti Sheikh Abdelaziz Al al-Sheikh endorses. Media reports claim that the 8 year-old girl's father arranged the marriage in exchange to clear his debts with the man. 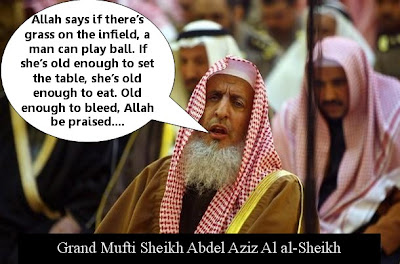 But the dude promised to not have sex with her till she hits puberty. Yeah, sure. This after Afghan clerics said it’s okay to demand sex every 4 days, according to the Koran. So, my question to ya’ll is this: do you really think this pedophile asstard is gonna wait a few years to take what Allah says is his? If she says no, he can have her beaten or killed or both. Hell, he might just do it because she’s not progressing to puberty fast enough. No, way…that poor girl is doomed, and we can thank not only her asshole father but the shitbag clerics who twist around the already-twisted teachings in the Koran.

Maybe the White House will issue a terse statement? Maybe there will be a stern warning from Number 10 Downing Street? Maybe the U.N. will huff and puff and threaten a sanction or two? Or maybe, as usual, no one will do jack diddly shit in the name of appeasement and keeping that oil flowing.
Posted by Steve: The Lightning Man at 4/15/2009 10:44:00 PM