Crime is Down, except in my town... 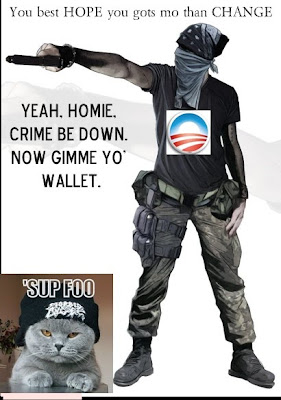 I came across a rather interesting article on FOX yesterday. Conservative Scalawag beat me to the punch on mentioning it, though. Kudos, sir.

WASHINGTON — Unemployment is high, the economy is down. Yet for all the signs of recession, something is missing: More crime.

Experts are scratching their heads over why crime has ebbed during this recession, making it different from other economic downturns of the past half-century. Early guesses include jobless folks at home keeping closer watch for thieves, or extra benefits keeping people from resorting to crime.

Preliminary figures gathered by the FBI for the first six months of 2009 show crime falling across the country — at a time when many experts and police officials had expected crime to rise under the pressure of high unemployment, foreclosures and layoffs.

Murder and manslaughter dropped a surprising 10 percent for the first half of the year, according to the FBI's data.

"That's a remarkable decline, given the economic conditions," said Richard Rosenfeld, a sociologist at the University of Missouri-St. Louis who has studied crime trends.

Rosenfeld said he did not expect the 10 percent drop in killings to be sustained over the entire year, as more data is reported. But he said the broad declines are exceptional, given that past recessions have boosted crime rates dating back to the 1950's.

The professor said there are several possible explanations, including that extended unemployment benefits and other government attempts at economic stimulus "have cushioned and delayed for many people the big blows that come from a recession."
Those benefits will have to run out eventually, he cautioned.

Another possible factor is that with more people home from work, it is harder for burglars to break into a home or apartment unnoticed by neighbors, he said.

Rosenfeld said another possibility is that because big cities tend to have an outsize impact on crime statistics, those cities' so-called "smart policing" efforts are still working to drive down rates.

"What you see are the large cities, Chicago, Los Angeles, New York in particular are down considerably, and those large cities are driving the overall change," he said.

Overall, violent crimes fell by 4.4 percent and property crimes dropped by 6.1 percent, according to the data collected by the FBI. Crime rates haven't been this low since the 1960's, and are nowhere near the peak reached in the early 1990's.

The new figures show car thefts also dropped significantly, falling nearly 19 percent and continuing a sharp downward trend in that category. Some believe that big drop in car theft is due largely to the security locking systems installed on most models, as well as more high-tech deterrents like global positioning systems.

The early 2009 data suggests the crime-dropping trend of 2008 is not just continuing but accelerating. In 2008, the same data showed a nearly 4 percent drop in murder and manslaughter, and an overall drop in violent crime of 1.9 percent from 2007 to 2008.

According to the FBI figures, reports of violent crime fell about 7 percent in cities with 1 million or more people. But in towns with 10,000 to 25,000 people, violent crime ticked up slightly by 1.7 percent.

Each city's data was different, but collectively pointed to less crime in every major category.

Nationwide, rape fell by 3.3 percent and robbery by 6.5 percent. Arsons, which are subject to a variety of reporting standards, declined more than 8 percent.

Separate statistics compiled by the Justice Department measure both reported and unreported crimes.

Okay…what about the fact that once that imbecile and his cronies took over in Washington, gun sales went through the roof? Maybe crime is down because more people are armed & prepared for self-defense?

Maybe the chronic shortage of ammunition I keep hearing about has meant that the bad guys can’t get ammo for their cheap, poorly-maintained guns that they rob and murder their local citizenry with? Nahhhh, shortages only ever effect the law-abiding citizens. Criminals always find ways to get guns and ammo. Gun control laws only keep law-abiding citizens unarmed & defenseless while criminals just get better armed.

Wouldn’t you think that with Global Warming keeping it so damned hot, and with Al Gore claiming that the earth is a few million degrees just under our feet, that crime would be astronomical due to heat-related insanity?

Then again, you have cops bringing handguns to snowball fights…

But it’s not down everywhere, obviously…like in my backyard.

Unemployment in South Carolina is up…like 12.3% now. Gun crime in my town is UP. WAY UP. I live in a town of 6500 people 40 miles from Charleston. We’re the county seat for a very rural county of about 39,000. In the past year or so we had a deputy sheriff shot & killed, my wife & I were caught in a shooting at a gas station that ended with 11 arrests, one wounded (and armed) juvenile, and yours truly with a 9mm hole in his quarter-panel 8 inches from my kneecap. Being a law-abiding gun owner (and slacker who hasn’t gotten his concealed carry permit), my .45 was at home. 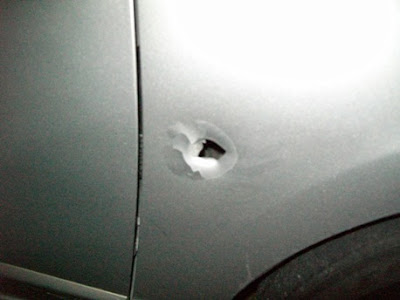 We’ve had a lady murdered in her driveway. We have had no fewer than 10 shootings, in town and just outside the limits, in the past 8 weeks alone. One of those was a drive by that killed three, including a 20-month-old baby, and sent several others to the hospital. Three assclowns recently broke into an elderly woman’s home and after she fired at the intruders, they maced her & shot her, kidnapped her, stole her car, and left her in the trunk of her car a few miles from my door. She’s recovering and should be just fine. 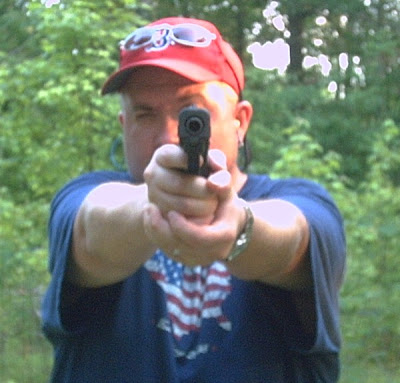 Beware of Owner: Gun Control means being able to hit your target.

The shitty economy means that I haven’t got the extra money to put towards getting my wife a weapon and getting us both our carry permits. It’ll be $300 to get our permits and then maybe another three or four hundred to get her something she likes and is comfortable with.

Maybe Obama will give me a Homeland Security bailout grant to arm my family? Yeah, right… 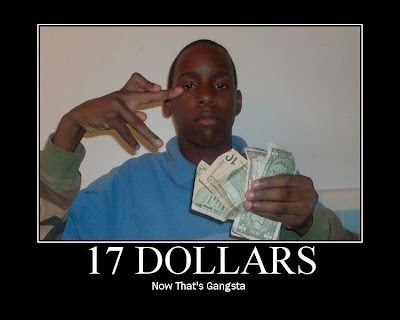 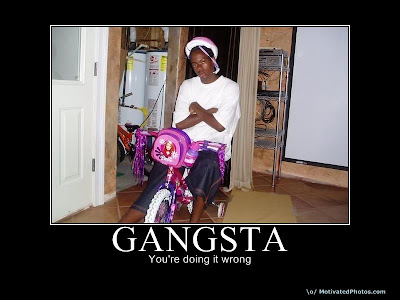 Due to economic hardship, it's harder to mack in a pimp ride. However, it's also easier to look like a Tru Playa with a smaller bank roll...

burglary is up everywhere. those stats are old. isn't it strange how the government says everything is all pussy and pancakes, and bullets and their launchers are some of the few durable goods that are in short supply? guess even us joe six packs can see through those lies.