Man, oh,man....I'm sure glad Barry Obama came home from his big Asia trip in time to pardon those two turkeys at the White House. I mean, we wouldn't be able to properly function without that important ritual to guide our nation in these turbulent times.


We needed the Dear Leader's guidance while riots were breaking out over cheap TV's and DVD's. People were camped out in tents as early as Wednesday afternoon....one family in New York hit the sales just to stay warm because 3 weeks after Sandy hit, THEY STILL HAVE NO HEAT OR POWER. I thought you waved your hand and your kind benevolent smile saved the people who were displaced, according to Chris Christie as he fawned over you when he wasn't wilting like a teen girl over Bruce Springsteen and stabbing Mitt Romney in the back.

Our Beloved Dear Leader (Blessed Be His Name) spent the early part of the week on another expensive trip overseas, because it was important to go wave the flag in places like Burma, Cambodia, and Thailand. Hmmm....Hamas is dropping rockets on Israel and dragging the corpses of murdered people merely suspected of sympathizing with the Israelis behind their mopeds, our own economy is 30 days from COLLAPSING and burning in flames, a major American company just folded and let go over 18,000 employees at the holidays due to union thuggery, and where is the newly re-elected UberMan? Bullshitting his way across Asia.

He's the first President to ever visit Myanmar!!!! (Oh, wait....they call it Myanmar, and Barry calls it Myanmar, but the official government stance is to still call it Burma. Barry does it His way.) Whoopty do. A place under military junta rule for decades with a miserable human rights record, recently trying to Do The Right Thing, which I do applaud but seriously, was now the right time for a visit? There are more pressing issues at hand, Barry O. Did you bring back some Wagyu Crab Rangoons from Rangoon for Big Momma?

He visited Cambodia, a place we've basically neglected since we pulled up our tent stakes at the end of the Vietnam War and went home, leaving murderous thugs behind to slaughter most of the civilian population. The Cambodian First Lady gave Barry the same type of bow reserved for servants.

He visited Thailand, a long time ally in the region, known worldwide for lush jungles, a massive industry of perverse sex tourism, being a safe haven for fugitive pedophiles, and for being the setting for The Hangover 2.

But never fear.....Barry dispatched Saint Hillary to the Gaza Strip to quell the violence. Almost before her feet alighted on the ground, the Lamestream Media made reports that a ceasefire had been reached. Saint Hillary had saved the day! Give her a Nobel Peace Prize for stopping all the violence in the Middle East in time for the Blessed Yule Celebrations! Bring her Gold, Frankincense, and Myrrh!!!

Seriously? They stopped fighting because a lame-duck woman, who is leaving her job in a month or two, representing a nation that one side hates and the other side no longer trusts because Obama keeps crapping on them, flies in and waves her magic wand?

Of course, while the newsies were touting the ceasefire, rockets were still headed to Israel from Gaza and small arms fire was popping like popcorn....."Celebratory Gunfire", the dicks at CNN called it. I guess that could be plausible, since the Muslim world just loves to celebrate and waste perfectly good ammo by firing indiscriminately into the air with no concern over where it lands or who it lands on...they even let the kids join in because you can never start hating Israelis too soon. 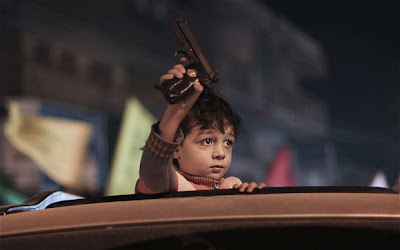 My guess is they knew Israel wasn't bluffing when they called up over 75,000 reservists and were fully prepared to roll into Gaza and raze it to the ground to dispatch the vermin within, and Morsi was distracted by uprisings against him at home in Egypt so he pulled back his visit to Gaza. All of this, of course, serves as a distraction while Iran, who backs Hamas, shores up their own defenses and continues working on nukes to launch at Israel and the USA. They probably told Hamas to start something just to test Israel's response time.

But....never fear, Barry O will scowl at them and say "Let Me Be Clear", tell them they acted stupidly,  and then do nothing.


Notice that Barry didn't offer to bail out Big Snacks and save 18,500 jobs? Nope. Moochelle said "Snacks be the Devil!!!" and Hostess was defying Union Thugs, so they had to die. The 5,000+ union jobs lost are just collateral damage. Never fear, some Mexican company like Bimbo will buy it all up and the unions will skulk in like rats and get their jobs back while the non-union people starve, and America will still have Twinkies to buy with their food stamps.

Obama and his union minions are a failure in every way possibly imaginable.