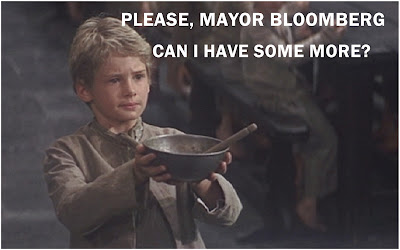 Just when you think you've heard it all...some new & improved brand of lunacy causes you to reconsider.

The entire New York/New Jersey metroplex gets creamed by a combination hurricane and nor'easter, millions lost power, thousands were displaced, hundreds lost their homes, dozens lost their lives, people are desperate for heat, shelter, water, food, clothes, winter is digging in, and that simpleton liberal asshat mayor of New York City drops his pants & craps on those in need and those who would provide.

It seems Bloomberg's food police is at it again and outlawed are food donations to homeless shelters because the city can’t assess their salt, fat and fiber content. That means that the average Joe on the street can no longer give food to the homeless.

Yeah. Exactly. Let that one sink in a second or two. 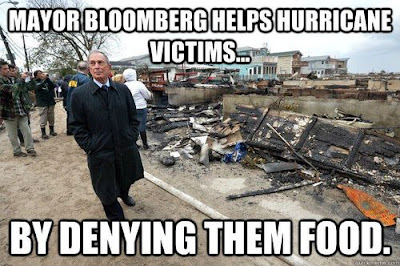 The ban on food donations was made by an inter-agency task force that includes the departments of Health and Homeless Services. That means a-hole bureaucrats from Group A teamed up with a-hole bureaucrats from Groups B & C and who knows what else, and decided to make it impossible for people who want to donate extra food items to homeless shelters & what not all in the name of Liberal Asshat Do-goodery and Nanny State Control.

The edict, issued last March by Mayor Bloomberg, is part of a larger move by the city’s Department of Homeless Services (DHS) that dictates serving sizes and other nutritional requirements. These include limits on calorie contents, minimum fiber amounts and condiment recommendations, because as grown-ass adults, in their all-knowing opinions you are incapable of feeding yourself without government intervention.

So, if you're homeless and starving, it is better for you to die than to eat something that might contain salt, or fat, or God forbid, be a large soda....

First they make you destitute and reliant on government programs and then they force you to eat what they provide. Way to go, Democrat voters!

It's absolute insanity. I don't know what else to say.

Bloomberg should be either in a straight jacket, or the people should tar, feather and strap him to a rail!