Sssshhhhh....hear that? Hear that Gigantic Sucking Sound? I do.

It's the New Suck for the Second Term of His Emptyness, Lord Obama the Immaculate (Blessed Be His Name), whereby the Leech Class of benefit scroungers hold open their mouths like baby chicks waiting to gobble down the regurgitated welfare of the beaten down American bald eagle. From the cradle to the grave, Uncle Sugar will feed you, shelter you, clothe you, and give you free phones. Welcome to the Welfare States of America. 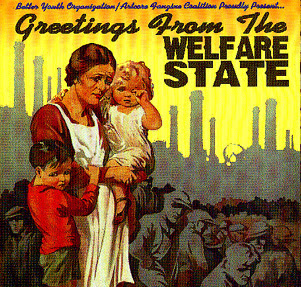 You'll recall that back in March I highlighted the mentality of the Leech Class in their own words, and that a few days earlier I had broken down the entire Leech Class system of milking the taxpayers for everything under the sun from my own vantage point as an EYEWITNESS to the shenanigans & chicanery. And right before the election I showed you a review of the Leech Class in their own words once again, expecting the Feral Gubmint to pay for all their stash.

Well, in case you needed some more reminders of how people bilk the system, look no further. 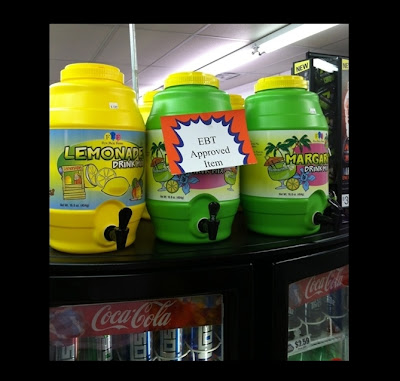 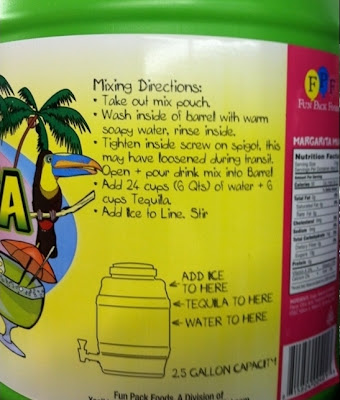 The above pictures, friends, were taken in a local gas station/convenience store by me. They show several 2.5 gallon jugs with a pre-mixed flavor powder inside. They weren't selling too well until one of the workers made a sign letting the local Leech Class know they could pay the ten bucks' cost for it on their EBT cards. In three days they sold the rest. Of note is the fact that the bright green one is for making margaritas. Yes, kids, all you have to do is sell some of your EBT money for cash (more on that later) to buy you some tequila and you have two and a half gallons of premium margaritas on tap for your next party, paid for by the taxpayers of the US of A. Of course, the tequila is optional; you could just have a sour lime drink for the kids, so it's EBT approved. There's a loop hole for everything, including margarita mix.

I mentioned the selling of EBT for cash. Say somebody has $100 on their card but needs cash now for sundry items like a hairdo, a new iPhone to supplement the free Obama phone they use to conduct illegal business or, of course, weed. They'll find someone who needs some groceries and sell them that hundred bucks of EBT for $75 cash and then either go buy the groceries with that person or just simply hand that person their card since seldom does anyone ever bother to match the name of the cardholder with a photo ID...that'd be racist.

Now, I know the clerks at this store, and one of them provided me with a plethora of valuable intel as to how the scams work. Like I've said before, the Leech Class will go into a store with a retinue of kids and buy an armload of junk food and pay for it on their EBT card, and the receipts will show the balance remaining on the card. That leaves them their own cash left over from their welfare or unemployment checks to buy lottery tickets, extra minutes for their cell phones, cigarillos to pack full of weed, Newport 100s, and 22-ounce Icehouse cans. Again, I have watched this happen with my own eyes. I am NOT making up the list of necessary Leech items out of thin air. These are the bulk of all purchases at this store, not gasoline. 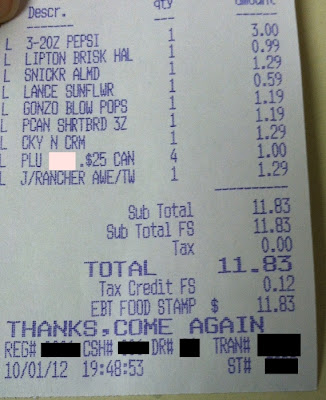 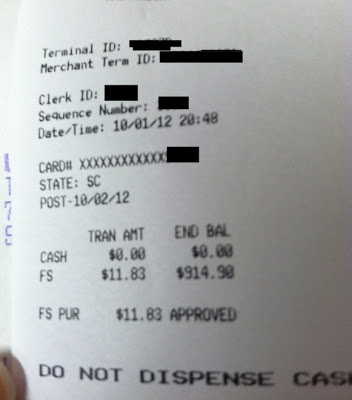 Lo, and behold, Taxpayer, your money hard at work. The top receipt shows the purchase of three 20-ounce Pepsi products, a Lipton Brisk Tea half & half tea & lemonade, an almond Snickers, a bag of sunflower seeds, a bag of Blow Pops, a shortbread cookie pack, a Hershey Cookies & Creme bar, a miscellaneous loose candy piece, and a Jolly Rancher item. Total purchase of junk food: $11.83, on your dime. The bottom receipt shows the remaining EBT balance of......$914.90. Almost a thousand dollars in groceries available. Now, here I am clipping coupons and buying off-brand stuff trying to scrimp & save every dime on my grocery bill trying like hell to make it and there's a grand's worth of vittles for free, waiting to buy more junk food and steaks and sugar-frosted cereal nuggets and cases of Mountain Dew and energy drinks.

Energy drinks? Oh, yes, my friends. That same store has certain energy drinks, like Red Bull, classified as food items in their register codes so then those items are EBT approved. Need a quick pick me up after a night of pounding cans of Budweiser Lime-a-Rita and smoking blunts packed with quality Sticky Icky? The taxpayer shall provide. Go get a 20-ounce Red Bull for $4.99. Hell, get two. Why not? It's free.

I myself am a fan of caffeinated carbonation and have tried dozens of varieties, and found a new one last weekend that I'd never tried before. It was called Neuro Fuel Max, and promised I'd basically rule the universe after imbibing a can of this magical elixir. The side of the can extolled the virtues of the product, making sure to use the word "may", as in "may increase" or "may enhance", as a disclaimer against being sued when the drinker is just as stupid as they were before they opened the can, just $1.59 broker...or were they? They were, unless they paid for it on EBT because the can itself actually says that it's EBT approved. I can't make this stuff up, ya'll. Truth is ALWAYS stranger than fiction. 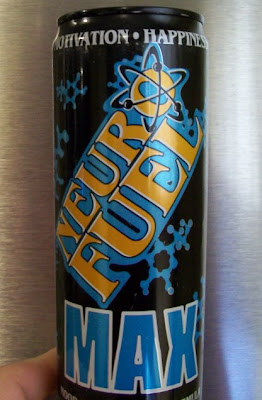 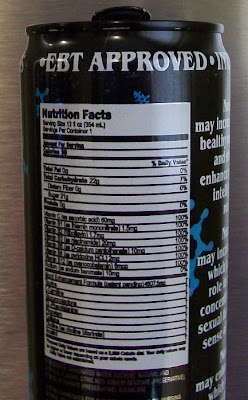 This is what we've created, the Welfare States of America. The Welfare Reform Act of 1996 (Well, actually  The Personal Responsibility and Work Opportunity Reconciliation Act of 1996) was supposed to limit the amount of time someone could be on The System and prevent generational career welfare, by which I mean people spending a lifetime on the government tit and raising kids on the tit and those kids go on the tit at 18 and continue it through the next generation. Welfare isn't a career move, America. But all the Welfare Reform Act did was make people become more creative in their measures, as in moving state to state when their benefits ran out. When I was in Maine people would get 2 years of bennies in Massachusetts or another New England state and then claim there were no job opportunities and the state would PAY TO MOVE THEM to another state, where they'd do the same thing all over again, bouncing state to state. 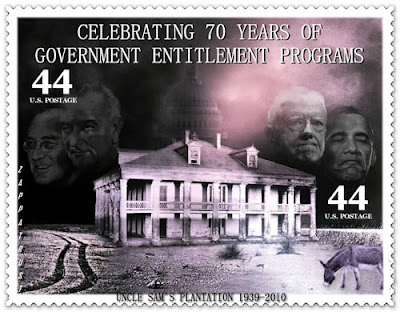 Now the current administration is just reverting back to the Carter days of generational career welfare and the Leech Class Handout Mentality. And it's just gonna get worse. 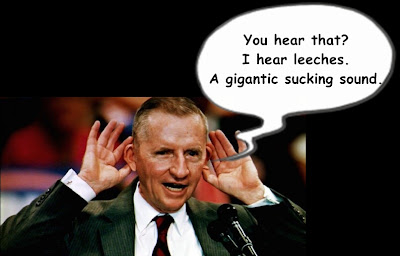 Thanks! I thoroughly enjoyed this post! Makes me wish I were unemployed and on welfare so I could suck margaritas from the teat. But then, I guess that is their plan - spread the dependency, then you can do anything you want.

Well, Have a Merry Christmas, anyway!

the old giant sucking sound was coming from barney frank. just like i suspected, despite the "recovery" obie will want to extend unemployment benefit to the chronically lazy.