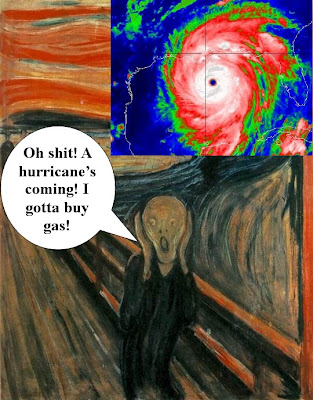 Imagine my shock and dismay to listen to the radio on my way home from work today and hear that the good citizens of the Greater Charleston Area had lost their fucking minds and were scurrying about like rats in a firestorm in a mad scramble to get to the gas station.

With coastal Texas about to play Tina Turner to Hurricane Ike’s bitchslap this weekend, the panic over the potential rise in gas prices had stations threatening to jump to five bucks a gallon overnight and rationing buyers to just ten gallons each. A word to the wise: do you really want to price gouge and threaten the fuel supply in a state where the vast majority of people own guns? They shoot people over the annual Carolina/Clemson football game; they will gladly shoot you over a tank of gas for their giant F-350 Super Duty.

As I listened to the reports on The Schnitt Show on 94.3, I started to pay attention to the gas stations I was passing along Dorchester Road. Sure enough, there were lines 30 cars deep. Prices were already up 20-50 cents in the span of a couple hours.

Ironically, the price of oil closed DOWN again today from yesterday’s close. We’re back down to just barely a hundred dollars a barrel. Yet, you assclowns and mouth-breathers out there aren’t happy unless you have something hurricane-related to panic about. We weren’t swallowed by the sea last weekend when Tropical Drizzle Hanna flitted on by, leaving just a couple of scattered showers in its wake, so now you’re in some sort of twisted Munchausen’s-like proxy panic. 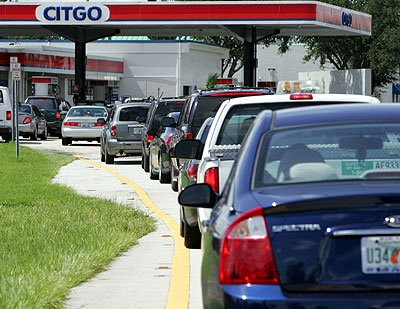