Love is in the air...and on your windshield. 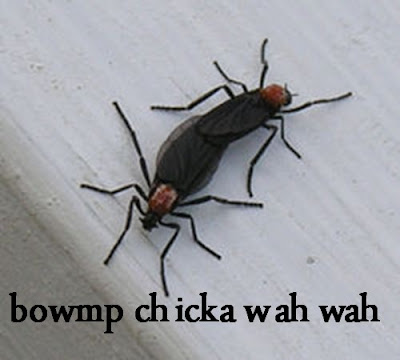 It’s that time of year again, when the so-called Lovebugs swarm to and fro, making a mess of things here, there, and everywhere. Have heart, though; they’ll be dead & gone in a week or so.

The lovebug, Plecia nearctica, is a member of the march fly family, related to gnats and mosquitoes. The adult is a small, flying insect common to parts of Central America and the southeastern United States.

For most of the year, lovebugs are beneficial in that the larvae live in grassy areas and feed on dead vegetation within the thatch, resulting in not only the eventual release of nutrients back into the soil, but also decreasing excessive thatch which can be detrimental to grass growth and serve as a protective cover for serious grass pests like rats and mice.

The adult lovebug feeds on the nectar of flowering plants. Upon reaching maturity the lovebug spends almost the entirety of its life copulating with its mate, hence its romantic nickname. The male and female attach themselves at the rear of the abdomen and remain that way at all times, even in flight.

The flies mate soon after emerging from their pupae. A swarm of males will gather around female pupae. Once the females emerge as adults, the males will rush to mate. Mating takes place almost immediately after emergence of the females. Lovebugs live to mate and disperse, and males will court more than once in a lifetime if they survive long enough. A male's lifespan is almost four days under laboratory conditions. The larger female can live three days under laboratory conditions. Not a long life, but it’s action-packed.

After courting, the male and female interlock to mate and grasp each other as they fly. The male is often dragged around by the larger female as they fly together. Despite urban legends stating that they stay attached even after the male dies, with the female dragging his body around until she lays her eggs, lovebugs can detach from each other and live independently, for a couple days at least.

Females lay up to 350 eggs in debris, and about 20 days later the eggs hatch into larvae. The larval stage may take up to nine months before they pupate. Commercial use of cut sod for "instant" green lawns can result in the transportation of the larvae to newly built developments.

Lovebug flights can number in the hundreds of thousands. The slow, drifting movement of the insects is almost reminiscent of snow fall. Two major flights occur each year, first in late spring, then again in late summer. The spring flight occurs during late April and May. The summer flight occurs during late August and September. Flights extend over periods of four to five weeks. 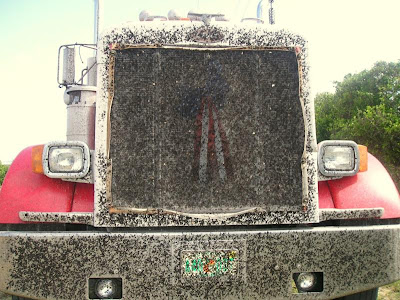 At least your chances of getting run over whilst having sex are minimal at best...

Lovebugs tend to congregate around highway intersections, traffic lights, gas stations and truck stops. It is thought that they are attracted to the formaldehyde found in exhaust fumes, as well as hot engines and vehicle vibrations. They seem to have an affinity for the color white, massing on white walls and vehicles, maybe because of the reflected heat.

Perhaps most frustrating to those who must endure the lovebug season is the mess the splatter can make on the hood of a car. It's the females who do the most damage, because they're packed full of eggs. The lipids in the eggs bond to the finish in the baking sun and can potentially damage your paint. Helpful hint: Wash your car within 24 hours of a lovebug run-in. They taste nasty because of their acidic nature, so generally even birds & spiders won’t eat them.

Insecticides do not get rid of lovebugs. Repellents such as citronella and DEET don't work because the flies are not attracted by carbon dioxide like other insects. While most household insecticides will kill lovebug adults, it does little to decrease the population.

So just grin & bear it, kids. They’re messy and annoying, but they’ll die off soon enough, for a few months at least. 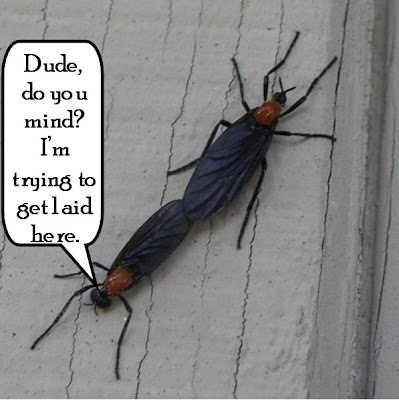