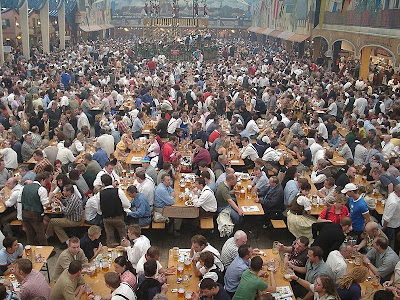 Think of it as a party with a few thousand friends


Y’know, I’d damn near forgotten what time of year it is. We ignorant Americans like to imagine that Oktoberfest is sometime in October, but it actually starts in late September.

The Oktoberfest is a sixteen-day festival held each year in Munich, Germany during late September (and running to early October). The Munich Oktoberfest, traditionally, takes place during the sixteen days up to and including the first Sunday in October. It is one of the most famous events in the city and the world's largest fair, with some six million people attending every year, and is an important part of Bavarian culture. Other cities across the world also hold Oktoberfest celebrations, modeled after the Munich event. This year’s fest, the 198th annual fest, runs from September 20th to October 5th. Hurry; there’s still 8 days left!

I personally never made it down to Munich for the official Oktoberfest, but instead prowled the beer tents of the fest held in Bad Cannstatt, a district of Stuttgart down by the Neckar River. Although the Cannstatter Volkfest is not strictly speaking a beer festival, it is considered by many to be the second largest beer festival in the world after the Munich Oktoberfest. According to estimates about 4.2 million people visited the festival in 2006. The Volksfest begins one week later than the Oktoberfest…oh, man!!! The fest started LAST NIGHT!!!!!!

Okay, I just reached into the fridge for a bottle of Hefeweizen. I may not be able to go to the fest tonight, but in my heart, I’ll be in the Stuttgarter Hofbrau tent with Rick and Greg and Ray and Jim, swinging a giant one-liter beer mug full of golden goodness, eating a giant pretzel to soak up the alcohol, and singing “Eine Prosit, eine Prosit der Gemutlichkeit” (A toast, a toast to health & happiness) and chanting along as the toast master says “Zicke, zacke, zicke, zacke, hoi, hoi, hoi!!!!” 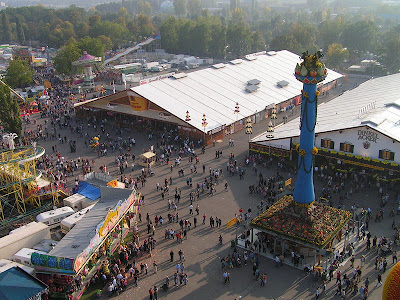 At times it’s hard to believe that it’s been 20 years since I first sat at the tables inside the Festzelten (Fest Tents) sponsored by the various breweries. I split time between the Dinkelacker, Stuttgarter Hofbrau, and Schwaben Brau tents during both the 1988 and 1989 fests, raising many a mug with my friends. I miss you guys dearly, and tonight I raise my brew again to salute you.

You can take the boy out of Germany, but it’s been impossible to take the Germany out of the boy. Tschuessele bis Spater, alle meine Freunden! Vielen Dank! 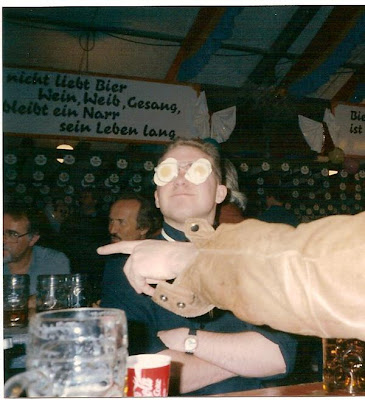 Yes, that's me, in 1989, pretty pie-faced in the Hofbrau tent, and yes, I am wearing two plastic fried eggs over my eyes. Don't ask... 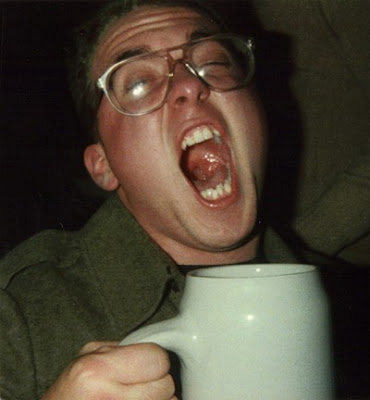 I've wanted to attend an October Fest in Germany ever since one of my high school teachers told me that it was responsible for his first child!

It doesn't hurt that my lineage from my mother's mother's side is German (Schroeder) either. Anyway, maybe we'll bump steins there some day.