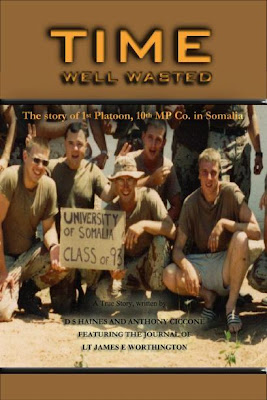 Time Well Wasted is the true, unembellished story of First Platoon, 10th Military Police Company and their deployment to Somalia at the beginning of 1993. Before there was a Blackhawk Down, there was Time Well Wasted. We all saw the movie. Everyone knows the story of the Rangers and the pilots and the Delta Force guys. (Of course, they kinda forgot to go into detail about the guys who rolled out to do the rescuing: guys from the 10th Mountain Division, along with units from the Pakistani and Malay armies, when they made the movie.) No one in the media really mentions the buildup to the Battle for Mogadishu, and no one in the media seems to really recall anything about American troops coming to Somalia in the first place on a supposed humanitarian mission, other than to rehash that goat-screw where the Navy SEALs landed on the beach in the middle of the night live on CNN and every other news service.

Pulled from a training exercise with zero warning, and having just recently returned from a six-month deployment to the Sinai, the men of First Platoon soon find themselves leaving the snowy upstate of New York for the sweltering dustbowl of the horn of Africa as part of Operation Restore Hope. Imagining themselves feeding the starving Somali people and keeping them safe from clan infighting, the Renegades of First Platoon instead find themselves overworked, undersupported, completely unappreciated, and reduced from a combat Military Police unit for a light infantry division to a glorified taxi service for self-important officers and staff pogues, in between driving in circles around town getting rocks thrown at them by the local kids and occasionally getting shot at by “skinnies” hopped up on khat weed.

Hampered by ever-changing Rules of Engagement and a command structure that seemingly has no idea what the mission is or how to best perform it, the men fight heat, bugs, boredom, Spartan living conditions amidst the squalor of Somalia, potential diseases lurking under every pebble, and the bane of every soldier: the people higher up the food chain who make life miserable for the pee-ons in the enlisted ranks. No one can seem to be able to tell them when they’ll be redeployed home, despite the constant influx of new, larger MP units arriving in country daily.

First-time author Dave Haines, writing with platoon-mate Tony Ciccone, has put together an excellent read, told plainly and without any personal horn-blowing. I found it to be a book that immediately sucked me in for several reasons. I, too, was a Military Policeman and at the time of First Platoon’s deployment, I’d been out of the Army for just less than a year. There were guys that I knew who deployed to Somalia and to Bosnia in the months following my return to civilian life, and in my mind it could just as easily have been me in those same boots. And in reading the gritty, compelling story of the truly bad things that these guys saw and endured, I just had to think “There but for the grace of God go I…”

Like Haines says, “…there are some things that you just can’t un-see…”. Thankfully, most of us will never have to see bullet pocks in walls caked in dried blood where people were executed. We’ll never see human bones bleached by the sun lying where the body got dumped. We’ll never have to set fire to a drum of human waste after dragging it out from under a hastily-rigged latrine. We’ll never see a guy with a parasitical fly larva inside his arm. We’ll never get shot at or have to shoot back at those who are shooting at us. We’ll never see eleven-year-old kids carrying AK-47’s with the ease their peers in polite societies carry school books. We’ll never witness an entire nation rip itself to shreds and implode with complete and utter disregard to humanity or the sanctity of life.

Every page of this book took me back to my own four years of service, with memories flooding back and making me shake my head in wonder at how similar Haines’ point of view was to my own. Funny little anecdotal things like flammable coffee creamer, becoming a gourmet chef with MRE’s, and so many other little details that I’d never quite forgotten because they were shared experiences of my fellow soldiers that helped make me the man I am today, for better or worse.

Each chapter of the book also contains something else that is crucial to the telling of the story. Haines was able to include the journal entries of his platoon leader, Lieutenant James Worthington, and these journal entries offer a critical insight and secondary viewpoint to the main narrative. I found it fascinating, and validating, to see that this man, a commissioned officer in the Military Police Corps, shared the same frustrations at the chain of command that the enlisted men had, and that those same frustrations and anger and animosity towards clueless higher-ups who sought only to make their own selves look good and live comfortably at the expense of their subordinates turned a good officer into another disillusioned trooper.

Please, read this book. If you’re a civilian who has never been in the military, it could shed some light for you on what it’s like to be a 20 year old deployed to a war zone and help you understand a little of what America’s best & brightest are enduring every day. If you are (or were) an MP, this is crucial reading. Anyone who served will find pieces of themselves in these pages. You won’t be disappointed.

Time Well Wasted is available at Amazon.com, through Barnes & Noble and at Books a Million. You can also visit Dave Haines on MySpace, either through my page’s friends list or directly at www.myspace.com/dshaines
Posted by Steve: The Lightning Man at 9/09/2008 10:14:00 PM

You rock Steve! That was a great review. I hope that by you and I getting this book out to more people will help put it on a larger map. My roommate, who is ex Army, is reading it now. I think I'm going to take a $150 plane ticket from NH to PA for the Army Navy game with Dave. :-)