A whack to the melon 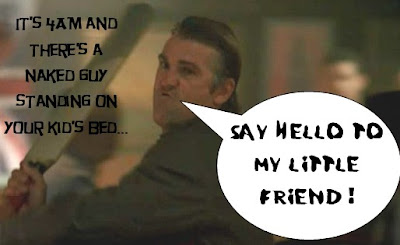 Hmm…..I came across this story today through the AP wire.

An angry Deltona, Florida father whacked his teenage daughter's boyfriend with a metal pipe after finding the boy naked in his daughter's room.

Authorities say the father, Raul Colon, 45, didn't even know his daughter had a boyfriend or that the youngster had been sneaking into the home for more than a year.

When he heard noises coming from his daughter's bedroom Thursday morning and saw a stranger standing naked on the girl's bed, he swung a metal pipe he had taken from the garage, hitting the 15-year-old, according to a Volusia County sheriff's report. He then chased the teen out the front door and called police.

The boy was taken to the hospital where doctors closed a head wound with staples.
Colon was charged with aggravated battery on a child and bonded out on $10,000.

According to the report, Colon heard the noise in his daughter's room when he got up at 4 a.m. to let his dog out, as he does every morning. Colon told deputies he chased Lucas Contreres through the kitchen, living room and through the front door and out into the street and called 9-1-1.

Colon's daughter later told deputies she had been seeing Contreres for 18 months but did not tell her father about the relationship. Contreres had sneaked in through a bedroom window at 3 a.m. Thursday to have sex with her, the 15-year-old girl told deputies.

Contreres was found at a hospital in Orange City where he received staples to close cuts on his head. His injuries were not life-threatening, deputies said.

Contreres told deputies a similar account to Colon's. He said Colon came into the room and started swinging at him with the metal pipe. He jumped out of the bed and began running through the home to get away from Colon. Once outside, he jumped on his bike and went home. His sister later took him to the hospital, deputies said.

Although Contreres' father said he wasn't sure whether he wanted to press charges, deputies took Colon to jail anyway.”

I really can’t find fault with what the dad did, actually. If I heard a noise in my home at zero-dark-thirty and found a naked dude that I’d never seen before in my daughter’s room, I’d swing a lead pipe too. Actually, I investigate noises with a large-caliber handgun, so that kid got off lucky with a whack to the melon.

I can’t believe that the cops arrested & charged him. The kid’s dad hadn’t even pressed charges yet, and I say the father acted in good faith against what he believed was a home invader, protecting his child from a potential rape. I guess the cops needed to arrest somebody; hell, they drove all the way out there when the Hot Donut sign was on at Krispy Kreme, so by God, someone was going to jail.

With as many people who own guns around my neighborhood, a kid pulling a stunt like that is likely to get zipped up in a rubber bag over a piece of ass instead of just getting a couple staples.

Should make for some interesting conversations in home room on Monday though when the teacher asks what everyone did this weekend.

“I went to the beach”.
“I went shopping at the mall.”
“I watched some football on TV.”
“I got my freak on and made the news for getting my cranium stapled shut after her dad swung for the cheap seats like I was a birthday piñata.”

And yet, I somehow feel that this kid didn’t learn anything from this, and his friends all think he’s the cat’s ass. 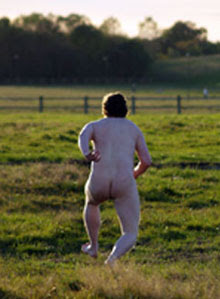