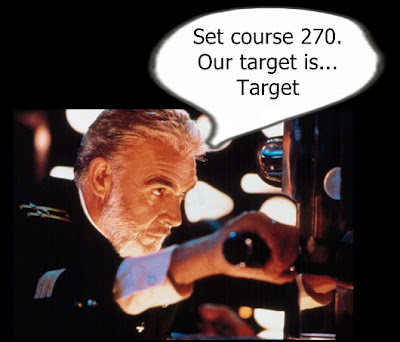 
You can, indeed, over-do a good thing.

Look, I like Christmas just as much as the next fellow, but stop cramming it down our throats. Sure, it’s hard to sometimes get in the holiday spirit of the season when it’s still 75 degrees out and instead of the snowfall of a White Christmas you have the dead brown grass of a Carolina Pseudo-Winter. But really, is it just me or did the holiday season start a hell of a lot earlier this year?

Never mind Black Friday; it’s Black November. All I’ve heard about for the past couple weeks is “Black Friday this” and “Black Friday that”. There are dozens of websites devoted to “leaked” early editions of major retailers’ Black Friday ads. Wal-Mart has changed their policy regarding stores being open to avoid trampling rushes. Used to be, in times long ago, the Christmas shopping season started the day after Thanksgiving. Now, it starts the day after Halloween.

Seriously, stores started putting out the Yuletide décor as they were taking down the Halloween gear, if not before so as they did in my local Mart of Wal. The smartest people out there bought Halloween costumes as Christmas gifts on November 1st at a 75% discount. I guess the economy is so utterly FUBAR that stores are desperate for business and thus started the holidays early in hopes of prying more money from our fingers.

And of course, there’s the music.

I remember getting into the Yule spirit with holiday music in the two weeks leading up to Christmas. They’d play a holiday-themed song about every 30-60 minutes, and on the 25th itself they’d play a lot more, sometimes nothing but Christmas songs from about 6AM to noon. Then it got to be where the music started right after Thanksgiving, and that morphed into at least one station in every town playing the holiday cheer non-stop, from Thanksgiving on. Now, we have a station here (and likely in your town too) that started with the non-stop, 24/7, repetitive Christmas music two weeks before Thanksgiving. Thanks, Corporate Radio and Corporate America. Christmas is just another commercial venture and source of revenue to you.

There’s but only so many Christmas songs out there. You have your traditional songs from the hymnals, like “Joy to the World”, “Oh Come All Ye Faithful/Adeste Fidelis”, and “Silent Night”, and you have the non-religious carols we all grew up on, like “Silver Bells” and “The Christmas Song” with its chestnuts roasting on an open fire.

You have the more modern holiday songs, like “Baby its Cold Outside”, “All I Want for Christmas Is You”, and “Merry Christmas, Baby Please Come Home”, and the comedic songs like “Santa Baby”, “Grandma Got Run Over By a Reindeer”, and Adam Sandler’s various iterations of his Hanukkah Song.

And since every artist on every record label feels the need to record a Christmas album when they run out of fresh ideas in order to fulfill their contract obligations of releasing so many albums, you’ll hear the same song over & over & over done by a litany of artists. Should you choose to listen to Holiday Music, you’ve got no choice but to suffer through myriad versions of the same songs over & over. We all have our favorites. Take “Silent Night”, for example…some people prefer Stevie Nicks while I prefer to hear Enya doing it in Gaelic. I like to hear Jars of Clay doing “Little Drummer Boy”, but I also like the Bing Crosby & David Bowie version, too.

Eventually I think I’ll rustle up a list of my favorite Christmas songs for my readers.

But really, am I wrong in my observations that the Holiday Season started on November 1st? The kids were still in sugar comas from trick-or-treating and the young adults were still waking up either on the floor where they drunkenly passed out the night before or in a bed next to some stranger in a Slutty Princess or Pimp Vampire suit, that they drunkenly went home with after the party and are now horrified by the ramifications, and America’s retailers were wheeling out the tinsel for the dog to choke on and the colored cheap glass balls for the cat to bat around & break.

Middle-aged America was picking up the toilet paper from their trees and older America was pondering life under ObamaCare’s Death Panels without Social Security while shoveling the remains of a burned bag of dogshit into the garden, and America’s retailers were putting the finishing touches on commercials to let you know that your family will crumble unless you get them new $500.00 cell phones or that if you buy overpriced rags made in a Third World Country at some trendy mall store, you too can be a popular, size 0, desirable person at the Christmas Party…or you could just wear the Slutty Elf and Pimp Santa suits? 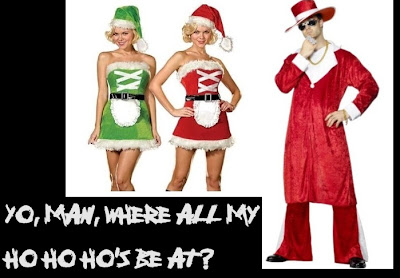 They cram it down our throats for all the wrong reasons. As for the music, the first of November isn't attracting me as a listener to convert playing Christmas music 24/7.

Well, you're a grumpy elf today!
Tuesday I heard a woman at the craft store say "Wow, Christmas really snuck up on me this year." -It was November 17th!

Seriously though, I like it.
I too, used to complain about Christmas being commercialized, but now I find it a blessing in a sense. Christmas is being eradicated from the schools, public buildings, and other PC venues, and it's nice to still have it recognized by a large segment of the society!

Some of the stores here in the Cincinnati area were putting up their Christmas stuff BEFORE Halloween was over.

I can't take it. By the time Dec. 25 gets here, I'm so burnt out that I can't wait for it to be over and they can start beating the "what will your New Year's resolutions be" horse to death.

I know how you feel and am symnpathetic. But also, one must feel a little sorry for these merchants who are staring down both barrels of a bleak holiday season:

(1) No one is working or, those that are, have a meager pittance to spend on gifts and celebrations.

(2) The calendar conspired this year to afford the shortest holiday shopping season possible with Thanksgiving falling on the last Thursday of the month.

(Hmmmmm. Isn't "Holiday Shopping season" sort of like "Office of the President-Elect"?)

Me? I look forward to Boxing Day!

I'm with Lynnae, I like the fact that Christmas is already in the air. My bride's favorite station is already playing all Christmas music and we've been doing shopping for the family (mostly online). I've been putting money in the Salvation Army kettle every time I go by them.

As for the sales and such, I have already set my budget, so there's no incremental $$ to get..