It seems that I missed some sort of spectacle at the Dick Clark Memorial Contrived RIAA SuckUp Showcase, um, I mean, The American Music Awards, this past Sunday night. From what everyone seems to be clogging the blogosphere with, last year’s American Idol runner-up Adam Lambert shamelessly tried like hell to out-Madonna Madonna, out-Christina Christina, and out-Britney Britney with a stage show full of faux-S&M themes, crotch-grabbery, man-kissery, crotch-facery, finger-bangery, dancers galore, and an attention whore at center stage.

Everyone seems up in arms over this supposedly outrageous behavior, their tender sensibilities besmirched by a flamboyant gay man doing his level best to shock the world on live TV as he sang his debut single. Personally, I could give a shit less.

I’m not offended by a gay kiss on TV. I’m not titillated by scantily-clad stick-women gyrating to the beat. I’ve seen better S&M references on Family Guy.

What actually offended me was that Lambert felt the need to resort to such douchebaggery in the first place. 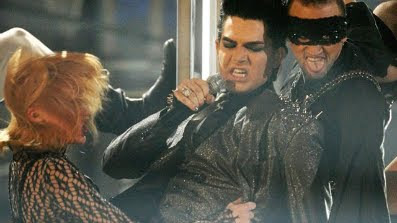 First of all, Madam Glambert, you’ve been famous now for all of about six minutes. I realize that it all very well could be over in another 9 minutes, but shouldn’t you at least wait till you have an established hit and a bona-fide career before you start trying to shock the world into accepting you no matter how outrageous you become?

Madonna at least didn’t start being controversial 'til her second album. She’d released 5 singles, (3 made the Top 20, two made the Top 10, and one went to #4) before “Like a Virgin”. I haven’t even heard you on the radio yet. Someone said they heard you screeching during the end credits to the film “2012”, but as I have yet to see the movie I can’t say for sure. I know that this debut single of yours wasn’t all that; just more of your incessant caterwauling with your tongue hanging out on the high notes. Sounded like two cats in heat locked in a dumpster, with a backbeat.

Being edgy is cool. Raising awareness & acceptance of every lifestyle is cool. But being outrageous in an attempt to offend people into paying attention just makes you a tool. Think Marylin Manson with better guy-liner. 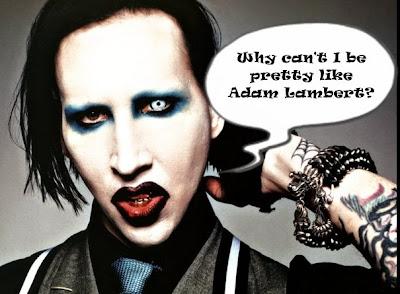 I think though what really offended me most of all was the way the media has treated this.

Good Morning America dropped Lambert off it’s telecast the next day like he was the Anti-Christ in revenge for his unscripted antics on their ABC network. Dick Clark was probably just millimeters away from another strroke from apoplexy. CBS snatched him right up, not because he’s talented, but because of the ratings he’d bring in from the scandal. It could have been Khalid Sheik Mohammed singing “Pop Goes The Weasel” for all they cared, so long as he'd kissed a guy the night before. CBS however screwed the pooch by blurring Lambert’s dude-on-dude kiss, and yet they never blurred the Madonna/Britney kiss. America is okay with two girls kissing, but two guys kissing shall rip mankind asunder, and the Earth’s crust shall erupt in fire & brimstone with Satan himself leading the charge from the bowels of Hell? Fucking please. Grow up. Ya'll act like being gay is a disease and you can catch the Gay Cooties. Morons.

And then there’s the clowns at Dick Clark Productions, who put on the AMA awards show. They trolled the internet after the show looking for anyone daring to post up the Lambert vid, and got You Tube to not only delete the vids but filed copyright infringement claims on people regardless of whether they had the video bootlegged or not. If it had Lambert in the title, they nailed them. Of what do I speak? I found this guy’s rant against Dick Clark Productions on YouTube; it was quite eye-opening, if you can get past the fact he’s wearing an Obi-Wan Kenobi mask and disguising his voice.

Face it, ABC & DCP: Once you broadcast it, it’s gonna end up on YouTube. Welcome to the Information Age. So long as no one’s re-broadcasting it to make a fast buck, get over it and accept that it’ll end up online. Just to spite the censors at Dick Clark Productions, I think I’ll include a couple stills from Lambert’s spectacle. Sue Me. And then sue Fox, cuz that's where I got the pics. 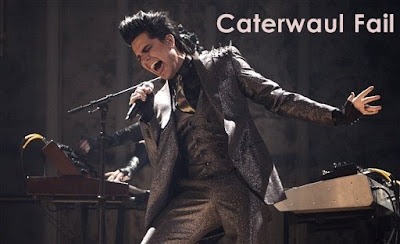 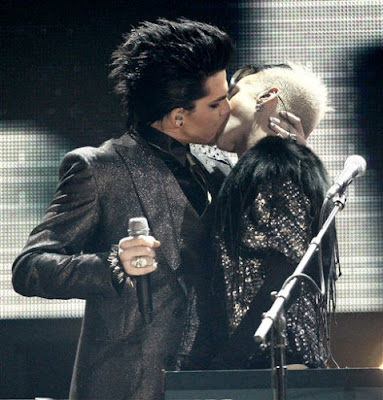 But really, Lambert. You may have torpedoed your career before it even started. I know that folks coming in second on Idol usually do better than the winners themselves, but there’ve been dammed few bona-fide real stars to come off that show. A few more are working on having success; the rest are one-hit wonders or simply forgotten. It’s a fey, fickle world, Pop Music. Kelly Clarkson, Carrie Underwood, Chris Daughtry; big stars. Taylor Hicks was dropped from his label within a year.

Clock’s ticking, sweet pea. Make sure your impact is a positive one. 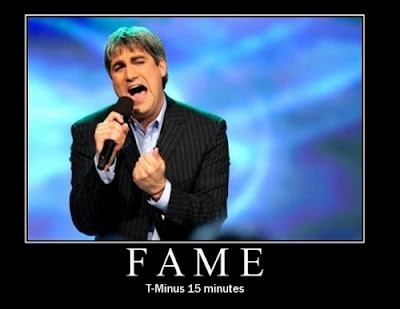 Excellant post! I had not heard of this person until the 'controversy' as I have never seen 'Idol'. I usually could care less about Hollywood except when they visit socialist leaders,but you summed this up quite well.

Gee, and I missed the show? Aw! LOL! I must have been washing my hair, or filing my nails.

"What actually offended me was that Lambert felt the need to resort to such douchebaggery in the first place."

Not surprising though, coming from such a d-bag.

What made me uncomfortable was the fact that the keyboard player did not even remotely look like he WANTED to be kissed. If Lambert did that to a woman, he'd be lambasted for his boorishness. He shouldn't get off the hook just because it was 'edgy'. I'm sure the dancer who had his face shoved in Lambert's crotch didn't appreciate THAT, either. Blech. You can't just go around doing that to people whenever you want. It shows a lack of respect.

Do you have any research skills?

1. The keyboardist/bass guitarist didn't mind the kiss. He egged Adam on earlier.

2. There was a glitch in the sound system. Janet and Whitney didn't even sound good. Can they sing? Hell yeah! And so can Adam.

3. Adam was being harrassed by OUT magazine's editor. Obviously it bothered him enough for Adam to flip him the bird on live TV.

For more info these subjects, be a good little journalist, like I know you can, and do the research yourself. (Something you should've done before spewing your verbal garbage all over the place anyways.)

When the fuck did I become a journalist? I blog, and as such I give my opinions. For FREE. A journalist gets PAID. I'm not a reporter, sunshine. As soon as someone starts paying me for what I write here, then I'll waste my time on guyliner details like whether or not the keyboard player egged him on or not.

I gave my opinions based on seeing a playback of the performance on YouTube. I had by far better things to do with my time than watch a washed up Whitney comeback attempt and Janet Jackson medley o' hits.

Note to self: I must make sure I clear all my future blog posts with Out Magazine before I post.