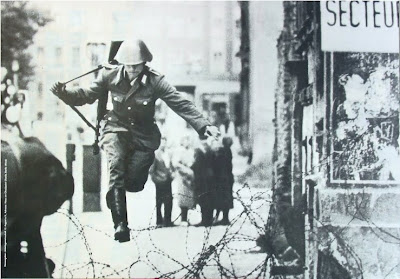 Conrad Schumann bails out of East Berlin to a better life...

In a speech at the Brandenburg Gate commemorating the 750th anniversary of Berlin on June 12, 1987, Ronald Reagan challenged Mikhail Gorbachev, then the General Secretary of the Communist Party of the Soviet Union:

“We welcome change and openness; for we believe that freedom and security go together, that the advance of human liberty can only strengthen the cause of world peace. There is one sign the Soviets can make that would be unmistakable, that would advance dramatically the cause of freedom and peace. General Secretary Gorbachev, if you seek peace, if you seek prosperity for the Soviet Union and eastern Europe, if you seek liberalization, come here to this gate. Mr. Gorbachev, open this gate. Mr. Gorbachev, tear down this wall!”

Twenty years ago, I was in the Army; a 20-year old Military Policeman stationed 5,000 miles from home in Goeppingen, Germany. It was a great little city full of wonderful people, and I was lucky to be serving with some really great guys in my squad. At the time, Germany was still two separate countries, East & West, and Berlin was a divided city punctuated by a giant concrete wall.

All that was about to change…

After 28 years, nearly 5,000 escape attempts, and as many as 200 deaths, the East German government announced on November 9, 1989, after several weeks of civil unrest, that all East Germans citizens could visit West Germany and West Berlin. Crowds of East Germans climbed onto and crossed the wall, joined by West Germans on the other side in a celebratory atmosphere. It was one giant continual party. You could feel a palpable change in the air, and we knew the Cold War was ending and that we’d won. 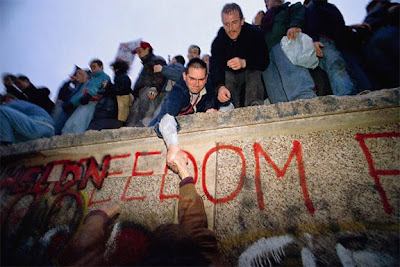 Less than two months later, a massive New Year’s Eve party was held at the Wall. Nationwide, Germans partied it up while David Hasselhoff sang his hit single ”Looking for Freedom” from atop a platform, wearing a leather coat full of light bulbs and a piano-key scarf, looking for all the world like a complete douche, but the Germans loved it. I’d recently made friends with a fellow named Thomas Kaps, a former East German soldier who had defected to the west and could now safely go home and visit his mother, who didn’t even know he’d defected six months earlier. I was there in-country as a part of history. By God, as a soldier I felt proud to have been there. It was a great time to be alive.

The fall of the Berlin Wall paved the way for German reunification, which was formally concluded on October 3, 1990, about 3 months after I left Germany.

Last weekend former German Chancellor Helmut Kohl, at the beginning of the celebrations to make the anniversary of the fall of the wall, standing together with former Soviet leader Mikhail Gorbachev and former U.S. President George H. W. Bush, said, “We Germans in our history don’t have very much to be proud of.” But he continued. “I have nothing better to be proud of than German reunification.”

On November 9, 2009, Berlin will celebrate the 20th anniversary of the fall of the Berlin Wall with a "Festival of Freedom", during which over 1,000 foam domino tiles over 8 feet tall will be stacked along the former route of the wall in the city center and toppled. Mega rock band U2 played a free concert for 10,000 fans at the Brandenburg Gate on Thursday night, surrounded by a two-meter high barrier wall to obscure the view of the show by non-ticket holders. How ironic that Champion Of Freedom, almighty Bono, does a show to commemorate the fall of the Berlin Wall from behind a new Berlin Wall. 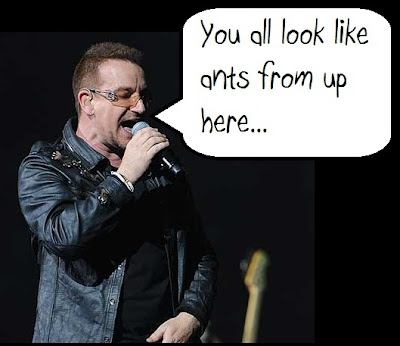 And notably absent from the celebrations will be Mister Freedom Himself, B-Hussein-Obama. His Obamaness has decided to snub fellow world leader Angela Merkel and not go to Berlin for the celebrations. I find this odd; he’s a total media whore and loves to make speeches. Even if his Brotherhood of the Traveling TelePrompter can’t set up his favorite screens with a 240-volt converter, I’m sure he can borrow one while over there. Obie loves to travel to foreign lands on our dime to kiss peoples’ asses, so why turn down a trip this time? Maybe it’s because he’d be celebrating freedom and the Right’s victory over socialism in the Cold War and that’s distatseful to him?

He claims that he’s too busy getting ready for an upcoming trip to Asia, and I guess he needs to study up on who to bow to and who he needs simply to apologize to. Uber Democrat JFK famously told the locals, "Ich bin ein Berliner." On the 20th anniversary of the last century's biggest triumph of freedom, Obama is telling them, "Ich bin beschäftigt" - i.e., I'm busy. Nice way to repay that crowd of up to 200,000 that came to see you in Berlin last year, Obie, you dunce. 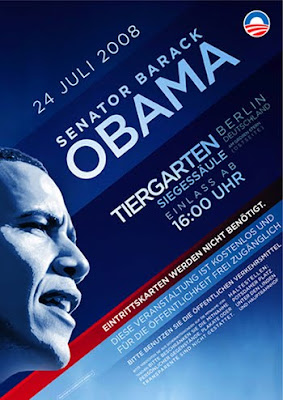 Give B-O-zo a break. Planning the destruction of America is a time consuming job, man.

Why would he go celebrate FREEDOM restored in another nation, while methodically (and diabolically)stripping FREEDOM from his own?

Since his election, I don't know what I feel more. Sometimes he makes me so angry I could spit, and I wonder how everyone was so misled by him in the first place. At other times my heart breaks because I am so sad. Our country is losing so much that we may never recover.

What is so wrong with FREEDOM and FREE WILL?

It's worth mentioning that when the asshole went to Germany during the campaign, the event was a free rock concert with free beer. The asshole came out during intermission to a drunken boisterous crowd.

Funny how the state run media never mentions that.

PS - Ich bin ein Berliner, by JFK means I'm a hotdog, as Berliner is german slang for a very famous and popular hotdog.

And why would JFK claim to be an honorary German anyway. I never understood that.

Where I lived, a Berliner was a jelly donut. A hot dog was just a wurst, either a Rotwurst or weiswurst.

I remember the wall coming down. I watched it on tv and cried.

Steve, guess that's it. I'd always heard it as a hotdog popular at the time, called a berliner.