A Republican Voice in Maine

My high school classmate Dean Scontras had this editorial published today in the Portland Press Herald up in Maine. Dean's a former GOP candidate for Congress in Maine's First District, and a real Republican instead of the vanilla-flavored Maine RINO we've seen as of late. He's also recently formed up an exploratory committee to see about possibly running again. I urge you guys to give his article a read, and to lend Dean your support.

It's worth it to see the article at the PPH website so you can also see the comments left behind...


Americans want to cut back government spending to sustainable levels

They think Republicans and Democrats have both failed to keep budgets within bounds. 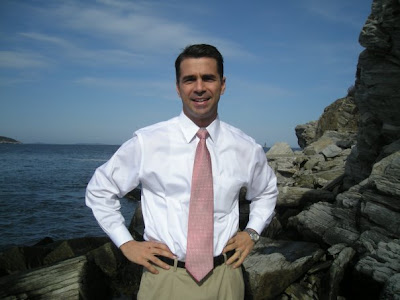 ELIOT, Maine — Judy Shelton, author and economist, recently remarked in an op-ed piece: "If money is a moral contract between government and its citizens, we are being violated."

In addition, a recent New York Times poll suggested that Americans overwhelmingly want to bring down the debt and spend less.

Americans are making the connection between spending, debt, borrowing (from foreign entities) and the effect on currency.

Subsequently, like the limited omniscient protagonist in a good murder mystery, Americans and voters are having the "Aha!" moment where they finally discover "whodunit" – our elected officials.

More so, they are coming for some accountability. Our elected officials and incumbents are about to pay the price of the silent fiscal awakening of so many in this state and across this country.

The subprime mortgage mess resulted from the false promise of risk-free lending in perpetuity, coupled with the profits that could be made by such carefree lending practices.

Appropriately, after learning what happened between the government and some lending institutions, we were properly outraged.

Therefore, it is with even a greater sense of irony that the architects of the government's finances – our elected officials – are claiming that they can continue to borrow and mortgage our future in perpetuity without similar consequences than those incurred by the subprime fallout.

Unless Washington dramatically changes its spending habits, it is hard to foresee a soft landing.

Falling sort of feels like flying until you hit the ground. The ground in this case will be come when our lenders call their loans and seek other investment alternatives.

If the United States were any other county, given our unfunded liabilities and growing deficits, normal lending institutions would never extend credit to such an "upside down" entity.

In fact, we are the only country that can print money and expect others to simultaneously purchase our "paper."

China is one of the largest. It currently holds $2 trillion in our assets.

Of all the "printed" dollars in circulation, 75 percent are outside of the United States.

Recent indications by both China and India imply that the spend/print/borrow trend may be coming to a conclusion.

China and India are showing serious signals of reluctance.

If China merely slows the pace at which it purchases our debt, it will have a significant ripple effect through our entire economic system, right on down to our localities and muncipalities.

When you consider that the cornerstone of our financial system is the "risk free rate" (the return on Treasury bills and bonds with the full faith and credit of the United States to guarantee repayment) what happens when the risk associated with our debt goes up?

What happens when your lenders lose confidence in you?

It doesn't take a mathematician to conclude that our spending rate is simply unsustainable and our lenders are getting nervous.

The voting of incumbents has resulted in the continuation of this vicious circle of borrowing and spending.

According to the Pete Peterson Foundation, "The government is in a roughly $56.4 trillion financial hole that is growing by $2 trillion to $3 trillion every year; nothing is done to address it."

The riddle that remains confusing is: Why do we simultaneously demonstrate a disdain for deficits though we continually demonstrate an affection for politicians who perpetuate them? If they cannot break their spending addiction, we must do it for them and vote them all out next November.

Make no mistake about it, Republicans and Democrats are equally at fault.

When you exclude the Social Security trust fund, we have only balanced the budget once in 50 years!

We cannot allow the inertia of comfortable incumbency to be a substitute for sound economic policy.