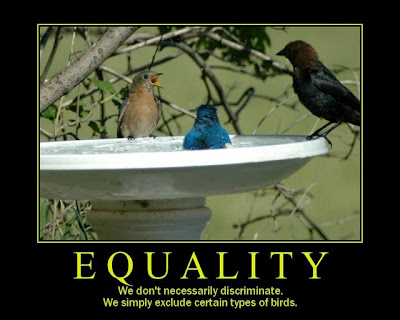 Most people say they’re for equality, so long as everyone conforms to what they believe in…

Well, whattaya’ know? It’s Election Day. Perhaps the Republicans will score a few victories today and begin the march towards 2012. I know that’ll sit pretty poorly with my liberal friends, but hey, most everyone knows I’m a conservative. If not, they do now.

Up in my former home state of Maine, voters are today deciding on whether to overturn their law allowing same-sex marriages. I sincerely hope that Maine’s voters vote “No” on ballot question 1 and keep marriage equality for all Mainers. I’m sure that’ll sit poorly with my conservative friends, but hey, everyone knows I’m okay with gay marriage.

Does this make me gay? Not hardly. I’m a devout heterosexual who happens to have gay friends and supports those same friends. You don’t catch the Gay Cooties, and hanging out with homosexual friends doesn’t turn you gay. That’s absurd. Just because a cat has kittens in the oven, that don’t make ‘em biscuits.

Does this make me Anti-Marriage? Not at all. That’s also absurd. I’m such a fan of marriage that I’ve done it twice. Didn’t quite get it right the first time, but I’m rather enjoying it the second time around.

Does this make me Anti-Family? No. I have a family, so how can I be against families?
Does this make me Anti-Christian? Possibly. I’m not gonna start stoning you in the street or beheading you on streaming internet though. I would prefer to say I’m more along the lines of Anti-Forcing-Your-Religious-Views-On-Everyone-By-Saying-God-Will-Send-You-To-Hell.

Face it, good Christians; with one face you espouse this notion of forging a personal relationship with God and that this Christian God is loving and forgiving and understanding and all-knowing and infallible, and with the other face you tell people that God hates them and they’re going to Hell.

Mmmm’kay…did the Lord whisper this in your ear via a burning bush that these people were hated? I mean sure, you interpret that from the book you like to thump about at your convenience, but hey, aren’t there verses in there too that could be interpreted as promoting slavery, too?

If God created these gay people, why wouldn’t He love His creations? Why would God hate something He created? Seems silly to create something you know you’ll hate, no?
And about that “personal relationship with God”? If homosexuality is so sinful that it earns you a ticket to Hell, then really shouldn’t that be between God and the gays themselves? Why do YOU have to mediate? Their salvation or lack thereof is between them and their chosen deity. You, as a mere mortal human, cannot bestow salvation or damnation upon anyone’s soul so stay out of it. To think otherwise, to think that you have the right to keep two consenting adults from declaring their love and receiving the same rights, privileges, and burdens that heterosexuals enjoy by mere virtue DNA programming, is folly. One could even argue that it is sinful, in that in your own prideful conceit you have the right to judge and thus withhold from another the right to marry.

Here’s a clue: they’ll still be gay whether you let them marry or not. Next you’ll be establishing Gay Gulags for forced hetero reprogramming or extermination should they fail to be what you want them to be.

And, to summarize, here’s a paraphrase of something my friend Wil wrote today on Facebook:
“A man who is notorious for cheating on his wife was featured on TV in front of a Catholic church (rallying) to Protect Marriage. Check your closet for skeletons before making such a stand. Marriage involves a lot more than just two people being married. It involves love, honor, compassion, equality & trust. That's grounds for ex-communication from the Catholic Church as well. And as a former Catholic, I can promise that Jesus Christ would never condone the use of his words or his Father's words as a way to judge, belittle, and/or segregate people. Shame on you! All you need is love!”
Posted by Steve: The Lightning Man at 11/03/2009 09:20:00 PM

You, my friend, and brother in arms, are one of my heroes. I mean that from the bottom of my heart! Thank you for spreading YOUR good word. You are a gentleman and a scholar. Keep writing, venting and doing what you do.

Great post! Everyone should be free to be pursue happiness. Just as long as they keep paying their taxes (ha ha)......

You know, two gay men who have been together for 20 years is not going to destroy my marriage. The only people capable of destroying my marriage are me and/or my husband.

I'm not a big opponent of gay marriage, I just don't take up arms against it.

But there were a couple of points in your post I wanted to disagree with.

You said "with the other face you tell people that God hates them and they’re going to Hell." No, God hates their actions. He loves them. Their choice to ignore Him sends them to hell.

"aren’t there verses in there too that could be interpreted as promoting slavery, too?" No. There are verses that tell slaves how to behave. They can be interpreted to people in a work environment (they apply to me I know). But they don't promote slavery.

"If God created these gay people, why wouldn’t He love His creations?" - As said earlier, He loves them. Would you use the same argument about alocholics? Shouldn't they be allowed to kill themselves and those around them? No, the actions are what is hated and He gives us the choice.