America in the grips of NIMBY Syndrome

And we’re off to the rodeo…

Barely three days into the Obama presidency, and the un-Bushing of America has begun. President Obama has suspended the ongoing trials of terrorists being held at Guantanamo Bay and declared that the facility will itself be closed a year from now.

Well, okay. This just begs the question: What the hell are we gonna do with our Muslim cousins being held in stasis for trying to kill us all? Do we just set the buggers loose to go back to setting off truck bombs and flying airliners into skyscrapers? Or do we simply house them elsewhere, moving the operation to another exotic overseas locale? Barring that, do we just ship the sunzabitches stateside to some secure facility here?

You send them overseas to somewhere else, and you run into the problem of security and trustworthiness of the host nation’s government and general populace. Certain of our supposed allies I wouldn’t trust to co-sponsor a frikkin’ bake sale with us, let alone hold onto our most dire enemies without letting them loose “accidentally” to rejoin their brethren.And you know they will.

A Saudi man who was released from Guantanamo after spending six years inside the camp has joined Al Qaeda's branch in Yemen and is now the terror group's No. 2 in the country, according to a purported Internet statement from Al Qaeda. Documents released by the U.S. Defense Department show that Ali al-Shihri was released from the facility at Guantanamo Bay, Cuba in November 2007 and transferred to his homeland. The documents confirmed his prisoner number was 372. An alleged travel coordinator for Al Qaeda, Al-Shihri allegedly traveled to Afghanistan two weeks after the Sept. 11 attacks, provided money to other fighters and trained at an urban warfare at a camp north of Kabul. Seems that once you let the little turds go, they trot right back to Bad Guy Land and do Bad Shit all over again. So, setting up shop again overseas is definitely problematic.

The bigger problem though is America’s steadfast adherence to NIMBY. That means Not In My Back Yard, as in, go ahead and build what we need, just not near me. Sure, a landfill? Great, but I don’t want it in my back yard. A nuclear waste dump? Not in my back yard. Three hundred sworn enemies of America who want to kill us all? Sure, put ‘em in jail, but not in my back yard.

Everyone wants ‘em put away, but no one wants the facility anywhere near themselves. I even heard one erstwhile genius exclaim, “Put them over on Alcatraz. No one escaped there.” Great, Einstein. An abandoned jail that closed in 1961, where several buildings are fire-damaged and everything’s suffered 75 years of salt water damage.

So far the only guy who said to put them in his back yard is Representative Jack Murtha, the Pennsylvania Democrat who chairs the defense subcommittee for appropriations, renowned for his ability to steer earmarked dollars to his district. He’s looking at this as an opportunity to snag an instant stimulus package of jobs and federal money to build a new prison in his district, since all of his local prisons are already full and his voter base needs jobs.

A stream of congress members and senators voiced concerns about where the detainees would go. Senator Sam Brownback (R-KS), said he's been "pleading" with Obama's staff not to bring them to Fort Leavenworth in his home state -- something he believes is being considered. Leavenworth is a multi-prison complex comprising a federal penitentiary and the military’s Disciplinary Barracks. 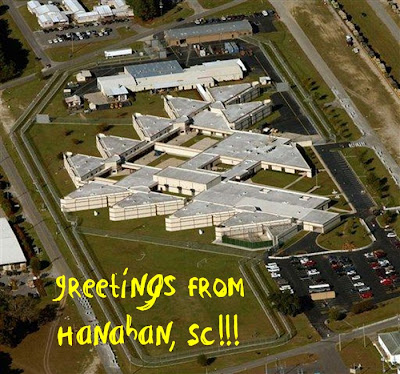 
Locally, our own Congress-creatures are pissing and moaning the NIMBY argument too. I’m honestly not sure if they aren’t doing it just to toe the Republican Party line and balk at Obama’s policy or if they just figure that NIMBY will keep them in office. See, one of the facilities being discussed other than Leavenworth is our own Consolidated Naval Brig over in the Charleston suburb of Hanahan. Representative Brown said he hasn't been briefed on any plans to close the facility at Gitmo, but he questioned the need to make a change. Brown said he isn't worried so much about escapees but rather about how their presence would make Hanahan and the surrounding areas more of a potential target. Also, it could require security upgrades that could inconvenience people who live or work nearby. Senator Jim DeMint sent out a press release warning the move would endanger Americans. "And if the new administration tries to move these known terrorists to South Carolina, they should be ready for a fight," he wrote.

Brown said he hasn't heard much feedback on the issue. "I think once people focus on it," he said, "…they'll realize that's something they would not like to see in their neighborhood."

And that proves my point.

People, the federal government owns those prisons, regardless of what state they happen to be in. And if they wanna house federal prisoners in their federal prisons, suck it up and deal with it. The brig in Hanahan held convicted terrorist Jose Padilla, who is now is the ADX Supermax Prison in Colorado, for over three years quite safely & securely. It currently houses Ali Saleh Al-Mirri, a purported enemy combatant who allegedly was tapped by 9/11 mastermind Khalid Sheihk Mohammed to plan more attacks in the Los Angeles area. Al-Mirri has been a guest of Lowcountry hospitality for six years, and 99% of you had no idea he was even here.

Several of my friends are current or former cage-kickers; i.e.: military correctional specialists. I myself worked at an Army correctional facility for two years. Do you people have so little faith in the soldiers and Marines who keep these prisons secure? Personally, I have implicit faith in the professionalism and ability of the men & women of our military’s correctional units to keep 245 dirtbags under wraps.

Hell, we could always send them to Maricopa County, Arizona. Sheriff Joe Arpaio is known worldwide as the toughest sheriff in America. He houses inmates in a rudimentary tent city in the desert, only feeds them twice a day (bologna sandwiches. I kid you not. He says it costs 40 cents a day to feed an inmate, and it costs $1.40 a day to feed a guard dog) and makes the inmates wear pink undies. Then again, would it be such a hardship for these assclowns to be held in the desert after half of them have spent a lifetime in Arab deserts or living in caves?
Go ahead and close Gitmo. It never should have been opened in the first place, because those cretins should have been shot on sight as vermin instead of sucking up taxpayer dollars to give them 3 hots & a cot, a new Koran and a new prayer rug, and all they have to do it sit on a tropical island and talk to Allah. 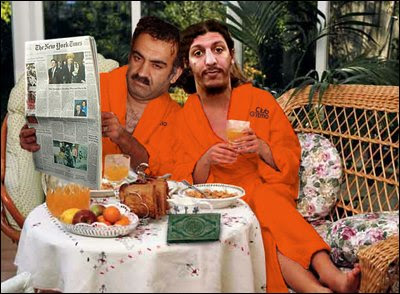