What's a little torture among friends? 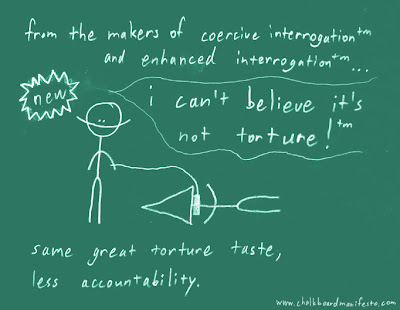 Attorney General-nominee Eric Holder Jr. declared Thursday that waterboarding is torture, forcefully breaking from years in which the Justice Department deftly avoided the sensitive question about U.S. interrogation methods. It was the latest signal that Barack Obama plans a sharp 180 degree turn from the Bush administration. As recently as last week, Vice President Dick Cheney defended waterboarding, saying it provided valuable intelligence. The CIA has used the tactic on at least three terrorism suspects, including alleged 9/11 mastermind Khalid Sheikh Mohammed.

Holder reiterated Obama's promise to close the detention center at Guantanamo Bay but said doing so would be difficult. Many detainees could be transferred to other countries, he said, and some could be charged in U.S. courts. The big question, however, is what to do with dangerous terrorism suspects who cannot be charged in civilian courts.

"We're going to have to try to figure out what we do with them," Holder said.

Well, no shit there, sunshine. That’s an obvious understatement. What countries are gonna want to take these assholes in? It’s the hottest potato on the planet. It verily invites ill will from terrorist organizations and even some of our staunchest allies can be complete jellybacks when dealing with Islam. (Yes, England, I’m talking about you, and your constant acquiescing to Muslims.)

You know what? I don’t care if they close Gitmo. It’d save us millions of dollars in operating expenses, and in fact those scumbags never should have made it to Gitmo in the first place. They should have been shot on sight, or quickly interrogated by any and all available means, and then killed on pay-per-view, with proceeds going to fund the war on terror.

Is waterboarding torture? Maybe. But it’s about the most innocuous form there is. You strap a dude down, and pour water up his nose so he feels like he’s drowning. Yeah, I know, it sounds nasty and I wouldn’t want it done to me. Panic sets in and most people break pretty quickly. In March 2007, after four years in captivity, including six months of detention at Guantanamo Bay, Khalid Sheikh Mohammed confessed to masterminding the September 11th attacks, the Richard Reid shoe bombing attempt to blow up an airliner over the Atlantic Ocean, the Bali nightclub bombing in Indonesia, the 1993 World Trade Center bombing and various foiled attacks. He is also thought to have had, or has confessed to, a role in many of the most significant terrorist plots over the last twenty years, the Operation Bojinka plot, an aborted 2002 attack on Los Angeles' U.S. Bank Tower, the failed bombing of American Airlines Flight 63, the Millennium Plot, and the murder of Daniel Pearl. I heard Mohammed broke in under 90 seconds; some say 3 minutes. The number two guy in Al Qaeda broke in less time than it takes for me to enjoy a dump. Hell yes. 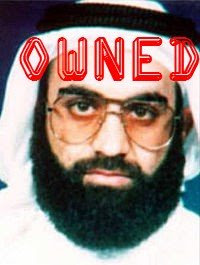 Riddle me this, dear reader. If we have a terrorist in custody, and he has information that relates to preventing an attack on our country, isn’t it imperative that we find out about it post-haste? Now just imagine if the attack was to be on a school…your kid’s school…your child is at risk of being blown up, or shot, or raped and then shot, and this one guy can talk and prevent your precious child from a horrible death…would you then say that we can’t trickle some water up this dude’s nose to find out how to stop your baby from dying?

I’d turn that faucet on myself, and keep it flowing till my loved one was safe. And you know what? You’d do the same damned thing. Don’t bullshit me and say that you wouldn’t. If you can sit there and say “Boo hoo, we can’t waterboard that man because it violates his rights and if my baby has to die to secure his rights than so be it…”, then you’re seriously one sorry bastard and I pity your kids for having a spineless parent who wouldn’t defend their lives to the fullest.

As a military police soldier I had an opportunity once to participate in a fascinating 3-week training exercise involving units performing their wartime missions, units including the 10th Special Forces Group and the 511th Military Intelligence Battalion. My own unit was operating a mock prisoner-of-war camp, and I guarded the “prisoners” during lifelike interrogation sessions, mostly done in other languages. There was a lot of sleep deprivation and yelling and the occasional solitary-light-bulb-in-a-darkened-tent scenario stuff. I was cool with it, because I know damned well that if I were to ever be captured, that unfriendly forces would do a lot worse than wake me up every couple hours and scream at me.

I loved the fact that we parked our asses in front of the Vatican Embassy in Panama blaring music at enormously loud levels all day & night until Noriega gave up. We still play loud raucous music to disturb the guys at Gitmo, and if I were a musician I’d be stoked to have my stuff being played to help break down the will of terrorists, instead of bitching about it like Trent Reznor, who needs to grow up a little and realize that if he insists on making loud angry music, it can help the common good rather than just lining his wallet with crisp green paper.

Oh, and by the way, Liberal America, water drizzles and loud music are a far cry from what goes on in other countries…and the Rendition Policy of moving prisoners without due legal process to countries without strict human rights protections, or more rather outsourcing interrogations to third-party nations, was pioneered not by GW-Bush, but by his predecessor, your hero, Bill Clinton. Gosh, we can’t torture these fellows, so let’s contract Egypt to interrogate them for us….or let’s get it done in Morocco or Saudi Arabia, or Jordan. Don’t blame Bush…Slick Willy did it first, as early as 1995.

Do I condone torture as a general rule? No. I’m not a frikkin’ sadist. I’m not talking about taping electrodes to someone’s genitalia and flipping the switch. I’m not talking about repeated bludgeoning with a short length of rubber tubing from the Lawn & Garden aisle at Ace Hardware. I’m not talking about bamboo slivers up the fingernail beds. I’m talking about giving someone the sensation of drowning for a short while until such a time as they opt to divulge useful intelligence of terrorist activities that endanger free societies around the globe. 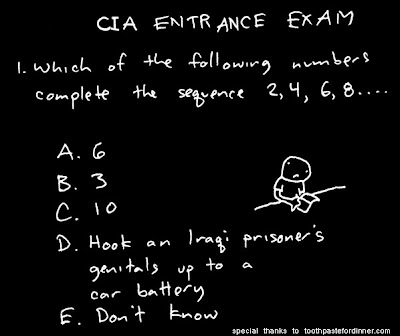 Unfortunately, I agree with everything you said.


I say unfortunately, because I wish there was a better way. If there is, I can't see it. We should continue to look for a better, more humane way to handle terrorists. But until we do, we should continue to use every method possible to get all the information possible from them before we killl them. And God help us if we're wrong.

Terrorists: Let's see what to do with them. I say torture the crap out of them until they give us what we want, and depending on whether they have murdered, or not will determine if they are executed, or live forever in a prison. Hey if you don't want to be tortured then don't be a terrorist! Simple enough!

By the way, same thing goes for sexual predators too!