Shootout at the Valero-K Corral 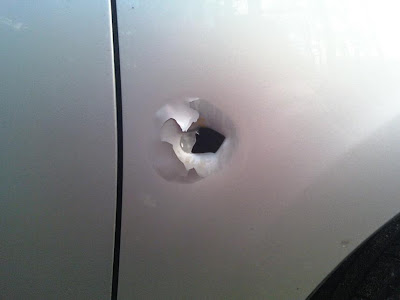 Yeah, that's our car. Three payments made and already ventilated.


A while ago, I thought it was somewhat amusing that you could buy stickers to adorn your car with that looked like bullet holes. They look tacky on an actual car no matter how cute it seems in the packages, but I’m not really amused by them anymore. No, not now that I have an actual bullet hole in my wife’s car.

Without going into too much detail, since it’s all still an open case and all, but if you want, go here: http://www.ctdispatch.com/?p=2501 for the first story that came out about it, although there was a seventh arrest not mentioned in that article. Half the people arrested were juveniles. The short form of the story is that on Tuesday night, filling up with gas, we got caught up in the middle of a dispute between two supposed adults who have had a beef with each other since middle school, shots were fired, and like the good Military Police soldier that I used to be, I had my driver un-ass the A.O. most rikki-tick. (Translation: we got the hell out of there.) See, I was taught that when you encounter a sniper/ambush, drive through it instead of stopping in the kill zone like a good little target and becoming a casualty. Once clear, you then flank the enemy & mount a counter attack. Since I don’t have my concealed-carry permit yet and my trusty .45 was at home like a good, legal handgun, the option of self-defense and return fire was not available.

Later on, we discovered a pretty good-sized bullet hole in the front right quarterpanel of the car, where a round sprayed blindly by some assclown had hit on an oblique angle and shattered against the wheel-well splashguard, missing the tire, and more importantly missing my right kneecap by about 8 inches.

It’s awkward enough calling your insurance company on a busted windshield, deer hit, or a fender-bender. Imagine how awkward it is to call your insurance company with a claim over this? It’s not like every day you get a claim for small-arms fire. I don’t live on the Gaza Strip or in downtown Fallujah. I thought I lived in a quiet sub-rural town. Many states, ours included, mandate free glass replacement coverage in their insurance coverage due to a constancy of need (Hell, we went through three windshields last year) but stray small arms fire seldom occurs around my vehicle. I mean, I don’t carpool with Plaxico Burress, Suge Knight, or Dick Cheney.

I’m grateful that we’re both safe, and that the damage isn’t any worse than it is. But the damage to our piece of mind will take a little while to repair. 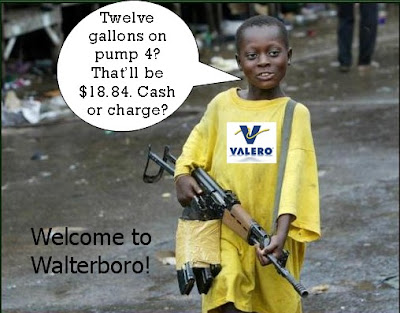 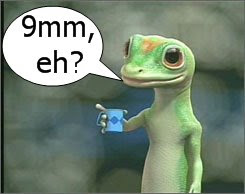 Glad you're all safe. Looks like a big hole.

You used the Gecko as one of your pics, do you use that insurance or a different company? Just curious..