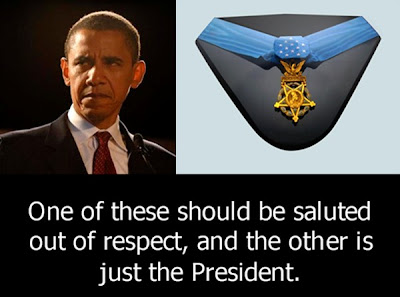 Somehow I managed to miss this one on International Day of Change, or as you people called it, Inauguration Day. The newly coronated Messiah President opted not to appear at what should have been one of the most important Balls on his agenda that evening, and that was The Salute to Heroes Inaugural Ball.

The Salute to Heroes Inaugural Ball was begun in 1953 for President Dwight Eisenhower's inauguration. The event recognized recipients of the Medal of Honor, the nation's highest military award. There were 48 Medal of Honor recipients in attendance, who were undoubtedly disappointed by the Commander-in-Chief's failure to show. Over the past 56 years and 14 inaugurations, no President has ever out on skipped this event - until now. As most of the medals are awarded posthumously, to have 48 recipients in attendance was a rather amazing thing.

The ball is sponsored by the American Legion, and co-sponsored by 13 other veteran's service organizations, including those such as the Paralyzed Veterans of America and the Military Order of the Purple Heart. You know… the people who keep America free so that politicians can run amok.

Instead of attending this ball honoring our nation's heroes, Obama was busy making stops at 10 other official balls. Obama and his wife's first stop was the Neighborhood Ball. From there they went to the Home State Ball for Illinois and Hawaii, the Commander-in-Chief Ball, the Youth Inaugural Ball, and the Home State Ball for Delaware and Pennsylvania. They finished off the night with brief appearances at the Mid-Atlantic, Western, Midwest, Eastern, and Southern regional Balls.

Celebrities were a plenty at the balls, with Stevie Wonder, Shakira, Mary. J. Blige, Faith Hill, Beyonce, Jay-Z, Alicia Keys, Adam Levine, will. i. am, Sting, Mariah Carey, Ray Romano, Jamie Foxx, Vanessa Williams, Queen Latifah, and Leonardo DiCaprio in attendance at the Neighborhood Ball. In addition, the other nine balls also featured a star-studded lineup including Kanye West and Kid Rock at the Youth Ball, Marc Anthony at the Western Ball, and Cheryl Crow at the Western Ball.

Young Jeezy and Jay-Z’s freestyle rap about the Bush Administration at a concert the night before the inaugural was simply inspirational poetry indeed. Proud Americans...


Oh yeah. His Obamaness was at the parties with all the celebrities and Beautiful People. It was the party without all of the celebrities that Obama skipped. The very people who he sought to have support him during his candidacy and campaign, who have fought to protect this country, were snubbed in favor of publicity and the opportunity to rub shoulders with the Hollywood elite.