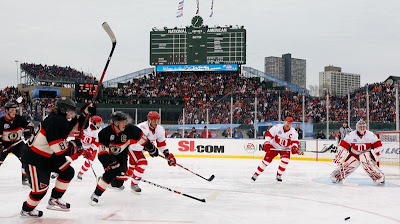 The Chicago Blackhawks, led by Captain Jonathan Toews, roll in on the puck in the Detroit Red Wings' defensive zone.

And another Winter Classic is in the can…

If it’s January 1st, then it must be time again for the NHL to play the now-annual Winter Classic, a hockey game played the old-fashioned way: outside. Almost every pro hockey player grew up spending their winters out on a frozen pond or a home-made backyard rink, and excitement over the opportunity to play in the Winter Classic is huge among players and tickets come at a premium for the fans.

Last year, over 72,000 fans packed the stands of Ralph Wilson Stadium in Buffalo to watch the Pittsburgh Penguins win over the hometown Sabres in a dramatic shootout. There was snow, sleet, wind, and temps in the low 20’s, and fans ate it up.

This year, the game was hosted by the Chicago Blackhawks at Wrigley Field against the defending Stanley Cup champions, the Detroit Red Wings. As an homage to hockey’s roots, the teams wear vintage-design throwback jerseys. The Wings wore sweaters with a design from 1926, their first year in the NHL, when they were known as the Detroit Cougars. The ‘Hawks wore black sweaters combining designs from their 1936-37 and ’37-‘38 seasons.

There was talk of holding the game at Soldier Field, but the Chicago Bears bitched about it because there was a chance that they might need the stadium to play a playoff game 3 days later and there’d a be a hassle in getting all the specialized equipment and miscellaneous gear out of the arena in time to prepare the field for football. Wishful thinking won out when the decision was made back in July to hold the game at Wrigley. The Bears didn’t make the playoffs, and the Blackhawks were 9-1 in their last 10 starts before today’s puck drop. This limited attendance at the game to just under 41,000 fans. 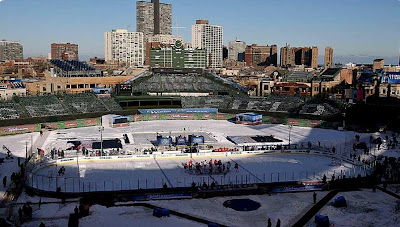 Putting the rink together at Wrigley Field

At the end of the first period, Chicago led 3-1. After that, it was pretty much all Detroit as the Wings scored five in a row over the next two periods. Down by three with ten seconds left, Chicago’s Duncan Keith scored to make the final 6-4, a slightly less painful loss for the home team but a loss nonetheless.

This year the big sponsor was Bridgestone; last year it was Amp Energy. No word yet has been leaked on next year’s matchup, but I have a couple ideas. Hockey is a Canadian invention, and it’s only fitting that a game be hosted in the Great White North. The precursor to the Winter Classic was the November 2003 Heritage Classic, which featured the Montreal Canadiens playing against the Oilers in Edmonton in front of 57,000 hardy souls. Perhaps this is why Montreal was overlooked for this year’s game despite the Habs’ celebrating their one hundredth year as a hockey franchise. I think a Toronto-Montreal game would go over like gangbusters, but I have a feeling that it could very well be a Toronto game against the New York Rangers instead. It needs to be hosted in Canada again to keep things fair to Canadian fans, but I really want to see the Bruins host a game at Fenway Park (because you know that Patriots ain’t gonna let anyone use that stadium during the playoffs…oh, wait; the Pats are currently done for the year, too…).

Notable players at today’s game included Detroit’s Father Time, Chris Chelios, playing in what may have been his 9 millionth NHL game. Actually, the league’s oldest player (he’ll be 47 in about 3 weeks) is in his 25th season, tying Mark Messier as second only to the great Gordie Howe for the most NHL seasons in a career. A Chicago native, Chelios is also a former Blackhawk. Also playing for the Red Wings was goalie Ty Conklin, who played netminder for last year’s Winter Classic winners, the Pittsburgh Penguins. Conklin also played in net for the Edmonton Oilers for the Heritage Classic, making him the only NHL player to have played in all three recent outdoor games.

I can’t think of a better way to start the New Year than to watch hockey in its natural surroundings. After floundering for a few years, I’m glad to see the NHL doing it right. 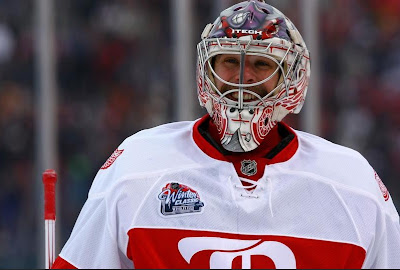