If it's not Scottish, it's crap! 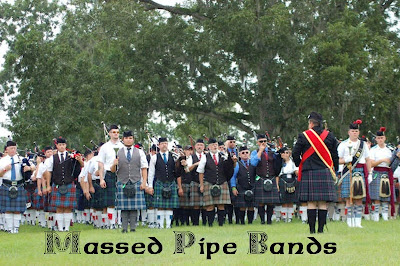 Yesterday the missus and I attended the 38th annual Charleston Scottish Games & Highland Gathering, something we’ve done every year since we first met. But I always get the question of “What’s a Scottish Games?”… so I guess I should answer it.

Each year there are hundreds of Games/Highland Gatherings around the country, in every state of the Union. Many of the largest events are right here in the South, due to having such decent weather and from having such large populations of people with Celtic heritage. Think of it as a big party for folks of Scottish ancestry, but bringing in Irish & English folks as well. The Irish have their St. Patrick’s Day, and in Charleston, the Scots have their big to-do six months later.

The Games in Charleston are held every year the third weekend in September, which almost always puts it halfway to Saint Paddy’s, and are held over at the gorgeous & historic Boone Hall Plantation. There’s bagpipe bands, tents galore for each Scots Clan in attendance (a Clan is a family group), piping & drumming competitions, Highland dancing competitions, Celtic musicians, border collie demonstrations, educational displays about Scots history, and lots of vendors with Celtic regalia, clothing, leather goods, iron work, jewelry, foods, and even bagpipe supplies.

There’s a few thousand men in kilts roaming the grounds, including me. Don’t have a kilt? You can order one from folks right there. There’s usually two or three vendors there who do made-to-order kilts, generally delivered in about 8 weeks. (I’m hoping to get a new one next spring!) 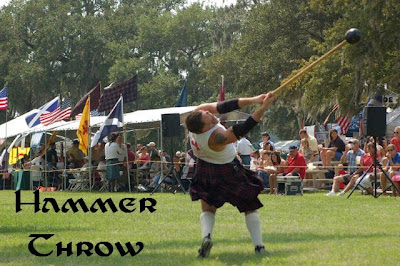 But the Games…what about the Games? Usually “Games” refers to the whole event, but actually the Games themselves are competitions in the events known as Scottish Heavy Athletics. Picture insanely burly men in kilts performing feats of strength such as the Weight For Height (a 56-pound iron weight tossed with one hand over a raised bar) the Sheaf Toss (using a pitch fork to heave a 20-pound hay bale over a raised bar twice the height of the WfH), the Hammer Throw (16 or 20-pounds), Putting the Stone (like the Olympic shot put), and the one most everyone associates with Scottish Games, the caber toss….

The Caber Toss is what most folks refer to as “throwing the telephone pole”. Athletes will fling a slightly tapered pole, on average 18 feet long and about 110 pounds. The athlete will hoist the caber, so that the bottom of the pole is about level with his elbows, cup the smaller, tapered end of the pole in his palms, and balance its weight against the shoulder. After a running start the athlete will push upward and out, away from the shoulders. The intention is to flip the pole, with the larger end of the caber hitting the ground, so that the pole lands in a straight line perpendicular to the shoulders, being scored like a clock. A 12 o’clock is a perfect score. 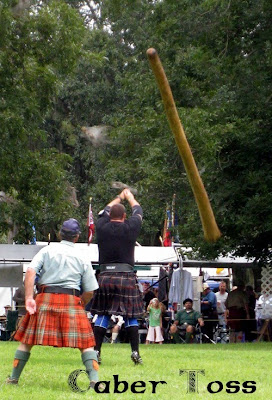 Tossing the caber, photo from Chuck at www.chuckography.blogspot.com

The Games take on a special meaning for my wife and I, as that’s where we got married in 2005. Seriously. It was a great way to have a Scots-themed wedding, and at historic Boone Hall Plantation (not a cheap place to rent for weddings whatsoever), surrounded by friends and family and thousands of happy festive people in kilts with bagpipes aplenty. We started dating on St. Patrick's Day in 2003, so we actually do an anniversary every six months. Also, my wife was a huge fan of Patrick Swayze; his miniseries “North and South” was partially filmed there, and the opening scenes were filmed a mere few feet from where we took our vows. Of course, she had to have her wee moment of silence for him Saturday. 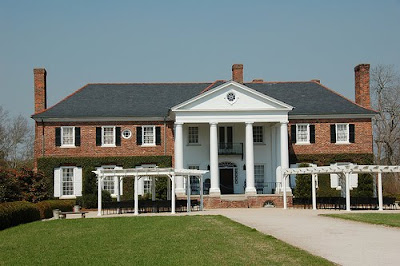 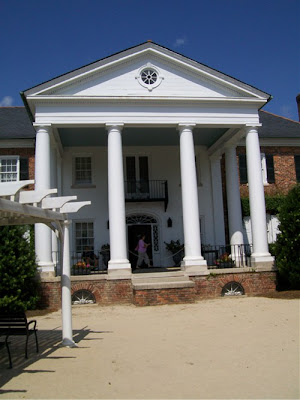 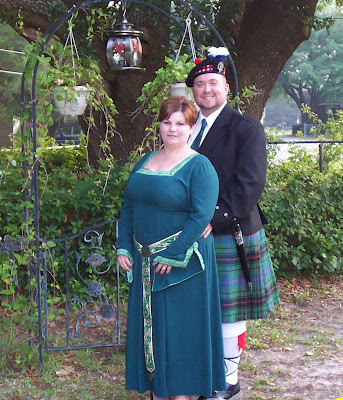 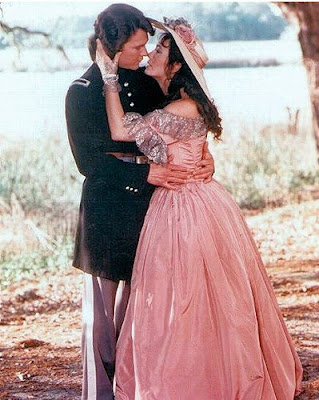 We got married right in front of the mansion at Boone Hall. Good enough for Orry Main, good enough for us. And yeah, that's us 4 years ago, in our wedding gear.

So yesterday I got to wear my kilt, see some old friends, hear the pipes, eat some haggis, celebrate my anniversary, and bought some new t-shirts. Even the weather held out; there’d been a 50% chance of rain, and it was sunny and upper 80’s all day. All in all, it was a great time. I'll probably write more about it during the week.

Looking for a Games near you? Go to http://www.asgf.org/ or http://www.cosca.net/ for a listing. 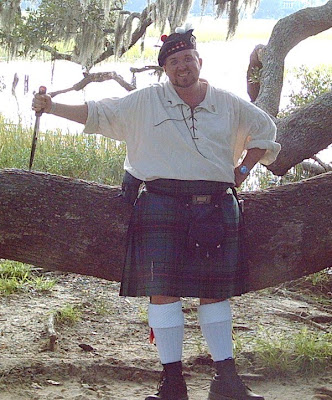 Awesome. We like the Highland games in Jackson (LA). It's small but 'concentrated Scottish fun'.

That Caber Toss would likely kill a gut like me. That's one big chunk o' wood you're throwing around out there!

the best scot joke ever; why do scots wear kilts? cause the sheep can hear a zipper from a mile away.
jen's macdonald and i'm campbell.
happy anniversary.

I've been to Games large & small in lotsa places, from the massive Grandfather Mountain Games to the rather modest Clover Games, and the intimate venues can be just as much fun. I've also had it be 50 and windy in March and sweltering 97 and humid in September.

And to clarify: I am not a Games athlete, merely a spectator. I may be a burly lad, but I'm not quite ready to fling logs just yet.

Sounds like a great time. Glad you had fun! :-)

I gotta say... those are good knees for a kilt. Weaker looking knees would give away the whole game.

I don't wanna get all weepy but you two make a beautiful couple. This was a great read, beautiful pictures.

Happy Belated Anniversary to you and the missus! Lurvly pics! Hope you had enough haggis at that bash.

I'm glad you had such a good time. Scottish games are fun to watch!

You and the missus make quite a pair! :)

My unsquelchable penchant for men in kilts just reared its randy head after reading your blog entry!