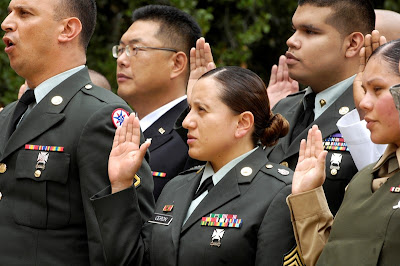 SGT Maria Ceron, US Army, takes the oath of citizenship on Thursday.

It’s not a very well-known fact, but the United States allows certain individuals who are American residents but not American citizens to enlist in the various branches of the armed services. They serve, they fight, they sometimes die for a country that isn’t quite theirs, and I find that admirable and amazing. And just because they serve and fight, that doesn’t automatically confer upon them US citizenship, but does make them automatically eligible now since 2002. I had two uncles who served in Vietnam as Canadian citizens in the US Army, and both have since passed away from natural causes. Both were given full military funerals by the Army, and both were still Canadian citizens when they died. They never went ahead and got their citizenship for some personal reason or other. My mother was finally naturalized in 1995; I helped her study for her citizenship test.

The following is an article from the Defense Department’s own website that I wanted to share with you, by John J. Kruzel, of the American Forces Press Service, and the photos are courtesy of PO1 Molly Burgess, US Navy.


WASHINGTON, Sept. 10, 2009 – Marine Sgt. Tikonblah Dargbeh is like the tens of thousands of other troops who have served in Iraq as a U.S. military member, save for one major distinction: until today, Dargbeh was not American.

But his national status changed when Dargbeh, a native of Liberia, and 30 other foreign-born U.S. military members officially became American citizens today at a naturalization ceremony at the Pentagon.

“Represented here are immigrants from 20 different nations, on five continents,” Defense Secretary Robert M. Gates told the crowd gathered in the building’s center courtyard. “It is one of the true glories of our country that, when it comes to being an American, you don’t have to be a descendant of the founders or the colonists who came over on the Mayflower.”

Since Sept. 11, 2001, more than 50,000 men and women have become citizens while wearing the uniform of the U.S. military, said Gates, adding that more than a hundred of these newly-naturalized citizens have died in action.

Gates called it fitting that in accordance with a 2002 executive order, immigrants who serve on active duty become immediately eligible for U.S. citizenship, which often represents an expedited path for foreign-born servicemembers to become Americans.

“This nation that welcomes you with warmth and with pride is very much in your debt, because you have shown your love for this country in the most honorable way possible,” he said. “So on behalf of the Department of Defense, I thank you for defending the people of the United States – your people – and the ‘self-evident truths’ which they hold so dear.”

Gates’ fellow cabinet member Janet Napolitano, the secretary of Homeland Security, led the group in reciting the Oath of Allegiance to the U.S. Constitution.

In various accents of English, the immigrants repeated each clause of the oath. Together, they renounced “fidelity to any foreign prince, potentate, state, or sovereignty,” vowed to support and defend the U.S. Constitution and the nation’s laws, promised to serve at the will of the nation, and pledged they were assuming their duties “without any mental reservation or purpose of evasion.”

None better illustrates the idea of sacrifice on behalf of the United States than Dargbeh. The Liberian native, whose father instilled in him the belief that America represented greater opportunity to excel, enlisted in the Marines and twice deployed to Iraq.

During his tour in Karmah, Iraq, in 2007, Dargbeh and his Marine unit prepared for a nearby mission. Dargbeh, a machine gunner, sat in the back of a 7-ton Mac armored vehicle, clutching his weapon.

Moments later, the vehicle was rear-ended by a car packed with explosives.

“We were going to go do a raid at another village. I was trying to put my weapon from ‘safety’ to ‘semi-automatic’ and that’s the last thing I remember,” Dargbeh said. “The next thing I know, I was at a medical facility.”

As a result, Dargbeh received a Purple Heart for suffering injuries at the hands of an enemy on behalf of the United States – a country that wasn’t even his own at the time. When asked if he feels his military service has helped him earn his U.S. citizenship, he replied, “I think so, yes.”

“I understand what it means to give selfless service [to the U.S.],” he said.

After the ceremony, Dargbeh’s exuberant family showered the Marine with praise and posed next to him in photographs.

“I’m overjoyed,” said the Marine’s mother, Marta. “As a little kid, he had always loved the military, so this is a dream come true for him to be able to get into the Marines and here he is a U.S. citizen. It’s a really big occasion for us. We are very proud of him.”

Another servicemember whose dream of becoming an American came after deployment with the U.S. military was Army Sgt. Maria Ceron.

In addition to defending a nation that she couldn’t yet call her own, Ceron, who served as a nurse in the Combat Support Hospital in Mosul, received two Army Commendation Medals.

“It’s a very happy day,” she said of today’s ceremony. “I’ve been trying to get my citizenship for three years and finally it’s come today and it’s so great it’s here. I’m just very excited about it.”

I’m sometimes exceptionally critical and rather harsh towards illegal immigrants on this site. I have no problem whatsoever with folks who come here legally, and contribute to society. I’m exceedingly proud of these 31 service members, for coming here the right way, and for serving our country honorably. Welcome, my brothers and sisters. We’re fellow veterans, and fellow Americans, and I salute you. 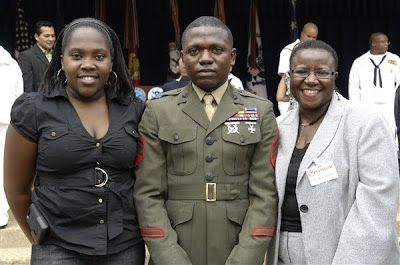 don't see any jumpwings, but the kids purple heart trumps them anyway.

there's a spec4 in the top pic with a purple heart also.

I'm glad to have them with us as well!

I haven't posted on the other posts, but I believe I am now caught up. :)