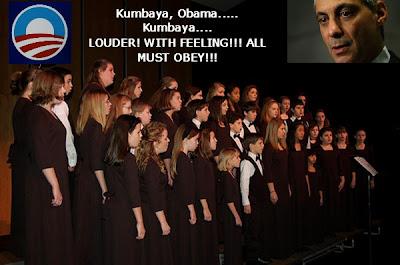 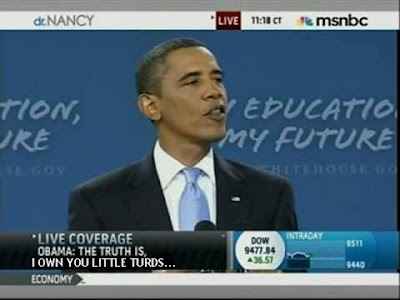 What with all the Fuhrer Furor over the NJ schoolkids singing their odes to The Obamessiah, I felt that mayhaps a new Obama Youth Anthem was in order.

Do away with tax relief
As he dines on Wagyu beef
Fly for pizza on Air Force One
Or Mecca’s Vineyard or some fun.

We must be strong in our fight
To vanquish our foes on the Right.
Back room deals have all been made.
Corporate bailouts, cap and trade.

Under a bus we shall push
Blame it all on Dubya Bush
Single payer health reform
Socialism is the norm.

While our soldiers fight and bleed
“The war is lost”, says Harry Reid
Unemployed ‘cause there’s no jobs
You’re just angry racist mobs.

Please don’t spend your welfare check
On those who advertise on Glenn Beck
He’s a hater filled with scorn
For the heroes at ACORN.

No black paint jobs on your cars
And no oversight on the Czars
Democrats have got your back
They’re “user fees”; it’s not a tax.

You’ll no longer be bereft
If you lean towards the Left
Hope and Change and all that’s good.
Serve Obama, yes you should.

All good children must obey
In Obama’s name we pray. 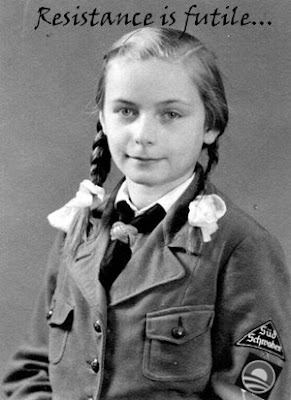 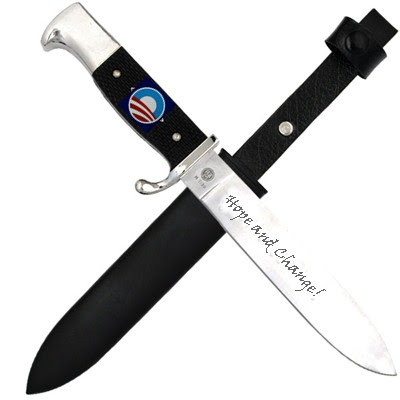 Too funny yet so sad. Great job. Carry on Patriot!

This would be funny if it weren't so frighteningly close to reality.

I had fun making the Obama Youth dagger...I also did a version in German....

Holy MACKERAL is that good! Or should I say what Mr. Z says "Heilige Mackerela!!" (smile)

Where's the piece like MINE? You mentioned that you'd written on that ZAZI puke..(0ops, sorry, but..)

fantastic. this is the creative ski i know and love. ohhh,if some of these folks knew how we used to rearrange lyrics in in the past! do a survey as to how many,(probably several) know what the words on the knife are supposed to be.

Steve! This song is awesome! You wrote that all yourself? You're a poet and now we all know it.
You should get a cam and sing it and post on youtube, I bet it would go viral! You could always wear a disguise if you didn't want to be ID'd!

An graphic artist and songwriter, and writer, your talents are Great.