Another American soldier was laid to rest, after 147 years. 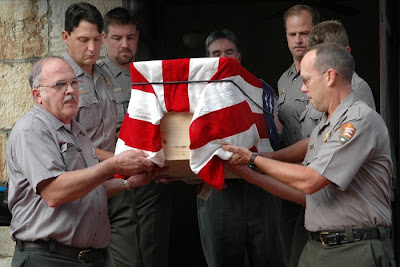 I hate it when I miss bringing you a good story in a timely manner. This story slipped right past me, and I just happened along it while skimming the stuff at the Department of Defense’s website, and an article by Air Force Senior Airman Jameel S. Moses.

After 147 years, another fallen American soldier finally gets his proper burial and honors. Rest in peace, my unknown brother.


SHARPSBURG, Md. (Sept. 17, 2009) -- The remains of a Union Civil War Soldier found at the Antietam National Battlefield here will be buried today in his home state of New York on the 147th anniversary of the battle, the Civil War's bloodiest day.

The remains of the Soldier, believed to be between 17 and 19 years old when he was killed, were transferred Sept. 15 from the Antietam National Cemetery Lodge to the Gerald B.H. Solomon Saratoga National Cemetery in Schuylerville, N.Y. He will be buried with full military honors.

"It is right and fitting that today's citizen-Soldiers from New York state bring home this unknown New York volunteer of the Civil War," Maj. Gen. Joseph J. Taluto, the New York adjutant general, said. "The Soldier's Creed reminds all American Soldiers that we never leave a fallen comrade behind. This is a way for Soldiers of today to care for a fallen comrade from our past."

The New York National Guard accepted the transfer of the Soldier's remains from the Maryland National Guard, which also conducted the honors ceremony at Antietam.

The remains were escorted by the Patriot Guard Riders Association for the 330-mile trip to the New York State Military Museum, where they lie in repose today with a military honor guard.

"The majority of the men who came here and were killed, did not have the opportunity to go back home," said J.W. Howard, superintendent of the Antietam National Battlefield and Antietam National Cemetery. "In our national cemetery, there are over 1,500 unknown graves and you do not know who these young men were, and yet you knew they came here and made this sacrifice. The idea of being able to send him home was something the entire staff stood behind. It was the right thing to do."

The Soldier's remains were discovered by a hiker from Oklahoma who was walking along the battlefield last October.

The hiker was walking on a trail running through the Miller cornfield, where the bloodiest fighting of the 12-hour battle occurred, Howard said. A pile of dirt that a groundhog had dug caught his eye. After a closer look, the hiker realized what he had stumbled upon.

The remains included more than 400 bone fragments from 24 different bones, seven coat buttons, two New York state cuff buttons from the left sleeve, six trouser buttons, a leather strap and a belt buckle. They were placed into a box made by a carpenter at Antietam from a walnut tree cut down on the battlefield.

The uniform items will be buried along with the Soldier.

"We consider this to be a part of his uniform he was wearing when he died," Howard said. "They should be buried with him."

Bagpipers escorted and piped in the casket to the somber tune, “Going Home”. It was fitting, since one of the regiments present at the Battle of Antietam was the 79th New York, famous for being the only American unit to ever wear Scottish kilts as their standard uniform. While the soldier’s true unit will likely never be known, it’s safe to say that he wasn’t from the 79th, as they fought closer to the town of Sharpsburg and this soldier’s remains were found in an area of the battlefield known as Miller's Cornfield, where the heaviest of the fighting occurred. There were sixteen different New York regiments at Antietam.

Nearly 23,000 casualties were suffered in a single day at Antietam, Union and Confederate both, Americans all. The Union suffered approximately 2.100 killed and 9,550 wounded, and the Confederates had 1,550 killed and 7,750 wounded. Another 1,770 from both sides were either captured or listed as missing. In general terms, casualties of Civil War battles included 20% dead and 80% wounded. Of the soldiers who were wounded, about one out of seven died from his wounds. Over 2/3 of the 622,000 men who gave their lives in the Civil War died from disease, not from battle.

The soldier was buried in a traditional 1860s pine casket, replete with U.S. Colors representing the 34 stars of the flag as a Union Soldier would have received in 1862. Now, for all time, he will rest at Section 7, Site 124 of the cemetery, given a special place of honor separate from the long rows of granite headstones marking more than 8,000 other graves at the Saratoga National Cemetery. "The majority of the men who came here and were killed did not have the opportunity to go back home," said John Howard, Superintendent of the Antietam National Battlefield and Antietam National Cemetery. "In our National Cemetery there are over 1,500 unknown graves and you do not know who these young men were, and yet you knew they came here and made this sacrifice. The idea of being able to send him home was something the entire staff stood behind. It was the right thing to do." 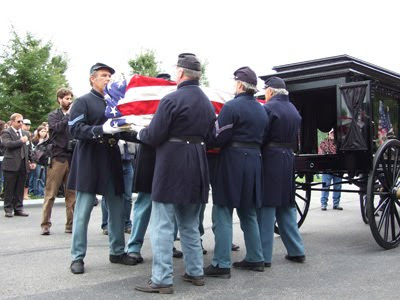 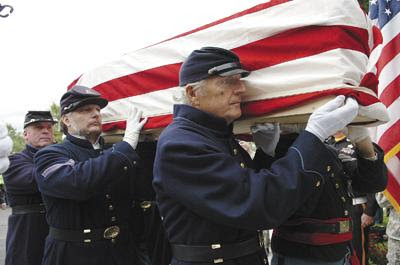 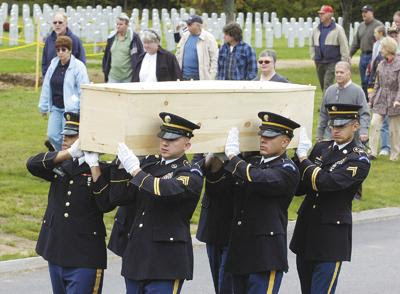 Sounds like God's providence, making it possible after all these years for the soldier to be laid to rest with a proper burial and honors.

That brought tears to my eyes. Thank-you for posting.

what an amazing thing...I got teary, too, Krystal.

Thanks for posting this, Lightning...what a really beautiful story and how wonderful to know how MUCH our military honors its dead. And how YOU honor him by posting this.
I loved it.....God bless that young boy's soul. And thank you for your service, SIR.

I just sent this link to about 20 email friends.
It's so wonderful.xxxx

Miller's Corn Field is where Stonewall Jackson joined the fight for the CSA. This young man had to stand against that!!! Civil War soldiers were extremely gallant and brave. God bless this young man who gave his all.

I've only been to Antietam once, when I was about 13 or so. I remember standing in Bloody Lane and feeling this tremendous sadness in the very air of the place, like the feeling I got when we used to regularly visit Gettysburg as a kid.

This was a fellow soldier. From the fact that his buttons were New York and not standardized Union Army Federal buttons, this means that he was issued his uniform rather early in the war. He volunteered at the beginning, and he faced his enemy and lost his life, and was buried where he fell instead of with the other unknowns in the site's cemetery. His body was off near some rocks and no one disinterred him, and no plows came near his resting place. If not for chance, he'd still be laying there today, lost to history. Now, he's back in New York where he came from.

Today's BEST honoring one of their own from a past war...Thank you for the post.....

May he rest in peace. Beautiful story.

Glad everyone enjoyed the story, and thanks for sharing -- it truly is an honor to be able to tell these stories and even more humbling when others enjoy them and share them in return.