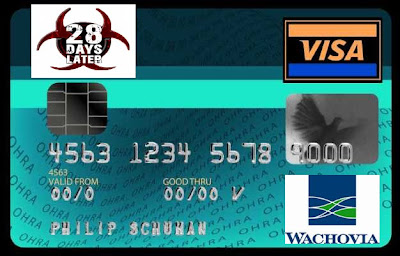 Back on Friday, August 24 I received the disturbing news that some scumbag had managed to get hold of my Visa debit card number and had used it to make some fraudulent charges that caused my account to be overdrawn for a day or two. Needless to say, I was bent. Beyond bent; I was livid.

I spent the better part of 30 minutes on the phone with a fraud manager at Wachovia, and this individual was quite helpful at the time. They cancelled my card and said they’d issue me a new one, and that I’d get it in 3-5 days. They also said they’d reimburse my account for any & all charges and that I should have the money back in my account by 0900 Saturday morning. Okay, cool… I may have to go without my bank card for a couple days but at least I’ll have my scratch back.

Sure enough, the money was there at 0900 Saturday morning as promised. And right after that is when the wheels fell off the train. After a week of waiting, Crys called Wachovia wondering where the card was. They said it would be 7-10 business days, not 3-5 days as I was originally told. Okayyyyyy…….factoring in the weekends and the Labor Day bank holiday, I was looking at two weeks without a card. Daily checking of a very empty mailbox ensues.

She called again, and they didn’t want to give any information because it was for my card, not hers. WTF? It’s a joint account. So she called again the next day, and this day's guy seemed all happy & jolly and said that we should have received the card since it had already been mailed out. He said he’d cancel that card and overnight us a new one……

Now, this is Thursday night when he says this, so the card would be overnighted on Friday. The day before the Scottish Games. Nobody’s gonna be home on Saturday, we say, so can you have it sent for Monday delivery? Suuuurrrrre…no problem, says he.
Posted by Steve: The Lightning Man at 9/22/2007 11:07:00 PM