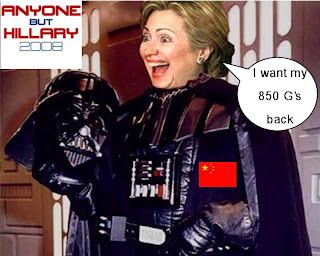 All the past couple weeks I’ve been hearing about how Hillary Clinton thinks her résumé makes her qualified to be President of the United States. What a crock. From what I can see, she’s qualified to be the disgruntled pseudo-wife of a career politician, qualified to look the other way to cover for his philandering, qualified to be embroiled in the shady Whitewater land deals, qualified to be the first First Lady ever subpoenaed by a Federal grand jury via “Travelgate” with charges that the White House had used alleged financial improprieties in the Travel Office operation to give the business to Arkansas friends of theirs, qualified to be implicated in “Filegate” which was the June 1996 discovery of improper White House access to hundreds of FBI background reports on former Republican White House employees; accusations were made that Hillary Clinton had requested these files and that she had recommended hiring the unqualified head of the White House Security Office. Senator Clinton was cleared in all cases, but it still makes one wonder…and we won't even go into all the mysterious deaths that have surrounded the Clintons through the years.

Mrs. Clinton is also eminently qualified, it seems, to accept donations illegally from Chinese nationals, too. This was a trick she picked up after her husband accepted money from Yah Lin "Charlie" Trie in 1996. Immediately after donating $460,000 to President Clinton's legal defense fund in March 1996, Trie sent a letter to President Clinton that expressed concern about America's intervention in tensions arising from China's military exercises being conducted near Taiwan. Trie told the President in his letter that war with China was a possibility should U.S. intervention continue. A month earlier, Trie had invited Wang Jun, chairman of CITIC and Poly Technologies (an alleged front company for the Chinese military ) to a White House "coffee" with President Clinton. Also busted in the 1996 investigation to illegal campaign contributions was another Chinese-born Clinton friend, Johny Huang. Prosecutors said Huang was responsible for arranging about $156,000 in illegal campaign contributions from employees of the Lippo Group banking conglomerate in Indonesia to the Democratic Party.

Last month, Hillary fund-raiser Norman Yung Yuen Hsu was revealed to be a fugitive on the run for the past 15 years in an investment fraud case. He is also suspected of having possibly broken campaign finance law. Fancy that. In August, an investigation by The Wall Street Journal revealed potential campaign finance irregularities involving Hsu, in his role as a "bundler" (someone who bundles contributions from many individuals into a lump-sum contribution to circumvent the limitation upon personal contributions from any one individual of $2,300) and his long-time associates, the Paw family of Daly City, California. Specifically, members of the Paw family made donations of over $200,000 to Democratic candidates since 2005.

These donations closely tracked those of Hsu in terms of timing, amounts and those donating. In addition, the donations appeared to be much larger than would be expected given the Paw's modest income. According to records obtained for the investigation, the Paws own a gift shop and live in a 1,280-square-foot house that they recently refinanced for $270,000. In the San Francisco area, a $270,000 house is pretty damned modest. William Paw, the head of the household, works for the U.S. Postal Service and earns approximately $49,000 a year. So this dude has donated his entire salary for the past 4 years to the Democratic Party? One focal point for the investigation concerns whether any of the donations by the Paws were reimbursed by Hsu, which would constitute a felony. In addition to the $260,000 he contributed to federal candidates, Hsu also contributed at least $330,000 to state Democratic candidates and state party committees and ballot initiatives during the 2004 and 2006 election cycles.

Hsu skipped out on a $2million bond when he failed to appear for a bail reduction hearing on September 5 at which he was expected to turn in his passport. A "no bail" warrant was immediately issued for his arrest and Hsu forfeited the $2 million. Authorities began to search for Hsu and on September 6, he was arrested by the FBI in Grand Junction, Colorado, after becoming sick and falling on the California Zephyr train headed for Chicago. Hsu now faces federal charges of unlawful flight to avoid prosecution. Hillary’s campaign is now being forced to give back $850,000 donated through Hsu. Some great friend, Hillary.

You’re barely qualified to walk & chew gum at the same time. If you’re such a great Senator for the people of upstate New York, why is it that Kodak, the last major company left in Rochester, is rumored to be thinking of moving out of state? Oh wait…Kodak out-sources most of its digital camera manufacturing to Chinon, a Chinese company. What a coincidence, Comrade Hillary.

Now…..would someone like to tell me how the United States Secret Service allows their charges to meet up all the time with nefarious and shady characters from China?
Posted by Steve: The Lightning Man at 9/11/2007 12:39:00 AM

For once, I have to... not so much disagree with you, as maybe find fault in your presentation, or at least the angle from which you're approaching the issue.

However, all of this being AGAINST things just makes people concentrate on the things they DON'T want. That's a whole lot of negativity. Nobody seems to be thinking about what they DO want.

So, while I do agree with you that Hillary is probably the worst of the bunch in terms of who I think would make a good President, let me suggest if you haven't already done so, that you look at ALL of the candidates, their positions, the voting records for those with previous gummint™ experience, their stated positions AND ACTIONS regarding the issues over the years, and choose somebody that you DO support.

That decision is rather easy for me- my #2 choice from 2004 is running again. The only one of his major platform points that I have any exception with is that he's pro-life... but I also think he has enough sense to realize that it's not the government's place to even be involved in that kind of decision in the first place, that a decision regarding abortion belongs at the state level, or even better, at the doctor/patient level.

So unless something changes radically over the next year, I don't mind telling anybody who asks that I plan to vote for Ron Paul.