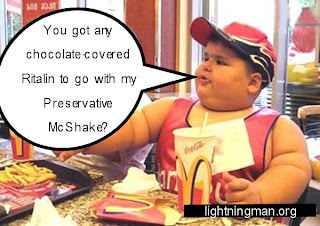 I swear I’m a freakin’ clairvoyant sometimes. At least three months ago I told you guys that preservatives and HFCS were messing with the DNA of the world’s kids.
(http://mojosteve.blogspot.com/2007/05/high-fructose-corn-syrup-will-be-end-of.html)

Now there’s all this hullabaloo and hubris over a study that just came out that links preservatives to ADHD.

A carefully designed study released Thursday in The Lancet, a leading British medical journal, shows that a variety of common food dyes and the preservative sodium benzoate, an ingredient in many soft drinks, fruit juices, and other foods, causes some kids to become more hyperactive and distracted than usual. You don’t say?

The research, led by Jim Stevenson, a professor of psychology at England's University of Southampton, involved about 300 children in two age groups. There were 153 3-year-olds and 144 8- and 9-year-olds from the general population. In all, 267 of the 297 children completed the study and were evaluated by teachers and parents for behavior changes. Over three one-week periods, the children were randomly assigned to consume one of three fruit drinks daily: one contained the amount of dye and sodium benzoate typically found in a British child's diet, a second drink had a lower concentration of the additives, and a third was additive-free. All the children spent a week drinking each of the three mixtures, which looked and tasted alike. During each week-long period, teachers and parents (who didn’t know which drink the kids were getting) used a variety of standardized behavior-evaluation tools — some observational and one computer-based — to size up restlessness, lack of concentration, fidgeting, and talking or interrupting too much.

Stevenson found that children in both age groups were significantly more hyperactive when drinking the stuff containing additives. Three-year-olds had a bigger response than the older kids to the lower dose of additives — roughly the same amount of food coloring as in two 2-oz. bags of candy. And, there were big individual differences in sensitivity. While the effects were not nearly so great as to cause full-blown ADHD, Stevenson nonetheless warns that "these adverse effects could affect the child's ability to benefit from the experience of school."

In response to the study, some pediatricians cautioned that a diet without artificial colors and preservatives might cause other problems for children.

“Even if it shows some increase in hyperactivity, is it clinically significant and does it impact the child’s life?” said Dr. Thomas Spencer, a specialist in Pediatric Psychopharmacology at Massachusetts General Hospital. “Is it powerful enough that you want to ostracize your kid? It is very socially impacting if children can’t eat the things that their friends do.”

True. It’s much better to have an obese hyperactive kid that’s loved by everyone than a healthy kid without a skewed sense of self-worth wrapped up in a Twinkie wrapper. To quote blogger Brett Levy: “What kind of insane society do we live in where we keep toxic chemicals in food all for the benefit of our children’s “socialization?” “

Besides, unless these kids get hooked on Ritalin, Adderal, and all that other yummy stuff, the doctors don’t get any kickbacks from drug manufacturers.