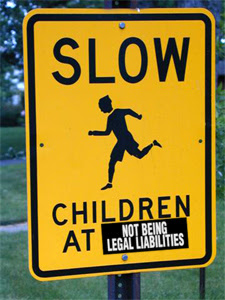 What sort of world are we living in now? Ladies & gentlemen, I bring you yet another wretched example of the Pussification of the American Sheeple. Schools across the USA have been banning the game of tag. Yes, TAG, as in tag, ‘yer it. It seems that children were complaining about being chased and harassed. Oh, please.

Last I knew, wasn’t the main point of the game was to get chased? And it’s not like it’s a gang of kids chasing you; quite the opposite. One kid chases an entire group. And hey, zipperhead, if you don’t wanna be chased, then STAND STILL. You’ll get tagged and be “it”, and then YOU get to do the chasing.

Everyone’s so shit-scared of kids running into each other and falling down and getting hurt, that traditional games & sports that we had at recess and PhysEd class like tag, dodge ball, touch football, and in some cases, even soccer are now banned.

Sweet mother of pearl. Are you shitting me? How are these kids gonna ever learn to be a part of a team, work together, resolve disputes, negotiate rules, and learn that in most aspects of life, there are winners and losers and not everyone gets a fucking prize just for showing up?

And then there’s the pandemic of fat-assed kids who are being denied the only exercise that they might otherwise get because someone’s so shit-scared they might fall and skin a knee and that the school will be held liable.

This isn’t just happening in one certain area, either. Schools in places like Santa Monica and San Jose CA, Wichita KS, Beaverton OR, Charleston SC, Colorado Springs CO, and Attleboro MA are circling the wagons, raising the white flag, and rolling over.

Don’t forget the No Touching policy that is in effect at Kilmer Middle School in Virginia that won’t let kids even shake hands. God forbid, it might be a gang sign or might offend some immigrant who refuses to assimilate into normal American society. And then there was an incident at a Denver area elementary school in 2002 when seven 4th graders got a week’s detention for making finger guns on the playground during a game of “Army vs. Aliens”, thus exhibiting “violent and aggressive behavior” and violating the school’s zero-tolerance policy of making imaginary guns out of their fingers. What a load of crap.

America’s next generation of kids, the ones that are gonna grow up and take care of this nation when I’m too old & feeble to do it myself, are going to be so micromanaged and socially repressed that they will never be able to handle an adverse crisis, thinking that if shit runs awry, they an go cry & say they don’t like it, and some sissy-assed administrative official will make it all better for their bloated obese selves. Great. We’re doomed. Time to move to the Australian Outback and raise wombats.

Wake up, Sheeple! Take America back from the Idiots, or suffer with the results. Getting hurt is part of life. Kids need to learn this at a young age, or it will just be devastating later on.
Posted by Steve: The Lightning Man at 9/02/2007 10:45:00 PM

So I would be in trouble for teaching my son how to cut up inner tubes to make "ammo" for a rubber band gun?

Stretch it from the front of the wooden gun back to the "trigger" clothes pin, aim and fire.

OMG. I also taught my daughter how to do that?

Yet...they survived all those year ago.

This ban on playing tag is so stupid. There are surely some schmucks out there getting paid off a lawsuit while kids now can't just have a good time on the playground. Oh wait, most schools don't have playgrounds anymore. It's just asphalt, that's all. No swings, no slides, no hopscotch grid.