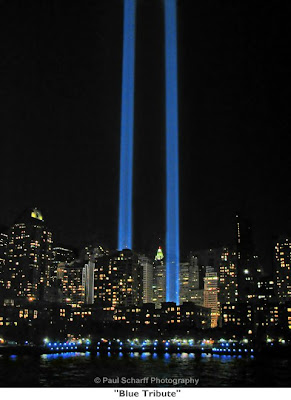 (Special thanks to Paul Scharff for his photo. www.PaulScharffPhotography.com)

Thankfully it’s not very often when something so horrific and earth-shattering happens that in coming years people will ask “Where were you when such & such happened?” For years the benchmark was the Kennedy assassination. That was six years before I was born, so I can’t give an answer to that one. I was home sick from school in 1981 when Reagan was shot. I was in 4th period study hall when the space shuttle Challenger blew up. I was sitting at home on a Saturday morning having coffee over the morning paper when Columbia blew up. I was on Mount Desert Island servicing an advertising account in April 1999 when Columbine happened. I was at work at the Walterboro dairy branch when Virginia Tech happened. When the Gulf War kicked off in 1991, I was standing in the TV room in my barracks at Fort Riley, Kansas. But I think the defining “where were you” moment of my generation will forever be September 11, 2001.

I’m sure every single one of you remembers where you were and what you were doing. I was standing in front of the TV in a towel on my way from the shower to get dressed for work that Tuesday morning, looking at footage of a fire at the WTC North Tower. They said a plane had hit the building, and all I could think of was a small Cessna, until they said it was a “passenger plane”, and even then I was thinking a small puddle-jumper, not a Boeing 767. Then, as I watched, a second plane struck the South Tower, and right then I knew this was no coincidence. I quickly finished getting dressed and headed to work with a sick feeling in the pit of my stomach, and as soon as I got to work I heard that another aircraft had hit the Pentagon. That convinced me that there were coordinated terrorist attacks taking place and my mind started racing in CT Mode, thinking back to any & all counter-terror training I received as an MP in the Army. My workplace wasn’t all that far from Charleston Air Force Base and Charleston International Airport, and I started scanning the skies for Bad Things.

At work, everyone was tweeked about what was going on, and I volunteered to run the 5 minutes back to my house for a set of rabbit ears to attach to the TV we had at work to watch training videos. On the way back to work, Howard Stern had stopped all his usual shenanigans and made the command decision to cut his show short and turn the airwaves over to the news people at his New York studios. I remember thinking that was a very professional move on his part, and that you knew things in NYC were bad when Stern got serious. Once back at work we set up the TV, and no one could say a word as we watched the footage. After the first tower collapsed we were all in a sort of shocked daze.

Right about that time the reporters stated that all flights in the nation were being grounded immediately and it occurred to me that I wasn’t hearing the usual jet traffic that was common overhead. And car traffic was a lot less out on super-busy Dorchester Road than was normal. In due course the second tower collapsed and then news about the plane crash in Shanksville, Pennsylvania was broadcast. And somewhere in that span, I heard a jet overhead and ran outside to see what was going on. It was a Boeing 737 that looked to be painted orange and yellow, and it was making a wide circle around Charleston on approach to the airport. Turns out that it was an Air Jamaica flight that was one of the last flights still in the air on the east coast, and they were told to land at the far side of the airport away from the Air Forces hangars until their status could be verified.

I was scheduled off work the next day, and at about 10:30 AM I pulled into the parking lot of the old Red Cross donor center in West Ashley. I felt compelled to do something, anything, to lend a hand. The place was already packed, with a line stretched around the back of the strip mall where the center was located. Not long after we arrived an official told us from that where we were, it could be as much as an 8-hour wait. A few people left, disheartened, but the rest of us stalwarts stayed there in line for what ended up being 10 hours to the time I left the donor center minus a pint of prime AB+. The poor lady in line in front of me found out that after waiting over 9 & a half hours that her blood lacked enough iron to donate, and she was sent home dejected.

A couple weeks after 9/11, I got to thinking that since I’d never actually been in New York City proper, I’d never been in either tower nor had I ever really seen the WTC up close. A memory came to mind at that moment, from October 13, 2000. That was the day I moved back to SC after 7 years in Maine, and as I was coming off the Tappan Zee Bridge over the Hudson River, I looked over real quick towards the city and even from that distance I could faintly see the WTC towers. Little did I know that would be the last time I’d ever see them standing and that less than a year later they’d be gone.

As an Army veteran, I grieved the loss of my fellow comrades-in-arms at the Pentagon. As a former member of the law-enforcement community, I keenly felt the loss of so many firefighters and police officers. As a hockey fan, I mourned the loss of Los Angeles Kings scouts Garnet "Ace" Bailey and Mark Bavis (also a former South Carolina Stingray) on United 175, and as an American and just as a human being, I felt an emptiness at the loss of all the rest. Between the two towers, the Pentagon, and Shanksville, some 3000 people lost their lives, victims and rescuers alike. On this sixth sad anniversary, I salute you all. You are not forgotten. The terrorists did not win, nor will they ever. America will not be diminished, and united we shall stand evermore.
Posted by Steve: The Lightning Man at 9/11/2007 01:20:00 AM