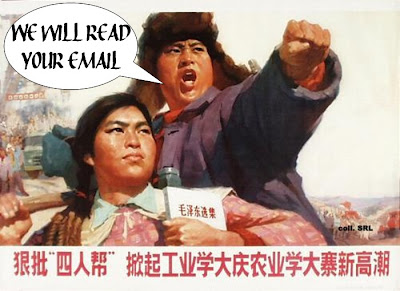 Did I not tell you guys a couple weeks ago that China is NOT our friend?
(http://mojosteve.blogspot.com/2007/08/choke-on-me-elmo.html)

Just this past week it was revealed that China was caught trying to hack into Pentagon and other military computers, and that it’s been going on for quite some time. A report on the front page of the Financial Times claimed that in June hackers from the Chinese People’s Liberation Army were caught trying to break into the network of the office of none other than Secretary of Defense Robert Gates. That’s pretty ballsy.

In a 2005 article in Time Magazine, it was reported that sometime on November 1st, 2004, hackers sat down at computers in Guangdong Province, China and set off once again on their daily hunt for U.S. secrets. Since 2003 the group had been conducting wide-ranging assaults on U.S. government targets to steal sensitive information, part of a massive cyber-espionage ring that U.S. investigators have codenamed Titan Rain. On this particular night, the hackers' quarry was military data, and they were armed with a scanner program that searched vast military networks for single computers with vulnerabilities that the attackers could exploit later.

They hit hundreds of computers that night and morning alone, and a brief list of scanned systems gives an indication of the breadth of the attacks. At 10:23 PM (PST), they found vulnerabilities at the U.S. Army Information Systems Engineering Command at Fort Huachuca, Arizona. At 1:19 am PST, they found the same hole in computers at the military's Defense Information Systems Agency in Arlington, Virginia. At 3:25 am, they hit the Naval Ocean Systems Center in San Diego. At 4:46 am PST, they struck the Army Space and Strategic Defense installation in Huntsville, Alabama. As with prior attacks, the targeted networks were unclassified systems; the military's classified networks are not connected directly to the Internet. But even unclassified systems store sensitive information and provide logistics support throughout the armed forces. Government analysts say the attacks are ongoing, and increasing in frequency. But whether the Titan Rain hackers were gathering industrial information or simply testing their ability to infiltrate a rival nation's military systems, the U.S. government is taking the threat very seriously.

We’re not alone either. It’s also been reported recently that Chinese cyber-attacks have hit the British Foreign Office and other key departments. While Britain has kept quiet about the attacks, Angela Merkel, Germany's Chancellor, is reported to have raised the issue of similar Chinese attacks on her government's computers during a visit to Beijing.

Is this part of China's efforts at building up its "asymmetric warfare" capabilities? The principle behind this kind of warfare is to not confront opponents head-on in a conventional battle. China may be calculating that it would not fare very well against Western countries in a straight confrontation given its current military capabilities. Instead, determining the vulnerabilities of these countries' information infrastructure and undermining them in times of conflict may be a more cost-effective way to attack should things go sour in the future, using a tactic now being referred to as “pressure point warfare”, or the attacking of specific computer network nodes, the cross point of lines in a network, to paralyze the adversary. Their methods are likely to include attempts to overload US computer systems with meaningless data and spam, tampering with websites, and e-mailing computer viruses to American government employees.

Yes, indeed. Toxic poisons and lead paint and tainted pet food…..and hacking into your MySpace. Thanks a lot, President Nixon, for setting the stage for President Clinton to sell the White House to Beijing. At least we got some freakin’ panda bears for rent in the deal.
Posted by Steve: The Lightning Man at 9/12/2007 01:49:00 AM