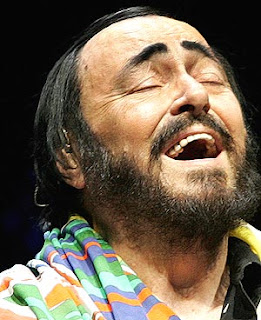 The world lost one of its greatest voices this week.

I was deeply saddened at the death of Luciano Pavarotti this week at the age of 71, after a long battle with pancreatic cancer. I’m not necessarily a fan of opera on the whole, but to listen to that man’s voice as he sang "Ave Maria", or the "Vesti La Guibba" aria from the opera Pagliacci would make every hair on my neck stand up. It was breathtakingly beautiful to hear him sing.

Officials in his hometown of Modena said that upwards of 100,000 people came to view his casket as he lay in state at the cathedral this small northern Italian town. I’ve been to Modena, in April of 1990, and the citizens of this beautiful town were all justifiably proud of their favorite son. The final funeral Saturday itself was invitation-only and thousands of mourners watched on giant screens erected in Modena’s central plaza. On hand in attendance were the Italian premier, Romano Prodi, U2 singer Bono, film director Franco Zeffirelli and former UN Secretary-General Kofi Annan. Italy's Air Force precision flying team flew over the cathedral at the end of the service, releasing red, white and green smoke in the colors of the Italian flag.

Pavarotti's white maple casket , covered in his favorite sunflowers lay before the altar, with his wife, Nicoletta Mantovani, looking on. Sitting nearby were Pavarotti's three daughters from his first marriage. The service began with a message of condolence from Pope Benedict XVI, saying that Pavarotti had "honored the divine gift of music through his extraordinary interpretative talent".