What Am I Listening To? 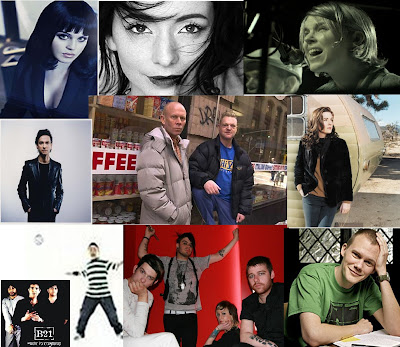 I don’t listen to a lot of regular radio anymore. My local alternative station abruptly shit the bed and changed formats to pre-programmed lite schlock-rock, and if you read my blogs regularly you know my disdain for Top-40 radio on the whole. At home, I listen to a lot of the Sirius channels, but mostly the New Wave channel and they don’t really play anything newer than 1990. I catch some new stuff via recommendations from friends, and from catching the occasional song on VH-1 or IMF. So…..what exactly am I listening to these days?

•Shiny Toy Guns: two songs, “You Are The One” and “Le Disko”. Part synth-pop, part rock, all cool. STG are playing a show at the Windjammer Tuesday night and all signs point to a FREE show for the over-21 crowd.

•Erasure: “Light at the End of the World”--The full cd is yet another incredible release from Erasure. I dare you to sit still during “Sucker For Love”.

•Erasure: “Golden Heart” (GRN’s Golden Glow Mix)—This was a fan club-only free download for one of the album tracks to the above cd. Yayyy for free downloads!

•Dave Gahan: “Kingdom”. The first single off his upcoming cd “Hourglass”. A really solid song from the Depeche Mode front man. The chorus soars above a deep murky wall of sound.

•Just Jack: “Snowflakes”—Very clever song from earlier this year, a stream of consciousness rap set over The Cure’s classic song “Lullabye”. Something tells me the guy takes his name from the in-joke on Will & Grace.

•B21: “Darshan”—I first heard this song a couple years ago on the soundtrack to “Bend It Like Beckham”. It’s a wicked dance groove set to a Bhangra beat and sung in Hindi. I have no idea what the song’s about but it sounds great.

•Brandi Carlile: “The Story”—Thanks to VH-1 for helping me discover this song, a delicious blend of Sarah McLachlan’s frailty and Melissa Etheridge’s power.

•The Last Town Chorus: “Modern Love”-This song was featured on an episode of Gray’s Anatomy last year. It’s a cover of David Bowie’s song, but slowed down into a somber ballad punctuated by pedal-steel guitars.

•Greeeen: “Hajikero Hajikero”—I caught this song by total accident on IMF. It’s in Japanese so I again have zero clue what the song is about. It sounds like a poppy blend of rock and rap and the video is super cute. Catchier than the flu in January.

•Kelly Osbourne: “One Word”— Before you start throwing rocks at me, listen to the song. It really amazed me at how good it is. Very old-school 1985 New Wave gloominess, unless you’re listening to the Chris Cox Remix, in which case it’s an ethereal dose of bum-wigglery. It’s over a year old now actually…I just refuse to put it out of my MP3 playlists.


If you’re bored senseless and looking for something to listen to, go check these songs out on iTunes or YouTube and see if you like them. Maybe you too will discover something new & interesting.
Posted by Steve: The Lightning Man at 9/25/2007 10:34:00 AM

Brandi Carlile and The Last Town Chorus... you have great taste.

Nice, what a good mix of genres. I haven't heard all these so I'll check some out.

I listen to KROQ. And to NPR. I wish the awful "urban" stations would go bankrupt.