And like I said before, Russia's not our friend either 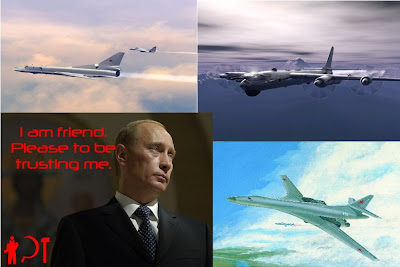 Did I not say a month or so ago that Russia’s government is NOT our friend?
(http://mojosteve.blogspot.com/2007/07/trust-me-comrades.html)

Maybe I’m just having 1987 flashbacks to the Cold War while reminiscing about my high school days 20 years ago, but I could swear that the news has been full of incidents of the Russian Air Force sending out probing flights of ancient Tupolev Tu-95 Bear bombers to the edges of the sovereign airspace of Iceland, within cruise missile striking distance of the US, and towards the US base on Guam, and alongside Tu-22M Backfire and Tu-160 Blackjack bombers in groups of up to eleven planes around Norwegian airspace. One of the Norwegian flights turned south towards Scotland, trailed by Norwegian F-16’s and were intercepted by British Tornado fighters in British airspace before returning to their bases.

It’s been years since the Kremlin has sent nuclear-capable bombers on such overflights, and it smacks of the sort of Cold War saber-rattling made famous by the former Soviet Union. Granted, the Bear is a decrepit old 1950’s airframe, and the Backfire dates back to the early 70’s, but the Blackjack is pretty modern, based upon our B-1B Lancer and only about 20 years old.

Speaking after Russian and Chinese forces completed major war games exercises for the first time on Russian turf, Vladimir Putin said a halt in long-range bombers' flights after the Soviet collapse had affected Russia's security as other nations had continued such missions — an oblique reference to the United States. About the flights, our best-buddy Putin stated, "I have made a decision to resume regular flights of Russian strategic aviation. We proceed from the assumption that our partners will view the resumption of flights of Russia's strategic aviation with understanding… Starting in 1992, the Russian Federation unilaterally suspended strategic aviation flights to remote areas. Regrettably, other nations haven't followed our example. That has created certain problems for Russia's security…Starting today such tours of duty would be conducted regularly and on the strategic scale. Our pilots have been grounded for too long; they are happy to start a new life." I bet. Flying an 18-hour mission over water is always more fun than being an unpaid guy on the ground making vodka from de-icing solution.

The announcement comes amid a growing chill in the U.S.-Russian relations, strained over Washington's criticism of Russia's democracy record, Moscow's strong criticism of U.S. missile defense plans in Poland and the Czech Republic, and differences over crises such as the Iraq war. Plus, rising oil prices have given Putin some extra cash with which to flex his muscles again. Russia recently planted a titanium reproduction of its flag at the North Pole and claimed the North Pole as Russian soil, test-fired a new ballistic missile supposedly capable of thwarting Washington's fledgling missile shield, and has blocked moves at the U.N. aimed at granting Kosovo formal independence from Russia's ally, Serbia.

And just this morning I read a report on the Russian military testing a new thermobaric bomb based upon the American MOAB (Massive Ordnance Air Blast, nicknamed the Mother Of All Bombs.) They are calling theirs the Dad of all Bombs, and tests have shown that the new air-delivered ordnance is comparable to a nuclear weapon in its efficiency and capability, according to Colonel-General Alexander Rukshin, a deputy chief of the Russian military's General Staff, speaking on Russian Channel One television. Thermobaric weapons explode in an intense fireball combined with a devastating blast, producing a terrifying nuclear bomb-like mushroom cloud and sending a massive shock wave created by the air burst and high temperature. Channel One said that while the Russian bomb contains 7.8 tons of high explosives compared to more than 8 tons of explosives in the U.S. bomb, it's four times more powerful because it uses a new, highly efficient type of explosives that the report didn't identify. While the U.S. bomb is equivalent to 11 tons of TNT, the Russian one is equivalent to 44 tons of regular explosives. The Russian weapon's blast radius is 990 feet, twice as big as that of the U.S. design, the report said.

Feel that cool breeze coming in from the Cold War memory banks? And don't forget that they were recently testing out a new ballistic missile system that supposedly renders our proposed Euro-based missile shield obsolete before we can even build it.

Thanks for your email Steve.
I have bookmarked your blog and will come back to read this post about Russia another time, for now bedtime as it's after midnight in my neck of the woods.

I cordially invite to visit my blog and welcome any comments you may make.

Gosh, I remember those days of thinking we were gonna get nuked. Every spy movie had some sort of evil Soviet bloc character. And then, overnight, we're homies with the Russian's and Moscow is a nightclub. Craziness. I think there's a whole new generation that needs to see that movie "The Day After".

Glad you addressed Russia and previously China. They are often overlooked and yet remain notable adversaries to the U.S. Great posting!