After 18 years, a hero comes home 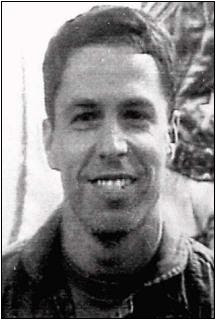 It was January 16, 1991. It was sometime shortly after dinner, I believe, on a Wednesday evening. We’ll call it, say, 7:30 PM. That put it at about 3:30AM local time on January 17 in Iraq. I was sitting by myself in the TV room of my barracks behind the MP station for the Camp Funston subsection of Fort Riley, Kansas. The guys who weren’t on duty were mostly in their rooms, leaving the big-screen TV all to me, which meant I could shine my boots and watch CNN in peace without any of my platoon-mates bitching about me being such a news hound.

In truth, though, most of us were paying more attention to the news as of late, since CNN was being more forthcoming about the developing situation in the desert than the Army was. The bulk of the First Infantry Division had already deployed from Riley and we were all speculating as to whether we were getting the call up to join the division to beef up the division’s 1st MP Company or the other Riley-based unit, the 977th MP Company. Some of our platoon-mates were already in-theater, having gone ahead with the initial deployment of the division. My own room mate was already there.

I looked up from my boots with an agape jaw as CNN started reporting the beginning of the air war with live reports from the al-Rashid Hotel in Baghdad by reporters Bernard Shaw, John Holliman, and Peter Arnett.

“This is Bernie Shaw. Something is happening outside...Peter Arnett, join me here. Let’s describe to our viewers what we’re seeing...The skies over Baghdad have been illuminated...We’re seeing bright flashes going off all over the sky.”

I shouted for the guys to get their asses to the TV room, post-haste, and inside of a minute, there were fifteen or twenty guys crowded around. No one spoke. We all just stared and watched as CNN reported the opening moves of a war that we were uncertain of soon joining.

A few hours later the Pentagon reported that our first confirmed loss off the air war was a Navy F/A-18 Hornet pilot off the USS Saratoga named Michael Scott Speicher. To this day I’ve never forgotten his name or the fact that they never found him. IN December 1993, a group from Qatar found the wreckage of Speicher’s Hornet in the desert, but it was two more years before investigators finally made their way to the crash site.

From a big article series I read on Speicher’s case that originally appeared in The Virginian-Pilot in 2002, it seems that the jet had lost power, gone into a flat spin and dropped almost straight to the desert floor. Speicher's jet had not, as first thought, been blown to bits in the sky either by a SAM or by a MiG-25, as conflicting reports had stated. It seemed also that Speicher had ejected from his aircraft.

Well, today the mystery is put to rest. The family has been notified that Speicher’s remains had been found and identified by the Armed Forces Institute of Pathology through a jawbone and dental records. This was after an Iraqi came forward last month with new information about the crash site and where the body had been buried after the crash by local Bedouins.

We’ll likely never know for sure 100% what happened to “Spike” Speicher. Was he shot down by a missile or by an Iraqi fighter? Was the jet downed by a mechanical mishap? Did Speicher die during the ejection, or did he survive to be captured, and later executed and his body dumped?

None of that really matters. It won’t bring him back. What matters is that his family and friends, his comrades in arms, and the nation can have closure. Scott Speicher has been found, and he’s coming home. 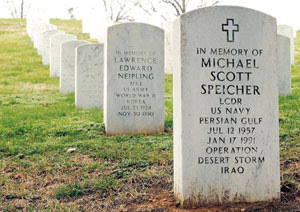 this will be a bitter sweet moment for his family. hopefully this bit of closure will bring them peace. now for the rest of our pow/mia's from viet nam and korea...

One report I heard said that the black box had survived and confirmed that he ejected and presumably survived the ejection. I've heard no reports on how he died.

In 1991, I was in Washington DC at a class. My brother was in Saudi Arabia on a flight line (Air Force). His based was attacked by Scuds a couple of times, and there was the fear of gas, but that never occurred.

I thank Speicher's family for his service and offer my condolences. I also thank you for your service.

Hey lightning man. We like the same music and see largely eye to eye politically.

As far as lightning goes check out on my blog, JULY 24th (No tinfoil hats this time: pt 2...) in the archives where I photographed a lightning strike 3 ft away(no kidding). I grew up listening to Depeche Mode, Front 242, New Order and all the others you named. I went through a long Techno phase after that but now I am going back to my roots and and at the same time experimenting with remixing alot of that old music using "Ableton" Live which is a computer oriented Remix/Production and even DJ software. It is much fun, I am glad to see there are a few others who listened to the same music I did growing up who aren't communists. Feel free to hit my blog up anytime. My cat that ypu see in my pic is Kee, She is an Asian Leopard/Margay/domestic mix and is closer to a zoo animal than a house pet. She is a very friendly loving animal except to strangers and varmits which she is prone to attack.
Nice blog too BTW. I will join your ranks shortly

I am going to give you a promo on the blog I co-host with KOOK. It should bring you some new traffic and hopefully you will join our little group of blogger friends as I like your blog and especially your artwork

I was glad to see you have the blog I co-host as one to watch. Thank you for your support. I don't know if you added our blog because of my recent posts here or you already followed it but either way thnks for the support.

And thanks for supporting the family of a fallen hero who the media and most of America had forgotten. I am old enough to remember Desert Storm and remember the story of the soldier that was presumed captured or dead. Most people younger than I do not. The media plastered the death toll in Iraq on TV daily when Bush was in office. While I do not in any way claim to be a Bush supporter, the numbers of dead and wounded coming out of Afganistan are creeping up and yet there is a media silence surrounding it since Obama added troops, yet added rules of engagement which handcuff our troops. Snatching defeat from the jaws of victory will not leave the Obama Administration unpunished.

Rest in peace, brother. Your mission is accomplished..Amen my friend.

Your last phrase there was worthy of a whole box of Kleenex..oh, the tears. Beautifully said, Lightning.

God rest his soul and be with his family. I'm glad to say I remembered this situation, too, when I heard they'd found him..I instantly remembered that name. All Americans should....It's good to hear a soldier like you remembering him so poignantly and good to see you remember him in this post.

And thank you so much for your service.

Awesome post! I found this site via Andrew33 at KOOK'S Manifesto. I'll have to thank him.

First, I want to thank you for YOUR service to this country. It's appreciated more than you know.

Second, may all the angels of Heaven be with this family. They can close this chapter and hopefully find peace.

Thanks again, lightning man! I'll be sure to stop back again.

His family must be relieved to be able to lay him to rest, finally.