The Brits are getting ticked off at No.10 Downing 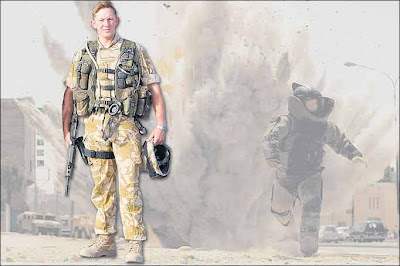 Another weekend comes to a close, and in an hour or so I'm off to bed so I can get up & slay the corporate demons that haunt my daily existence. The weekend flies by so fast. I try to sleep as much as possible to try and make up for the sleep I lose during the week.

I try to write as much as possible on the weekends, and you'll have noticed that I tend to post 3 to 4 times some weekends and only a couple times during the week. This month is an exception to the rule, as I've been blessed enough to have been able to write a lot this month. In fact, this has been my most prolific month to date. My goal was to better my yearly tally of posts in each successive year, which I've done, and I'm so, so very grateful to you guys, my readers, who are letting my corner of the Interwebz grow & flourish, and let me know that maybe I'm not wasting my time doing this after all. This month saw me more than double the ranks of my subscribers, and that really warms my heart. Thanks, guys.

Tonight I wanted to send you over across the pond to read a couple of fascinaing articles from a British newspaper, The Sun. Yeah, I know what you're thinking; it's a rag, a tabloid, basically a New York Post with a topless chick on page 3....but I read it along with a couple other British papers online to get a different feel for the world's news than just by reading the American news sites. (Oddly though I avoid the BBC...too dry for me).

The Sun and The Daily Mail are very much behind the British soldiers in Afghanistan, much more so than the token Support Our Troops given by the US Mainstream Media (MSM), mostly because our MSM is a Liberal Cesspool. Today's Sun has a couple of great articles about British soldiers...in fact, The Sun has just started what looks to become a series of articles calling the government to task. A quote from one of their articles:

Our leaders are pretending the war isn't happening. Today, The Sun asks the Government and Gordon Brown: Where is your leadership?

As the hearses carrying our heroes are saluted in silent Wiltshire streets, Mr Brown and his ministers are missing in action.

There is an air of unreality in the country. While Our Boys are dying, a fool who is out of his depth and with little experience is in charge of defence.

Wounded heroes are fobbed off with pittances and generals are ignored when they beg for better kit. Our troops deserve better. Much, much better.

Mr Brown has taken the country to war but is ducking responsibility for the conduct of it. The tradition of our country is that in wartime, the Prime Minister takes charge.

This first one is a brilliant portrait of retired Major Chris Hunter, the Royal Army's top bomb squad guy.
http://www.thesun.co.uk/sol/homepage/features/2614777/Bomb-disposal-heros-story.html

And the other article details Prime Minister Gordon Brown's trip to Afghanistan, looking very uncomfortable to be there around soldiers who don't care for him much and not staying very long at all. The crux of the article is how Brown got skewered by a question by a young Lance Corporal who wanted to know why the troops were still being assessed the British equivalent of income taxes while deployed outside on England in a war zone.

Another article shows a soldier's mother using her own money to buy her deployed son better equipment than what crap the Army issued him so that he'll survive his latest deployment intact. Reminds me of our own boys getting folks to send them armor plating for Humvees and better body armor early in the war. 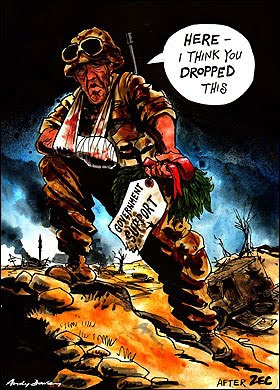 Sounds like Brown has the same syndrome Obama's got..They say Obama barely sails through rooms of the injured WHEN he goes, of course (rare)...Bush stopped, wanted to hear stories, meet families, hugged the guys, encouraged them.
Not the LEFT.

I honestly think the Lefties are thinking "Who the HECK would WANT to fight? What kind of JERKS are these I'm supposed to honor?"
And, of course, I think the feelings mutual on the second half of that sentiment, huh?
Seen Obama salute the soldiers at the bottom of the steps when he gets off a plane or heli? sickening.

The Brits are getting ticked off..Americans are just starting to get ticked at THE ONE. only 3 1/2 years to go. ARGH

I hope you have a good work week...chin up, my friend.xx
and thanks for your absolutely amazing comments at my place...they really touched me

Getting pissed off at Whitehall gets you nothing but pissed off. They are the betters and are prepared to see that all take the medicine they need.

The only thing that comes to mind is that Liberals are being seen for who they really are. Libs can’t stand this because every time someone gets their mind right Libs lose a little more power. When a Liberal is forced to actually defend his or her self, the usual reaction is name calling and yelling

With idiots like Obama and Brown in charge, I'm amazed anyone at all signs up for the Service.

It takes an incredible love of Country to serve under these asshats and the daily example of ineptitude and scorn they show for the soldiers.

There was a maxim we followed when I was in the Army:

We, the willing,
led by the unknowing,
are doing the impossible
for the ungrateful.
We have gone so far for so long
and done so much with so little
that we are now qualified
to do anything with nothing...