And they said Plaxico means "peaceful"? 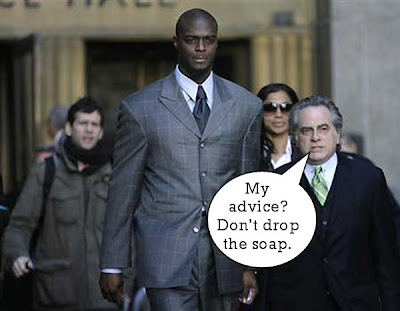 Back in December, you may recall that I read the riot act to NFL-star-turned-idiot Plaxico Burress.
(see http://mojosteve.blogspot.com/2008/12/is-that-gun-in-youre-pants-or-are-you.html)

Well, if you missed it and are too lazy to go read it, Burress was illegally carrying a concealed handgun in a New York City club and it went off, shooting him in the thigh.

Well, yesterday our errant genius and one-time Super Bowl star accepted a plea bargain with a two-year prison sentence. With time off for good behavior, Burress will likely serve 20 months. He will be monitored during an additional two years of supervised release. Afterwards, he’ll act all contrite, make a couple of insincere PSA's, and then be allowed back into the NFL where some desperate team that needs a receiver on the cheap will snag him up.

Think I’m full of shit? Just look no further than quarterback-turned-convict-turned-quarterback-again Michael Vick, who lost his multi-million dollar contracts with the Falcons and with sponsors after being busted for running a dog fighting operation. In fact, he had to pay back the Falcons $20 million bucks. He served his time, worked a construction job making even less than me while living in a halfway house upon his release, and was just signed by the Philadelphia Eagles, making far more than me. 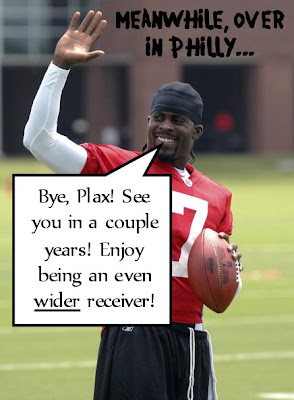 Millions and millions of dollars and you had nothing better to do than watch two agitated animals kill each other?

And while we’re at it, I may as well kick another football hero in his proverbial cherries, even though he’s dead and can’t defend himself. Call me crass and callous, but I had no sympathy for Steve McNair. His wife and kids? Yes. Him? No.

Dude had a wife and two young kids, in addition to two other kids, and instead of being at home with them, he was out with his 20-year-old mistress. She’d just been busted 2 days prior driving an Escalade registered in both their names while under the influence (underaged no less) and was suspicious that he was dicking around on her as well as his wife…so she grabbed up the handgun that she’s just bought from a convicted murderer and killed him and then herself.

What is it with high-dollar football stars? Practices aside, you work for four hours one day a week for less than five months. Maybe you just have too much time on your hands, and the money & fame goes to your heads?

OJ Simpson’s litany of crimes, from cutting off his wife’s head to kidnapping dudes over his shitty memorabilia; Tank Johnson’s felony weapons charges; Steve Foley, who was shot 3 times by a cop after a high-speed DUI car chase; and that one-man crime spree himself, Pac-Man Jones….morons all.

Welcome to the Morons Club, Plaxy. Your cell is being prepared. Better stock up on smokes and AstroGlide to make your next 20 months or so mo’ easier… 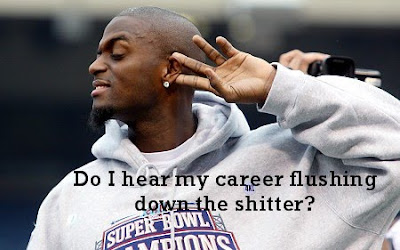 Stock up, lol. Not too much sympathy for these morons either.

what's with the astroglide reference?
you've changed significantly since i knew ya. i hope this is anecdotal knowledge and not first hand experience of which you speak. gotta stick up for my MSU guy, even if he did shoot himself in the dick, i mean leg.

Dude, just cuz he *went* to Michigan State don't mean he learned anything...